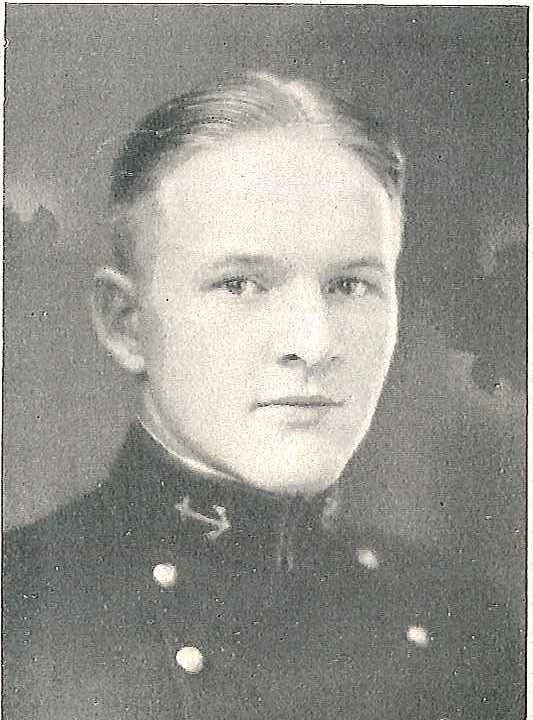 Heywood Lane Edwards was born in San Saba, Texas, on November 9, 1905, son of Winston Chapman Edwards, Sr., and Mrs. (Louise Smith) Edwards. He was graduated from San Saba High School in 1922, and on June 28 of that year entered the US Naval Academy, Annapolis, Maryland, on appointment from the Seventeenth Congressional District of Texas. As a Midshipman he was a member of the Wrestling, Football and Boxing Teams. He was graduated and commissioned Ensign in the US Navy on June 3, 1926, and was subsequently promoted to Lieutenant (junior grade) on June 3, 1929; Lieutenant, June 30, 1936; and Lieutenant Commander, to date from August 1, 1940.

Following graduation from the Naval Academy in 1926, and a brief course of instruction in aviation there the same summer, he reported to USS Florida on September 15, 1926. He served as a junior officer on board that battleship until February 24, 1928, when he returned to the Naval Academy for duty with the Olympic Squad. On July 11 he sailed for Amsterdam, Holland, where as Captain and Light Heavyweight on the 1928 Olympic Wrestling Team, he participated in the Olympic Games.

Upon his return to the United States on August 22, 1928, he reported to USS Reno, and served consecutively in that cruiser and the two destroyers, USS Kennedy and USS William B. Preston, from September 28, 1928 until January 4, 1931. At that time he was transferred to the Submarine Base, New London, Connecticut, where he completed the course in submarine instruction, and was detached on June 12, 1931. From June 30, that year, until May 20, 1933, he had successive duty on board USS Bonita, USS Bass and USS Barra Cuda, units of Submarine Division TWELVE, Submarine Force.

Returning to the Naval Academy on June 27, 1933, he completed the postgraduate course at the School of the Line, and was detached in May 1935 with orders to the Naval Boiler Laboratory, Philadelphia, Pennsylvania, for further instruction. On June 28, 1935, he joined USS Detroit, flagship of Commander Destroyers, Battle Force. He continued service in that vessel until May 31, 1938, when he was detached for a tour of duty at the Norfolk Navy Yard, Portsmouth, Virginia, which he completed on April 1, 1940.

On April 6, 1940, he assumed command of USS Reuben James, a destroyer operating in that Atlantic. The Reuben James was sunk on the night of October 30-31, 1941, by torpedo, while convoying in the North Atlantic, west of Iceland. Lieutenant Commander Edwards, her Commanding Officer, and several other officers were given up as lost after an intensive search of the area, during which forty-six men were rescued.

The USS Heywood L. Edwards was commissioned on January 26, 1944, and in nineteen months of brilliant combat service in the Pacific during World War II, participated in the Saipan-Tinian operations, May 29 to July 29, 1944; Palau, September 5 to 29, 1944; the Battle for Surigao Strait, October 24-25, 1944; Iwo Jima, February 10 to 27, 1945; and the Okinawa campaign from March 21 to July 28, 1945. “For outstanding heroism” during those periods against enemy Japanese in World War II, that destroyer was awarded the Navy Unit Commendation by Secretary of the Navy James Forrestal, which concludes with: “Superbly handled by valiant officers and men, the Heywood L. Edwards rendered distinctive service, sustaining and enhancing the finest traditions of the United States Naval Service.”