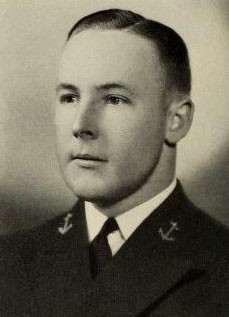 Charles Walter Coker was born in New Albany, Mississippi, on August 31, 1914, son of Mrs. Lorene Robbins Coker and the later Mr.W.B. Coker. He attended New Albany High School and Marion Military Institute, Marion, Alabama, and in 1933 entered the US Naval Academy, Annapolis, Maryland, on appointment from Mississippi. As a Midshipman he played Plebe and Class football. He was gradated and commissioned Ensign on June 3, 1937, and through subsequent advancement attained the rank of Commander, to date from November 1, 1945.

After graduation from the Naval Academy in June 1937, he was assigned to the USS West Virginia, and during his two years duty in that battleship served as a junior officer in gunnery, engineering and communications. From June to December 1939 he served as Communications Officer on the Staff of the Commander Battle Force, Pacific Fleet, then served until July 1941 as Gunnery and Communications Officer of the USS Monaghan, a unit of Destroyer Squadron One, Battle Force.

In July 1941 he transferred to the USS Arizona, as Gunnery Officer, and was serving in that capacity when that battleship was sunk in her berth at Pearl Harbor by the Japanese on December 7, 1941. She took to brunt of the sneak attack, her personnel loss the heaviest of all the ships in the harbor, but as she settled in the oily, muddy water of the harbor, Old Glory was still flying proudly from her stern.

A survivor of that disaster, Commander Coker became Gunnery Officer of the USS South Dakota in January 1942, and continued service in that capacity until December 1943, participating in operations of Santa Cruz Island in October 1942, Guadalcanal (Third Savo) November 1942, and Gilbert Islands in November and December 1943. During the remaining period of the war he served as Gunnery Officer on the Staff of Commander Amphibious Force, Pacific Fleet. He was awarded the Bronze Star Medal, with Combat “V,” and the following citation:

“For meritorious service as Assumption and Smoke Officer of the Joint Expeditionary Force, during operations against enemy Japanese forces in the Marianas Islands, Iwo Jima and Okinawa from April 1, 1944, to May 17, 1945. Serving with distinction during this period, Lieutenant Commander Coker effected the replenishment of bombardment ammunition under unprecedented and extremely difficult conditions and planned and prepared for the use of smoke. By his untiring efforts and capable direction, (he) contributed materially to the success of Naval gunfire support and assisted greatly in reducing the losses of our vessels and personnel at the objectives…”

In November 1945 he reported to the Puget Sound Navy Yard, Bremerton, Washington, where she served as Assistant Captain of the Yard until December 1947. During the next eighteen months he was at sea, serving as Executive Officer of the USS Bronx (APA-236), which participated in occupation operations in the Asiatic Area from January 23 to May 9, 1948.

In June 1949 he reported to the US Naval Reserve Training Center, Newark, New Jersey, for a tour of duty as Inspector-Instructor, after which, from February 1952 until July 1953, he was at sea as Commanding Officer of the USS Carter Hall, which operated in European waters for five months in 1953. In August 1953 he became Executive Officer if the US Naval Station, Norfolk, Virginia, and remained on duty there for more than three years. On November 9, 1956, he was again ordered to duty afloat, this time as Commanding Officer of the USS Mattaponi (AO-41), and under orders of September 30, 1957, he transferred to duty as Commander Yagr Division 11.