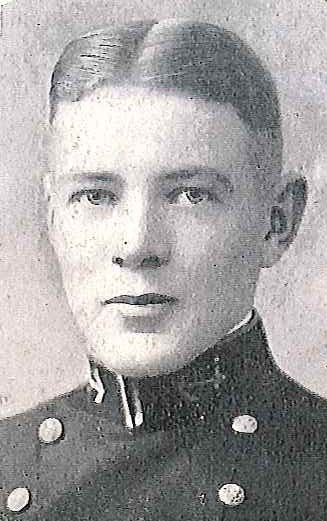 John Leslie DeTar was born in Lincoln, Nebraska, on September 21, 1906, son of David Franklin and Ethel Stevens DeTar. He attended University Place High School (Jackson High School) in Lincoln, and entered the US Naval Academy, Annapolis, Maryland, on appointment from the First Nebraska District in 1923. He was graduated and commissioned Ensign in the US Navy on June 2, 1927, and subsequently advanced in rank to that of Commander, to date from July 10, 1945. He was transferred to the Retired List on July 1, 1948, and advanced to Captain on the basis of combat awards.

After graduation from the Naval Academy in June 1927, he served for two years as a junior officer in the battleship Idaho. He then had submarine instruction at the US Submarine Base, New London, Connecticut, and after his detachment in December 1929, was assigned to USS S-11 and USS S-10, successively, while those submarines operated from Coco Solo, Canal Zone, during the periods 1930 to 1932. In June 1932 he was transferred to USS R-14, flagship of Submarine Division 4, based on New London, and following instruction at the Deep Sea Diving School and the Submarine Escape Training Tank, returned to the R-14, for duty on the Staff of the Commander, Submarine Division 4, and later as Navigator and Gunnery Officer of that submarine, during the period ending in April 1937.

He was next ordered to Honolulu, TH, where he took command of USS Widgeon, a submarine rescue vessel based there, in May 1937, and commanded her for two years. He returned to the United States and in June 1939 became Officer in Charge of the Deep Sea Diving School at the Navy Yard, Washington, DC. He was detached in August 1941 with orders to the Staff of Commander Submarine Squadron 4, and a few months later assumed command of USS Tuna. He was awarded the Navy Cross, with the following citation:

“For distinguished service in the line of his profession as Commanding Officer of USS Tuna in aggressive and successful action against the enemy during the period January 25, 1942 to Mach 19, 1942, while engaged on hazardous submarine patrol in enemy waters. Despite intensive enemy surface patrols, he sank one enemy freighter of about 6,000 tons, and damaged and probably sank one enemy destroyer and damaged two enemy ships of undetermined types of about 2,000 tons each, with injury or damage to material or personnel of his command.”

Detached from command of the Tuna on June 29, 1942, he reported to Manitowoc, Wisconsin, Shipbuilding and Dry Dock Company, as Special Assistant to the Supervisor, USN. After assisting in the conversion of the US Coast Guard Cutter Tamarack to a submarine rescue vessel, he commanded that vessel for two months. On January 8, 1943, he reported to the Newport News Shipbuilding and Drydock Company, Newport News, Virginia, to assist in fitting out USS Mobile, and served as her Damage Control Officer and First Lieutenant from her commissioning, March 24, 1943, until June 9 that year.

From June 10 until December 3, 1943, he had pre-commissioning duty at the New York Navy Yard, with USS Euryale (AS-22), and served as her Repair Officer from her commissioning until 1944, then as Executive Officer throughout the remaining war period and until February 28, 1946. He received a Letter of Commendation, with Ribbon, from the Commander in Chief, US Pacific Fleet, as follows:

“For excellent service in the line of his profession while serving on board USS Euryale as Repair Officer from June 1943 to July 1944, and subsequently as Executive Officer to September 1945. His outstanding ability, leadership and supervision of the personnel in his ship, were of valuable assistance to his Commanding Officer in maintaining the submarines in a high state of efficiency. His conduct throughout was an inspiration to his officers and men, and in keeping with the highest traditions of the US Naval Service.”

On Aptil 18, 1946, he reported to the Office of the Supervisor-Inspector of Naval Material, Philadelphia District, in Philadelphia, Pennsylvania. He served there until June 22, 1948, when he was relieved of all active duty, pending his retirement on July 1, 1948.