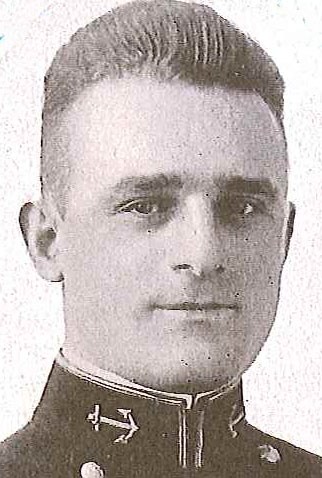 Peter Kalsch Fischler was born in Wellsboro, Pennsylvania, on September 10, 1895, the son of the late Peter Fischler and Mrs. (Lillie Stricklen) Fischler. He was graduated from Wellsboro High School in 1913, before his appointment to the US Naval Academy at Annapolis, Maryland, from the Fifteenth District of Pennsylvania in September 1914. Graduated and commissioned Ensign in June 1917, with the Class of 1918, he advanced progressively in grade to that grade to that of Rear Admiral to date from May 11, 1943.

After graduation from the Naval Academy in 1917, he joined USS Tacoma, operating with Atlantic Fleet during World War I. In December 1917 he reported for temporary duty in the Receiving Ship, Boston, Massachusetts, and in March 1918 was assigned duty in connection with fitting out the USS New Mexico. He served in the battleship from her commissioning on May 30, 1918, while she operated with the Atlantic Fleet during the First World War, and until October 1919. Thereafter until June 1922 he had consecutive duty in command of the destroyers Meredith, Breckenridge, Bell and Robinson. In September 1922 he assumed duty as Executive Officer and later command the USS Putnam until February 1924.

He was an Instructor in the Department of Seamanship at the Naval Academy until June 1926, and the following month returned to sea as Executive Officer of the USS Sacramento, on Asiatic Station. While aboard the Sacramento, that famous gunboat cruised off the Philippines and in China waters, assisted in protecting the foreign colony at Canton, China, during an uprising in December 1927, and remained on Asiatic duty until December 1928. She then sailed for Cavite, Philippines Islands, for duty with the Special Service Squadron, cruising off the Canal Zone and ports of Central America and the West Indies.

He reported in June 1929, as an Inspector in the Department Seamanship and Flight Tactics at the Naval Academy, where he served the two succeeding years. From June 1931 to March 1932 he was Navigator of the USS Nitro, and in May 1932, he reported for duty in connection with fitting out the USS Indianapolis. He served as her First Lieutenant and Damage Control Officer from her commissioning on November 15, 1932, until June 1934. The following two years, he served in the Planning Division, Bureau of Navigation, Navy Department, Washington, DC, and in July 1936 he assumed command of the USS Preble. Transferred, in the same capacity, to the USS Farragut, he served in that destroyer from May 1937 until June 1938.

Completing a course of instruction at the Naval War College, Newport, Rhode Islands, he reported in June 1939, as Inspector of Naval Reserves in Detroit, Michigan. He was assigned to the USS Wyoming as Executive Officer, in May 1940, and remained aboard that battleship until January 1941. He then joined the staff of Commander Train, Patrol Force (redesignated Commander Train, Atlantic Fleet, on January 17, 1941), as Operation Officer, serving as such until March 1942. Relieved of that staff duty, he transferred as Assistant Chief of Staff and Operations Officer on the staff of Commander Service Force, Atlantic Fleet. For his performance of duty in this assignment he received a letter of Commendation, with authorization to wear the Commendation Ribbon, from the Commander in Chief, US Atlantic Fleet, the citation, in part, as follows:

“…. During this period (January 1941 to August 1942) of intense activity in the Atlantic in which new bases were being completed and overseas movements were being ever increased, you displayed remarkable efficiency and foresight in planning logistic movements in order to continuously keep the supply ships, mine layers and tenders, transports and other units of the Service Force, employed in such a manner that the Fleets and bases never lacked for proper improved standard plans for amphibious operations during a period when for the first time, large forces of Army and Marine troops were being trained in those vital operations…”

In August 1942, he reported for duty on the staff of the Commander in Chief, US Fleet, serving in that assignment until February 1944. On February 8, 1944, he was assigned fitting out duty in the USS Alaska, and assumed command upon her commissioning on June 17, 1944. The Alaska, whose construction was begun ten days after the Japanese attack on Pearl Harbor, Territory of Hawaii, was the first three super 30,000 ton cruisers to join the Fleet and was the American version of the German pocket battleship. While under his command she operated on routine qualification training, before he was relieved of command shortly before she left Pearl Harbor for the forward area in February 1945.

In January 1945 he was assigned duty as Commanding Battleship Division Five. “For heroic service… as Commanding of a Fire Support Unit, from February 16 to March 7, 1945, during the assault and capture of Iwo Jima…” he was awarded the Bronze Star Medal, with Combat Distinguishing Device “V”. The citation follows in part: “… Although endangered by well concealed enemy shore batteries, he bravely and skillfully maneuvered the ships under command, and by excellent shore bombardment, succeeded in destroying numerous shore installations. During the assault phase, his ships provided effective call fire in support of the assault forces ashore, rendering great assistance in the successful advances of our forces…”

He was also awarded the Legion of Merit, with Combat “V,” “For exceptionally meritorious conduct… as Commander of a Battleship Division, a Task Group and a Fire Support Unit, in action against enemy Japanese forces on Okinawa, Ryukyu Islands, from March through May 1945. Maintaining the men and ships of his command at the highest peak of efficiency, (he) skillfully directed the delivery of effective gunfire upon vital enemy emplacements throughout prolonged and hazardous naval operations… (He) contributed materially to the success of the Okinawa landing operations, and his unwavering devotion to the fulfillment of an important mission was in keeping with the highest traditions of the United States Naval Service.”

In June 1945, he reported for duty as Assistant Chief of Staff for Logistics on the staff of the Commander in Chief, US Pacific Fleet. He received a Second Letter of Commendation, from the Commander in Chief, Pacific Fleet, with authorization to wear the bronze star on his Commendation Ribbon. The citation states in part: “… As Assistant Chief of Staff for Logistics he planned and directed the logistical support of United States Forces operating in the Pacific during and subsequent to the final advances against the Japanese Empire…”

In February 1946, he was assigned duty in the Office of the Chief of Naval Operations, Navy Department, Washington, DC, and in May 1946 reported as Deputy Commander Nineteenth Fleet, redesignated in January 1947, Deputy Commander, Pacific Reserve Fleet. On July 3, 1947 he was ordered to duty as Commander, Training Command, Amphibious Forces. In March 1948 he assumed command of Amphibious Group One, Pacific Fleet with additional duty as Commander Transport Squadron One. Relieved of that assignment he assumed command on January 3, 1950, of Amphibious Force, Pacific Fleet.