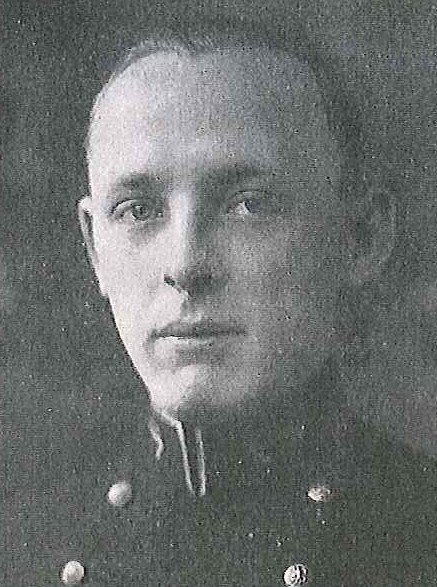 Captain Banks, a native of Mississippi, was born July 27, 1900 at Bent Oaks, Columbus. After attendance at the Steven D. Lee High School and Franklin Academy in his home town, and the Tennessee Military Academy, Annapolis, Maryland, with the class of 1925. Upon graduation on June 4, 1925, he was commissioned Ensign and his progressed through the various grades until named Captain for temporary service on November 10, 1945. His selection to the permanent rank of Captain was confirmed by the Senate to date from April 21, 1949.

Upon leaving the Academy, Captain Banks was assigned duty in the USS Detroit serving from July 1925 to December 1928 in that cruiser in the gunnery department, the engineering department and as Assistant Navigation Officer. Following this duty at sea, he reported for duty in the navy Department, Bureau of Navigation, Fleet Training Section, where he served until February 1931.

From June 1931 to May 1933, Captain Banks had postgraduate study in engineering technical at the Postgraduate School, Annapolis, at the Naval Boiler Laboratory, Philadelphia, Pennsylvania, and at the University of California, where he received his Master’s Degree in Engine Design. He returned to sea duty in May 1933 aboard the Minelayer Ramsey, as Engineer Officer, and before completing this duty in 1935, his ship had been awarded the pennant for engineering excellence in Fleet competition. From July 1934 to May 1936, he served on the staff of Commander, Minecraft, Pacific Fleet, as Material Officer.

From June 1936 to December 1938, Captain Banks served as refractory test officer and later as boiler test officer at the Naval Boiler Laboratory, Navy Yard, Philadelphia, Pennsylvania, and then proceeded to Newport News, Virginia, under orders to assist with fitting out the USS Saint Louis, light cruiser, and when she was commissioned on May 19, 1939, he assumed duty as Assistant Engineer Officer. In June 1940 he had orders in connection with fitting out the USS Prairie, destroyer tender, and when she was commissioning in August of that year, he went aboard as Engineer Officer. He was so serving during a fire-fighting operations in Argentina. Newfoundland, in the spring of 1942, and received a special commendation for his services in this emergency.

In October 1942, Captain Banks was transferred to Quincy, Massachusetts, where the heavy cruiser Baltimore was fitting out, and upon her commissioning on April 15, 1943, he assumed duty as Engineer Officer. The USS Baltimore then reported to the Commander in Chief, Pacific Fleet after a brief training period, and made an interesting war record participating in operations in support of various Carrier Task Groups in action against the Marshall Island, the Gilberts, Truk, Hollandia, Marianas, Wake, and Marcus Islands. The USS Baltimore repelled all attacks from the enemy and lost not a single man as a casualty.

Upon detachment from the Baltimore, Captain Banks was assigned as Shop Superintendent, US Naval Shipyard, Portsmouth, Virginia, between June 1944 and October 1945, when he returned to sea duty in command of the USS Bland. This period was interspersed with short periods for study at the Combat Information Center, Boston, Massachusetts, and as a student of Damage Control in Philadelphia, Pennsylvania, and Loran Devices, Treasure Island, California, until May 1946, when he assumed command of the USS Tappahannock, operating with Commander Service Force, Pacific Fleet. In this command he took his vessel through the Suez and Red five times in two months, and then around the world.

Captain Banks is a grandson of Colonel James C. Banks of the Confederate Army, who participated in the Vicksburg, Mississippi, Campaign..