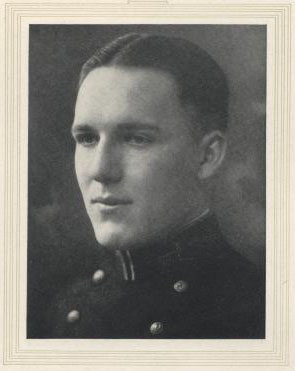 James Victor Query was born in Harrisburg, North Carolina on 30 October 1903, son of Jay V. and Lola J. (Morrison) Query. He attended Charlotte, North Carolina, High School before entering the US Naval Academy, Annapolis, Maryland, from his native state in 1921. Graduated and commissioned Ensign on 4 June 1925, he subsequently advanced in rank to that of Captain, to date from 20 July 1943.

Upon graduation from the Naval Academy in 1925, he was assigned to the USS New York, and served as a junior officer in that battleship, Flagship of Battleship Division 2, Scouting Fleet, until the summer of 1926. He then transferred to the USS Dallas, Squadron Leader, Squadron 9, Scouting Fleet, and served aboard for four years, the last year as her Engineering Officer. Reporting for instruction at the Submarine Base, New London, Connecticut, he qualified in submarines, and in 1931 was ordered to the Sixteenth Naval District, Cavite, Philippine Islands, where he had successive duty in the submarines S-30, and S-31, operating with Submarine Division 10, Asiatic Fleet.

Returning to Annapolis in 1933, he had postgraduate instruction in Applied Communication and General Line at the Postgraduate School. In July 1935 he reported for duty aboard the USS Tarpon, first operating under the Chief of Naval Operations, and later as a unit of Submarine Division 3, Submarine Force, and served as her Executive Officer and Navigator from 1937 to 1939. He was on duty at the Submarine Base, Pearl Harbor during a two year period ending July 1941.

Ordered in December 1946 to Headquarters, Sixth Naval District Naval Base, Charleston, South Carolina, he served first as Senior Member of the Submarine Board of Inspection and Survey for that District, and on 30 June 1947 was designated Assistant Chief of Staff (Personnel) on the Staff of Commandant, Sixth Naval District. On 2 March 1949 he was ordered to duty as Commanding Officer of the USS General William Mitchell (AP 114). On 25 January 1950 he was ordered relieved of that command and back to the Sixth Naval District for duty as a Member of the Physical Evaluation Board. He retired from the service in May 1953. Captain Query died in Baltimore, Maryland 4 December 1975.