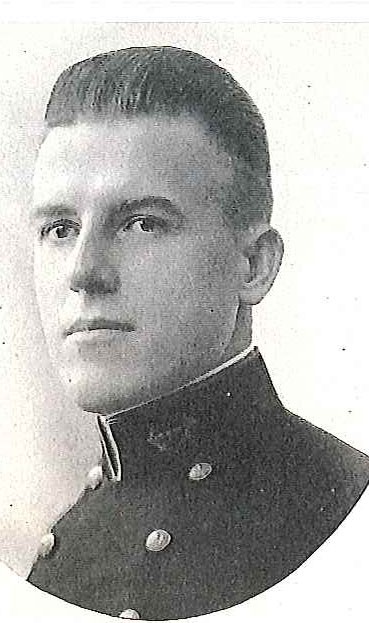 Melville Edwin Eaton was born in Chicago, Illinois, on September 24, 1897, son of John Franklin and Anna Georgia (Kendig) Eaton. He attended Howe-Austin High School and Crane Junior College in Chicago, and was  appointed to the US Naval Academy, Annapolis, Maryland, from the Seventh District of Illinois in June 1917. As a Midshipman he had World War I service during the summer of 1918 in USS Missouri, operating with the Atlantic Fleet. Graduated and commissioned Ensign on June 3, 1921, he subsequently advanced to the rank of Captain, to date from June 21, 1942.

Following graduation from the Naval Academy, he was assigned to USS California, then building at the Navy Yard, Mare Island, California. After her commissioning on August 10 of that year, he cruised in her in Pacific Waters until June 1923. Upon her arrival at the Puget Sound, Washington, that month, he was detached to assist in fitting out USS Cincinnati the Todd Dry Dock and Construction Company, Tacoma, Washington. He served in that light cruiser from her commissioning, January 1, 1924, until August of that year.

He had instruction in Aviation at the Naval Air Station, Pensacola, Florida, and from February to May 1925 served briefly in USS Memphis, USS Parrott and USS Reina Mercedes. He then took passage from San Francisco to Honolulu, TH., where he joined USS Beaver on May 29, 1925. Detached from that submarine tender, he reported on January 1, 1926, to USS Helena in which he served until December 1927. For a month thereafter he commanded USS General Alava, and in April 1928 returned to the United States.

From April 12, 1928 to June 18, 1929, he had successive duty at the Naval Observatory, Washington, DC; the Naval Air Station, Pensacola, Florida; and at Headquarters, Eighth Naval District, New Orleans, Louisiana. He then returned to Annapolis for instruction in Mechanical Engineering at the Postgraduate School, and continued the course at various places until September 1931. On October 17, 1931 he joined USS Trever, fast minesweeper, as Engineer Officer, and from May 1933 to June 1935 served as her Executive Officer.

A tour of duty at the Navy Yard, Mare Island, California, preceded duty from April 1937 to June 1940 as Engineer Officer of USS Portland. After his detachment he had duty until March 1941 in the Bureau of Ships, Navy Department, Washington, DC, after which he served for eight months' [sic] as Navigator of USS California flagship of Commander Battle Force, Pacific Fleet. Detached on November 29, 1941, he reported on December 25, soon after the United States entered World War II, to USS George F. Elliott, and served as her Executive Officer until that cargo vessel was sunk during the initial landings at Guadalcanal.

In August 1942 he was assigned to USS Fuller, another attack transport, which he commanded from February 20, 1943 throughout that year. For exceptionally meritorious service during the landing at Empress Augusta Bay, Bougainville, on November 8, 1943 he was awarded the Legion of Merit with Combat "V." The citation states in part:

"…..Displaying superb seamanship, Captain Eaton maneuvered the Fuller, loaded with troops, supplied and equipment for the occupation force, through hazardous waters and unknown shoals toward the assigned unloading anchorage. Although the vessel was attacked by enemy dive bombers and seriously damaged, (his) gallant command successfully repelled the hostile planes, fought fires, effected emergency repairs and completed unloading in record time. His brilliant seamanship and calm courage in the face of grave damage were major factors in the successful conclusion of an extremely perilous mission."

Reporting in February 1944 to Headquarters, Twelfth Naval District San Francisco, he was transferred two months later to the Fleet Operational Training Command, Pacific, at San Diego. Shortly thereafter he proceeded to the Subordinate Command, Seattle, Washington, and there on May 2, 1944, he assumed command of the Attack Transport Pro-commissioning School. While in that command, until April 1945, he had additional duty in connection with Administration and Maintenance. For meritorious service in that assignment from July 1 to December 31, 1944, he received a Letter of Commendation from Commander in Chief, Pacific Fleet.

He returned to the Bureau of Ships to serve from April 1945 to September 1946, and on October 15, 1946 assumed command of USS President Adams (APA 19). A year later he was relieved for duty as General Inspector, Gulf Sea Frontier, and on July 26, 1948 was redesignated  General Inspector, Eighth Naval District, New Orleans, Louisiana. On June 10, 1949 he became Commanding Officer of the Naval School (Naval Academy and College Preparatory), Bainbridge, Maryland, where he remained until the transfer of that school and its functions to the Naval Training Center, Newport, Rhode Island.