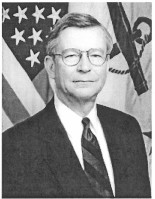 The Honorable Robert B. Pirie, Jr., had been asked by the Bush Administration to serve as Acting Secretary of the Navy until the nomination and confirmation of an appointee by Mr. Bush. Mr. Pirie was confirmed by the U.S. Senate as Under Secretary of the Navy on 12 October 2000. He has over 30 years experience in defense-related work in the armed forces, the civil service and in industry.

A Naval Academy graduate in the class of 1955, he was also a Rhodes Scholar, and attended Oxford University from 1956 to 1959. He served 20 years as a naval officer, culminating his service with three years in command of a nuclear attack submarine.

After leaving government service he held a variety of positions in the private sector, including that of president of Essex Corporation and vice president of the Center for Naval Analyses and vice president of the Institute for Defense Analyses. He directed the CNO Strategic Studies Group from 1989 to 1992. He previously held the position as Assistant Secretary of the Navy (Installations and Environment) from March of 1994 to October 2000, and Under Secretary of the Navy from 12 October 2000 to 20 January 2001.