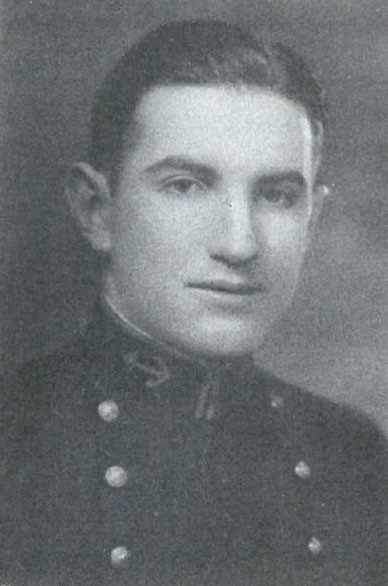 Norwood Axtell Campbell, son of Mr .and Mrs .L.A. (Maude Axtell) Campbell, was born in Bloomington, Indiana, June 29, 1907.  He was appointed to the US Naval Academy in 1926 from his native state.   He participated in athletics, his special interest being lacrosse and basketball, graduated and was commissioned Ensign June 5, 1930. His advancement in rank was as follows: Lieutenant (junior grade) June 5, 1933; Lieutenant June 30, 1938; Lieutenant Commander June 15, 1942; Commander to rank from December 30, 1941; and Captain (temporary) May 2, 1946.

During the summer of 1930, he was attached to the Naval Air Station, San Diego, California for the course in flight training.  He reported to USS Nevada in October, 1930, and after two years  he was designated Main Battery Spotter, and served in that battleship until March, 1934. He then reported to Naval Air Station, Pensacola, Florida, for flight training, and when designated Naval Aviator on February 27, 1935, he was assigned duty with Fighting Squadron SIX based on USS Saratoga, and reported for that duty the following April. He transferred in July, 1937 to USS Minneapolis, and served as a member of Observation Squadron SIX for one year.

Assigned shore duty at Naval Air Station, Pensacola, he reported in August, 1938, and served until July, 1940. He then was ordered to USS Yorktown for duty as Landing Signal Officer, and served until that carrier was sunk by an enemy torpedo following the Battle of Midway , June 6, 1942. During this period the Yorktown participated in the North Atlantic Patrol, May to December, 1941, and in cooperation with the Enterprise fought the first Naval offensive against the Japanese in the Marshalls and Gilberts in February, 1942; patrol of the Coral Sea, February to May, followed by action at Tulagi, Solomon Islands, and the Battle of Coral Sea, early in May, 1942. He received a Letter of Commendation with Ribbon from·the Commander in Chief, Pacific Fleet, for his work as Landing Signal Officer during day and night actions. He also received the Presidential Unit Citation awarded the Enterprise and squadrons participating in these engagements.

After the loss of the Yorktown, he returned to Pearl Harbor with survivors, and was assigned as Commanding Officer of Scouting Squadron SIX, then being reformed at Naval Air Station, Kaneohe, TH. Embarked in October, 1942 on the USS Saratoga with Air Group THREE, which operated in the Coral Sea, patrolling south of Guadalcanal, he was awarded the Distinguished Flying Cross. The citation stated in part: "For heroism and extraordinary achievement . . in action against enemy Japanose forces in the Solomon Islands from February 19 to March 11, 1943. In the face of desperate enemy opposition (he) directed his squadron . . with unwavering determination. . . Through his exceptional initiative and utter disregard for his own safety he contributed greatly to the success of the squadron in imposing on the enemy extremely heavy damage and severe personnel losses..."

In March he became Commanding Officer of Air Group THREE, still based on the Saratoga, and operated in company with HMS Victorious.  In September following , he was named Operations and Plans Officer on the staff of Commander Fleet Air, West Coast , at San Diego. He received a second Letter of Commendation with ribbon from the Commander in Chief, Pacific Fleet for his services in that command. When, in April, 1945, he was detached from that duty, he reported to the Newport News Shipbuilding and Dry Dock Company, Newport News, Virginia, where the aircraft carrier Franklin D. Roosevelt was fitting out, and upon her commissioning, October 27, 1945, he went aboard as her Executive Officer, and served until May, 1946.

For one year from June, 1946 he served as Commanding Officer, Tactical Air Control  SquadronTWO Amphibious Force, Atlantic Fleet and as Commander Carrier Aircraft Service Unit 2, and in June, 1947 he reported to the Navy Department, for duty as Aviation Detail Officer under the Deputy Chief of Naval Operations for Air. When detached  from that duty he attended the Air War College, Maxwell Air Force Base Alabama, until ordered in February, 1950 as Commanding Officer of Air Transport Squadron ONE, his present duty.