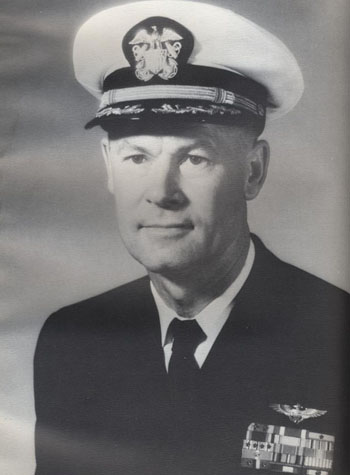 Kent Liston Lee is the son of R. Irby and Hettie (Floyd) Lee. He enlisted in the US Navy on 15 August 1940, and became an Aviation Cadet (V-5) on 12 November 1942, entering the flight training program on that date. Completing flight training at the Naval Air Station, Corpus Christi, Texas, he was designated Naval Aviator and commissioned Ensign, USNR on 7 August 1943. He was promoted to Lieutenant (junior grade) to date from 1 November 1944, and on 8 July 1946 was appointed in that rank in the US Navy. He subsequently advanced in rank to that of Vice Admiral, to date from 29 January 1972.

After receiving his "Wings" in 1943, he had duty at the Naval Air Station, Jacksonville, Florida, and the Naval Auxiliary Air Station, Cecil Field, Florida until March 1944. He then joined Bombing Squadron ONE HUNDRED and in June 1944 transferred to Bombing Squadron FIFTEEN, operating off the USS Essex. He was awarded the Air Medal for participating in numerous strikes against enemy positions and shipping at Marcus and Wake in the Marianas, the Bonins, Palau and Philippine Islands during the period 19 May to 24 September 1944 and a Gold Star in lieu of the Second Air Medal for destroying an enemy plane in the vicinity of Formosa on 12 October 1944. He is also entitled to the Ribbon for and a facsimile of the Presidential Unit Citation awarded the USS Essex.

In May 1950 he reported for duty on the Staff of Commander Carrier Division FIFTEEN, and "for meritorious service as Flag Lieutenant and Aide...during operations against the enemy in the Korean Theater from August 3, 1950 to January 15, 1951..." was awarded the Navy Commendation Medal. In February 1951 he transferred to the Staff of Commander Carrier Division SEVENTEEN. Assigned in May 1951 to Attack Squadron ONE HUNDRED FIFTEEN, based on board the USS Philippine Sea, he was awarded a Gold Star in lieu of the Third Air Medal for completing twenty missions against enemy aggressor forces in the Korean area of hostilities during the period 8 February to 2 June 1952. He is also entitled to the Ribbon with Bronze Star for the Navy Unit Commendations awarded the USS Badoeng Strait (CVE-116) and the USS Sicily (CVE-118).

Detached from Attack Squadron ONE HUNDRED FIFTEEN in June 1952, he was a student (for two months) at the Naval Schools Command, Treasure Island, San Francisco, California, then continued his studies at the US Naval Postgraduate School, Monterey, California, from which he received the degree of Master of Science in Physics in June 1954. Duty with Air Development Squadron THREE until April 1956 was followed by an assignment as Head, Weapons Section, Fleet Training Center, Norfolk, Virginia. In May 1958 he assumed command of Attack Squadron FORTY SIX, and in September 1959 became Technical Aide Nuclear Physics, Power Branch, Material Sciences Division, Office of Naval Research, Navy Department, Washington, DC.

During the period November 1960 until March 1962 he served as Operational Planner, Single Integrated Operational Plan Division, Joint Strategic Target Planning Staff, Offutt Air Force Base, Nebraska. After a brief tour of duty on the Staff of Commander Carrier Air Group FOUR, he assumed command of Carrier Air Group SIX in June 1962, embarked in USS Enterprise (CVA9N)65). In 1962, he ejected from an A4D Skyhawk while participating in operations during the Cuban quarantine. From March 1963 until March 1964 he had instruction in Nuclear Propulsion at the Atomic Energy Commission, Washington, DC. He next commanded the USS Alamo (LSD-33) and in May 1965 reported as Executive Assistant and Naval Aide to the Assistant Secretary of the Navy (Research and Development).

In July 1967 he assumed command of the USS Enterprise (CVA(N)65) and from 3 January to 26 June 1968 also served as Commander task Unit SEVENTY-SEVEN Point ONE. He was awarded the Legion of Merit for the "...detailed planning and execution of extensive and sustained combat air strikes against extremely hostile and heavily defended areas in North Vietnam..." He is entitled to a facsimile of the Navy Unit Commendation awarded the USS Enterprise and is entitled to a second star on his Navy Unit Commendation Ribbon.

In August 1969 he was assigned to the Bureau of Naval Personnel, Navy Department and in November of that year reported as Assistant Commander for Logistics and Fleet Support, Naval Air Systems Command, Washington, DC. He became Director of the Office of Program Appraisal, Navy Department in August 1970 and in January 1972 assumed duty as Deputy Director of the Joint Strategic Target Planning Staff, Offutt Air Force Base, Nebraska. "For exceptionally meritorious conduct..." in that assignment, he was awarded a Gold Star in lieu of the Second Legion of Merit. The citation continues in part:

"...Responsible for exercising direct supervision over the activities of the Joint Strategic Target Planning Staff, Vice Admiral Lee was highly influential in the formulation of policy and in giving direction to policies established by the Joint Chiefs of Staff (JCS) and the Director, Strategic Planning, leading to and governing the development and maintenance of the JCS Single Integrated Operational Plan and the Coordinated Reconnaissance Plan..."

He is married to the former Mary Edith Buckley of Piedmont, California and they have three daughters. He retired from the service on 31 October 1976.