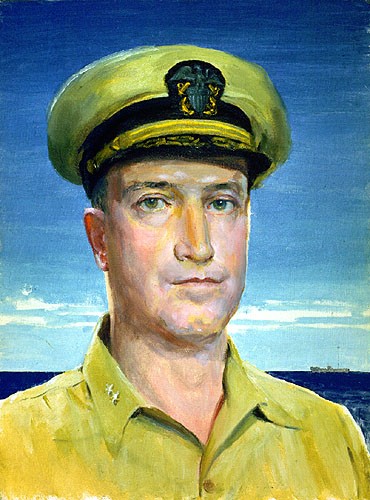 Rear Admiral Parsons, born in Chicago, Illinois, 26 November 1901, attended Fort Sumner, New Mexico, High School, before his appointment to the US Naval Academy from New Mexico in 1918.  Graduated and commissioned Ensign in June 1922, he subsequently progressed in grade until his promotion to Rear Admiral on 8 January 1946.

After graduation in 1922, Rear Admiral Parsons served in USS Idaho for five years, with duty in connection with gunnery and fire control. In May 1930 he completed instruction in ordnance engineering at the Postgraduate School, Annapolis, Maryland, and at the Navy Yard, Washington, DC. From June 1930 until May 1933 he served in the battleship Texas, again with fire control and gunnery duty. He served in the Bureau of Ordnance, Navy Department, Washington, DC, from July 1933 until May 1934, acting as liaison officer for the Bureau at the Naval Research Laboratory, Anacostia, DC.

From June 1934 until June 1936, Rear Admiral Parsons was an instructor in ordnance at the Postgraduate School, Annapolis, Maryland. Returning to sea, he served as executive officer of USS Aylwin from June 1936 until March 1938 when he was transferred to duty as gunnery officer on the staff of Rear Admiral William R. Sexton, USN, Commander, Destroyers, Battle Force, of which USS Detroit was flagship, serving in that assignment until June 1939. From August of that year until May 1943 he was Experimental officer, Naval Proving Ground, Dahlgren, Virginia. From April 1942 until May 1943 he performed additional duty as Special Assistant to Dr. Vannevar Bush in connection with the development of the radio proximity fuze. This additional duty extended to the South Pacific where from December 1942 to March 1945 he assisted in the introduction of the fuze in the Fleet, and witnessed its initial battle use form USS Helena in January 1943.

On 15 June 1943, Rear Admiral Parsons reported for duty in the Manhattan Engineer District, US Engineer Project “Y”, Santa Fe, New Mexico. On that assignment he served as ordnance division leader and associate director, and finally as officer-in-charge of the overseas technical group of the Los Alamos Scientific Laboratory, which developed the atomic bomb. After witnessing the atomic bomb test in New Mexico in July 1945, he returned to the Marianas and was weaponeer and bomb commander in the bomber which dropped the first atomic bomb used in warfare on the City of Hiroshima. For those services he was awarded the Distinguished Service Medal with the following citation:

Distinguished Service Medal:
“For exceptionally meritorious service to the Government of the United States in a duty of great responsibility since May 1943, in connection with the development of the atomic bomb. Working with tireless energy, courage, and foresight, Commodore (then Captain) Parsons applied himself to the tremendous task of transforming the theory of atomic fission into an effective weapon of war capable of being manufactured by American production methods at a time when the task appeared all but impossible. He applied his specialized knowledge in personally directing much of the design and development of the many components of the atomic bomb and in formulating and coordinating the plans for disseminating the manufacture of these components. In addition, he also organized much of the procedure required in assembling the components into an effective weapon under conditions of utmost secrecy. He devoted himself fully to these tasks from May 1943, to the initial atomic bomb attack on Hiroshima in which he took part. Commodore Parson’s organizational ability, brilliant professional skill and devotion to duty throughout the development and manufacture of the atomic bomb were outstanding and in keeping with the highest traditions of the United States Naval Service.”

For his services as Senior Military Technical Observer on the B-29 plane which dropped the atomic bomb on Hiroshima, Rear Admiral (then Captain) Parsons was awarded the Army Silver Star Medal, with the following citation:

Silver Star Medal--Army:
“For gallantry in action while participating in aerial flight against the Japanese Empire. Captain Parsons was Senior Military Technical Observer on a B-29 aircraft which flew from a base in the Marianas islands 6 August 1945 to drop on the city of Hiroshima, Japan, the first atomic bomb to be used in warfare. After takeoff in the very early morning hours, the plane set course as planned. Captain Parsons then climbed into the bomb bay. As the airplane approached Japan the risks grew greater, for the element of hazard from the unknown was ever present, since this was the first time this bomb, much more destructive than any in existence, had been released from an airplane. The possibilities of damage from anti-aircraft fire, enemy fighters, and unforeseen failures added to the risk; nor was it certain what effect the detonation would have upon the bomber and its occupants. Accompanying the mission to insure the bomb’s correct use, Captain Parsons kept careful watch until the plane was in its briefed position, and then approved release. At 0915 the switch was pressed, the comb cleared safely, and fell towards its planned objective. They then departed with speed from the target area, travelling a safe distance before the blast occurred. By his high degree of skill in directing work with the atomic bomb, and great personal risk in placing the final components in the bomb during flight, Captain Parsons distinguished himself, reflecting the highest credit on himself and the United States Navy.”

In November 1945, Rear Admiral Parsons was assigned duty in the Office of the Deputy Chief of Naval Operations (Special Weapons) as Assistant Chief of Naval Operations (Special Weapons). In January 1946, Rear Admiral Parsons was assigned to additional duty as Deputy Commander for Technical Direction, and Commander Task Group 1.1, of Joint Army Navy Task Force One, the task force formed by the direction of the Joint Chiefs of Staff and with the approval of the President, to conduct atomic bomb tests against naval vessels in order to gain information of value to the national defense. Tests Able and Baker, known as “Operations Crossroads” were held on schedule in Bikini lagoon, Marshall Islands, in July 1946.

In accordance with the disestablishment of the Office of the Deputy Chief of Naval Operation (Special Weapons), and Task Force One, in November 1946, Rear Admiral Parsons was assigned duty as Director of Atomic Defense in the Office of Deputy Chief of Naval Operation (Operations). He was responsible for the initiation and coordination of naval action required to implement decisions and policies with respect to atomic matters.

On 2 February 1951 he reported as Commander Cruiser Division SIX, and in March 1952 was detached for duty as Deputy and Assistant Chief of the Bureau of Ordnance, Navy Department. He died suddenly on 5 December 1953 at the Naval Hospital, Bethesda, Maryland.