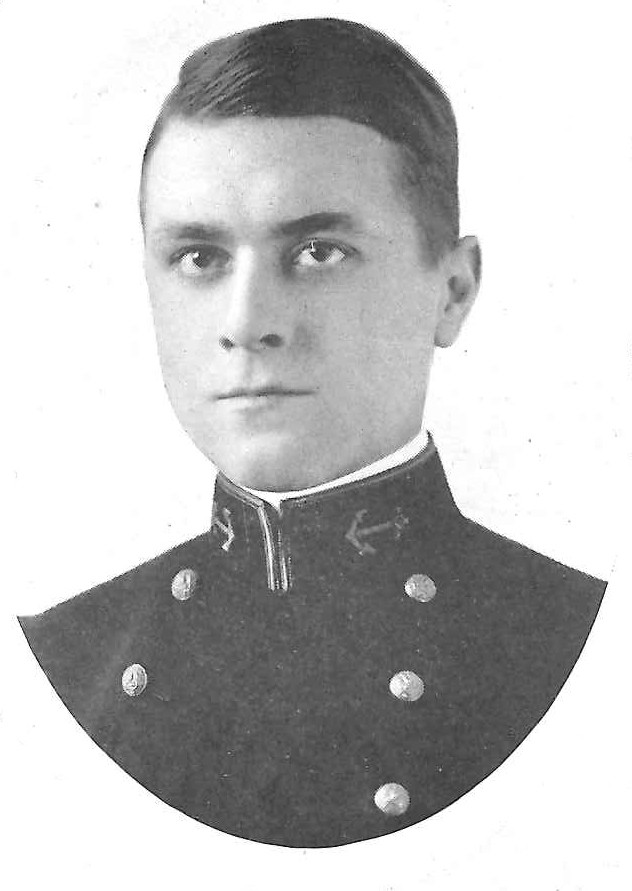 Melvin Hughes Bassett was born in Convington, Virginia, on June 12, 1899, the son of Frank Peck Bassett and Mrs. Marion Hughes Bassett, both deceased.  He attended Bellefonte Academy, Bellefond, Pennsylvania, before his appointment to the United States Naval Academy in 1916.  He served during the summer of 1917 and 1918 as a midshipman aboard vessels of the Atlantic Fleet, engaged in the training of Armed Guard crews.  Graduated with the Class of 1920 on June 6, 1919, he was commissioned Ensign, and subsequently progressed in grade until his promotion in 1944 to Captain, to rank from July 1, 1943.  He was transferred to the Retired List of the Navy on December 1, 1950 and was advanced to Rear Admiral on the basis of combat awards.

Following graduation from the Naval Academy in 1919, he was ordered to duty at sea, serving consecutively in the USS Artemis; the USS Pennsylvania, flagship of the US Fleet; the USS South Carolina; the USS Hannibal; and the USS Trenton.  Service ashore as Recruiting Officer at Cleveland, Ohio, in 1926-1928, was followed by eighteen months duty aboard the USS Cleveland of the Special Service Squadron, participating in operations in Nicaragua, and another eighteen months in the USS Marblehead, operating with Light Cruiser Division 3, Scouting Fleet.

The year June, 1931-1932, he had instruction at the Naval War College, Newport, Rhode Island, and upon completion of the Junior Course, he was ordered to duty as Commanding Officer of the USS Eagle 48, training ship of the Third Naval District, in connection with training Naval Reserves.  In the summer of 1934 he was assigned as Executive Officer of the USS Boggs, which was designated as a radio-controlled high-speed target ship.  He later became Commanding Officer of the Boggs, serving three years until June, 1937.  He then served two years as Instructor of Naval Reserves, Detroit, Michigan, in the Ninth Naval District.

In September, 1939 he assumed duties as Gunnery Officer of the USS Langley, and after serving two years in that aircraft carrier, he was transferred to the Asiatic Fleet.  He was serving as Executive Officer of the USS Trinity, an auxiliary oiler operating in Manila Bay when the Japanese attacked Pearl Harbor on December 7, 1941.  The Trinity remained with the Asiatic Fleet until the local fuel supplies were exhausted and then made regular runs from Freemantle, Australia to Abadan, Iran for fuel.

Detached from the Trinity in August, 1942, he returned to the United States aboard the USS Otus.  After fitting out the Atascosa, he assumed command of that auxiliary oiler upon her commissioning in October, 1942.  He served successively under Commander, Service Force, Atlantic, and Commander, Service Force, Pacific, until June, 1943.  Following two months on temporary duty as Chief of Staff to Commander Northern Transport Group, in the occupation of the Aleutian Islands, he reported for duty as Executive Officer of the Submarine-chaser Training Center, Roosevelt Base, San Pedro, California, serving from September, 1943 to October, 1944.

He departed the United States in December, 1944, and after a six weeks period of special duty under Commander Service Force, Pacific, he was assigned as Assistant Chief of Staff (Operations) on the staff of the Island Commander, Peleliu.  He was awarded the Bronze Star Medal with combat distinguishing device, V, and cited for “meritorious service as Operations Officer on the staff of the Island Commander, Peleliu, Palau Islands, from January 30 to September 2, 1945.  Exercising initiative and sound judgment in administering his office, (he) contributed materially to the coordination of all air, sea and ground units in defense of the Southern Palau Islands, thus enabling this area to withstand attacks by a numerically superior enemy…”

From March to August, 1946 he served as Chief of Staff to Atoll Commander, Kwajalein, during the joint Army-Navy atom bomb tests (Operation Crossroads).  On September 9, 1946 he assumed duty as Commanding Officer, US Naval Barracks, Washington, DC.  In July, 1949 he had orders transferring him to duty at sea on the staff of Commander Destroyers, Atlantic.  He was so serving when relieved of active duty pending his transfer to the Retired List of the Navy, December 1, 1950.