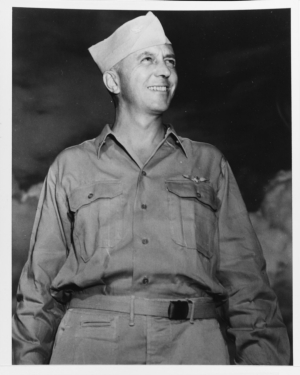 Aurelius Bartlett Vosseller was born in Jacksonville, Illinois, on 25 January 1903, son of James Oliver and Hattie (Bartlett) Vosseller. He attended public schools of Jacksonville, Whipple Academy and Illinois College there, before entering the US Naval Academy, Annapolis, Maryland, from his native state in 1920 on appointment of the Honorable M. McCormick, Senator from Illinois. As Midshipman, he was a member of Class boxing and lacrosse teams, the Class Crest Committee, and was Assistant Editor of “The Log.” Graduated and commissioned Ensign on 4 June 1924, he subsequently attained the rank of Rear Admiral to date from 1 November 1951. On 1 September 1956 he was transferred to the Retired List of the US Navy and was advanced to the rank of Vice Admiral on the basis of combat awards.

After graduation in June 1924, he had sea duty for six years, serving consecutively in USS Mississippi, operating with Battleship Division 4, Battle Fleet; as Assistant Communication Officer on the staff of Commander, Battleships; as Gunnery and Torpedo Officer of USS Reno; and on the staff of Commander Destroyers, Battle Force (USS Omaha), as Assistant Gunnery Officer. In May 1930 he returned to the United States for flight instruction at the Naval Air Station, Pensacola, Florida, being designated Naval Aviator on 2 March 1931. Shortly thereafter he was assigned to Carrier Division 2, US Fleet (USS Saratoga), and later joined Fighting Squadron 5, based on USS Lexington.

Early in 1932 he had temporary duty with Aircraft, Scouting Force, aboard USS Wright, and in June of that year returned to Annapolis for instruction in Aeronautical Engineering at the Post-graduate School. Continuing instruction at various places including the Naval Air Station, San Diego, California, and the California Institute of Technology, Pasadena, he received the degree of Master of Science from the latter in 1934.

He next had successive service with Fleet Air Detachment in Observation Squadron 2, attached to the battleship Arizona; aboard the aircraft carrier Ranger; and with Fighting Squadron 2 based on USS Lexington. He reported on 21 June 1937 to the Bureau of Aeronautics, Navy Department, Washington, DC, and until 8 July 1940 had duty in the Plans Division of that Bureau. For services during that period in the development of an oxygen mask for aircraft use in high altitude work, he received a Letter of Commendation from the Secretary of the Navy.

Duty with Patrol Wing 5 from August 1940 until August 1941 preceded command of Patrol Squadron 55, later redesignated Patrol Squadron 74, until 19 February 1942. For Services in that assignment he was awarded the Bronze Star Medal with Combat “V” and the Air Medal. The citations follow in part:

Bronze Star Medal: “For meritorious service as Commander of an Air Squadron during operations in the Atlantic Area from August 1941 to January 1942. Undaunted by hazardous weather conditions while leading his squadron from Argentia to Iceland in August 1941, (he) skillfully completed the pioneer mission despite meager and inaccurate weather information and the lack of air navigational aids…carried out reconnaissance flights against enemy submarines and escorted convoys until January 1942, and in addition, enabled the planning for and construction of a vitally needed Naval Air Station in Iceland…”

Air Medal: “For meritorious achievement in aerial flight as Pilot of a Naval Aircraft in operations against enemy forces in the North Atlantic War Area during the winter of 1941 and 1942. Completing numerous anti-submarine and convoy coverage flights in the face of constant hazards of ice, low visibility, blizzards and high winds (he) contributed materially to the success of his squadron in providing protection to valuable convoys traversing that area…”

From February to December 1942 he served with the Anti-Submarine Warfare Unit, Atlantic Fleet. He then had fitting out duty in USS Bunker Hill, then building at the Bethlehem Steel Company’s Shipbuilding Division at Quincy, Massachusetts. Before the commissioning of that carrier in May 1943, he was ordered to organize and establish the Aircraft Submarine Warfare Development Detachment, Quonset Point, Rhode Island, and retained command of that unit until April 1944. For outstanding service in that command, he was awarded the Legion of Merit. The citation states in part:

“For exceptionally meritorious conduct…as Commander Antisubmarine Development Detachment from the early part of April 1943, until late March 1944…Captain Vosseller was directly responsible for the evolution of effective technique and tactics employed by aircraft in combat against enemy U-boats, the development of new methods of training and the use of new projectiles and detention devices, countermeasures against new German torpedoes and many other weapons and methods…”

He assumed command of USS Bogue (CVE 9) in April 1944, and served as her Commanding Officer until relieved to join the staff of Commander Fifth Fleet, in November of that year. He was awarded a Gold Star in lieu of the Second Legion of Merit with Combat “V”, for “exceptionally meritorious conduct…as Commander of an Anti-Submarine Task Group, Atlantic Fleet, from April to November 1944…”

The citation continues: “Serving with distinction in an assignment of vital importance, Captain Vosseller skillfully directed the operations of fighting forces under his command to assist in the sinking of a large number of enemy submarines throughout this period. In addition, he conceived and developed new and improved operational methods and invented weapons for use against hostile undersea crafts. By his professional skill, leadership and devotion to duty throughout, (he) contributed materially to the safety of convoys moving across the Atlantic in support of Allied operations in the European and African theaters of war…”

From November 1944 until July 1945 he served on the staff of Commander Fifth Fleet, and for exceptionally meritorious service in that assignment, was awarded a Gold Star in lieu of the Third Legion of Merit with Combat “V”. The citation follows in part:

“For….outstanding services…as Aviation Officer on the staff of Commander Fifth Fleet during periods of extended combat action in the capture and occupation of enemy Japanese-held Iwo Jima and Okinawa, and in carrier raids throughout the Nansei Shoto and the East China Sea, from November 29, 1944 to July 10, 1945. By his understanding of the tactical employment of aircraft, Captain Vosseller aided in the planning of these operations and, during their execution, furnished invaluable advice on aviation matters…”

He assumed command of the Naval Air Station, Patuxent River, Maryland, in July 1946, and in August 1948 went to sea as Commanding Officer of USS Coral Sea (CVE 43). In August 1949 he reported to the Office of the Secretary of Defense, where he served as Senior Navy Representative, Weapons Systems Evaluation Group. Ordered detached in October 1951, he reported the following month as Commander Carrier Division 18. In July 1952 he joined the staff of the Supreme Allied Commander, Europe, and served as Deputy Assistant Chief of Staff for Plans, for three years. In September 1955 he became Commander Naval Air Bases, Eleventh and Twelfth Naval Districts, Policy and Operations, with headquarters at the Naval Air Station, North Island, San Diego, California. He continued to serve in that capacity until relieved of all active duty pending his retirement effective 1 September 1956.