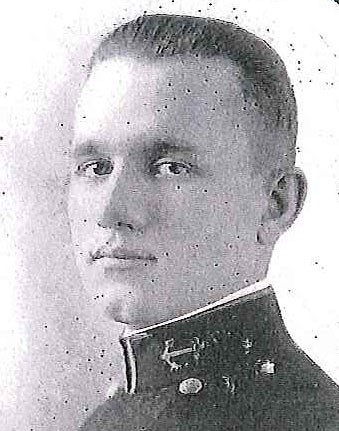 Frank Carl Louis Dettman was born in Cleveland, Ohio, May 12, 1897. He graduated from East Technical High School in his native city before appointment to the United States Naval Academy, Annapolis, Maryland, from the Twelfth District of Ohio in June, 1916. While a midshipman he had duty with the Atlantic Fleet during World War I. Graduated and commissioned Ensign with the Class of 1920 on June 7, 1919, he was promoted in the grades, attaining the rank of Captain to date from August 7, 1947. He was transferred to the Retired List of the Navy on June 30, 1950 and advanced to Rear Admiral on the basis of combat awards.

He remained at the Naval Academy on duty after graduation until October, 1919, when he joined USS Pueblo, and served aboard that cruiser until May, 1920. He then served at the Navy Yard, New York for four months before joining USS Tennessee in September, 1920. Thereafter he served consecutively in the William Jones, Fuller, Farquhar, and Argonne, until December, 1922, He was assigned in January, 1923 to USS Chewink for submarine instruction, and was a qualified submariner in June, 1924. He served aboard USS S-8 from August, 1923 to May, 1925. That submarine was a unit of Submarine Division 12, Submarine Divisions, Battle Fleet.

In June, 1926 he entered the Postgraduate School, Annapolis, for instruction in Engineering. After a year he reported to the Third Naval District, New York, New York, attended the Columbia University and completed the course in Diesel Engineering in June, 1928. He was detached the following September, and assumed command of USS S-18, with Submarine Division 4, Control Force, operating in the Atlantic. In December, 1930 he transferred to command of the R-3, at New London, Connecticut, and served until June, 1931 when he was relieved of command.

From July, 1931 to October, 1933 he was attached to the Industrial Department, Navy Yard, Portsmouth, New Hampshire. After serving from October, 1933 to January, 1934 at Headquarters, Third Naval District, he was assigned to USS New Orleans of Cruiser Division 6, Scouting Force, on the west coast, and had duty aboard until June, 1937. He was then ordered to the Submarine Base, New London, Connecticut, where he served until May, 1939.

After serving in the destroyer tender Melville for six months, he was assigned to USS Holland, submarine tender with the Battle Force in the Pacific, and served as Repair Officer from January, 1940 to August, 1942. Throughout the war he was assigned to submarine duty. Awarded the Gold Star in lieu of a second Bronze Star Medal with combat distinguishing device, V, he was cited “For meritorious achievement as Repair Officer of USS Holland in action against enemy Japanese forces during extended withdrawal from Manila, Philippine Islands to Australia from December 8, 1941 to March 15, 1942….As head of the Repair Department he directed the overhaul and refueling of more than twice as many submarines as the Holland shops were designed to tend…”

Reporting to the Navy Department, Washington, DC, in August, 1942, he was attached to the Bureau of Ships until December of that year. He was then ordered to San Francisco, California, and served two years in the Office of the Assistant Industrial Manager, US Naval Base.

Returning to the West Coast, he served nine months in the Office of the Commander Submarine Force, Pacific Fleet Administration, Mare Island, California. In July, 1946 he was ordered to report to the Navy Department, where he served until April, 1947 as a member of the Board of Inspection and Survey, Office of Chief of Naval Operations. At that time he transferred to the Bureau of Ships, and was attached to the Internal Combustion Engines Branch as Assistant Liaison Officer. He was so serving when relieved of active duty pending his retirement on June 30, 1950.