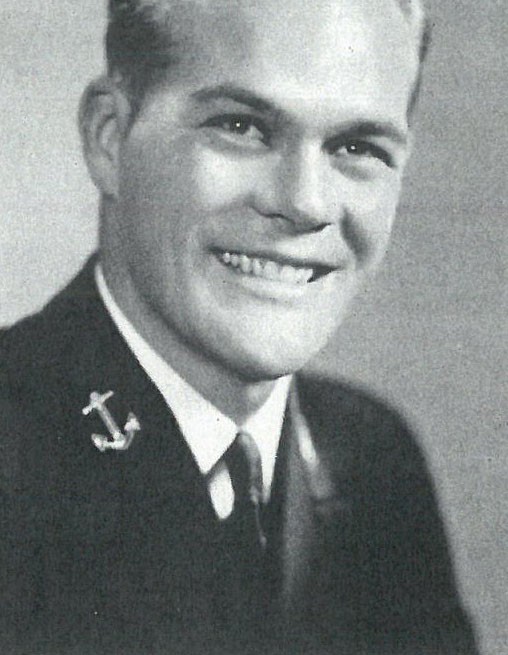 Burton Howell Andrews was born in Los Angeles, California, on 14 July 1916, son of Herbert Burton and Margaret Wilmarth (Howell) Andrews. He attended Los Angeles Public and Polytechnic High School and from March 1934 to June 1936 served as a Seaman on board various naval vessels. In 1936, he entered the US Naval Academy, Annapolis, Maryland, on appointment from his native state. Graduated and commissioned Ensign on 7 February 1941, he subsequently advanced in rank to that of Rear Admiral, to date from 1 March 1969.

Following graduation from the Naval Academy in 1941, he joined USS Macdonough and in November that year transferred to USS Aylwin. Detached from that destroyer in July l942, he was ordered to the Submarine Base, New London, Connecticut, where he had a month's duty as Assistant Personnel Officer and from September to December 1942 had submarine training. He next reported for fitting out duty in the USS Paddle at the Electric Boat Company, Groton, Connecticut and was assigned to that submarine as Torpedo and Gunnery Officer upon her commissioning, 29 March 1943. He was awarded the Bronze Star Medal, a Gold Star in lieu of the Second Bronze Star and the Navy Commendation Medal for outstanding service during the Third, Fourth and Seventh War Patrols during which time he rendered invaluable assistance in sinking an enemy tanker and a destroyer totaling over 10,000 tons, three additional enemy vessels and the damaging of two others.

He was serving as Executive Officer and Navigator of the Paddle when detached in April 1945 for instruction at the Postgraduate School, Annapolis, Maryland, from which he received the degree of Master of Science in Electronics Engineering. In June l9?9 he reported as Head of the Special Applications Branch, Electronic Division, Bureau of Ships, Navy Department, Washington, DC, where he remained until July 1952 and the next month became Executive Officer and Special Assistant to the Director of the Material Laboratory at the New York Naval Shipyard, Brooklyn.

In August 1955 he joined the Staff of the Commander in Chief, US Pacific Fleet and from August 1957 until June 1960 was assigned to the Mare Island (California) Naval Shipyard. He reported in July 1960 as Commanding Officer and Director of the Naval Underwater Sound Laboratory, Fort Trumbull, New London, Connecticut, and in February 1964 became Director of the Exploratory Development Division, Office of Naval Material, Navy Department. "For meritorious service..." in that capacity, he was awarded a Gold Star in lieu of the Second Navy Commendation Medal. The citation further states in part:

Assigned in January 1966 to the Office of the Director of Defense Research and Engineering, Office of the Secretary of Defense, Washington, DC, he remained there until August of that year, then became Deputy Director of Laboratory Programs, Naval Material Command, Navy Department, and Deputy Director of Navy Laboratories, reporting to the Assistant Secretary of the Navy (Research and Development). In August 1968 he assumed duty as Vice Commander of the Naval Electronic Systems Command, Washington, DC. He was awarded the Legion of Merit for services in that capacity and cited, in part, as follows: "...Rear Admiral Andrews has been the guiding and driving force in many major aspects of the development of a new command, including the building of an effective research and technology organization and development of concept of operations by which previously unrelated groups has been unified into a cohesive and effective whole..."

In May 1971 he reported as Deputy Director of Tactical Electro­magnetic Programs, Office of the Chief of Naval Operations, Navy Department and in October 1972 was transferred to the Naval Ship Systems Command, Washington, DC, where he served as Deputy Commander for Research and Development. "For exceptionally meritorious conduct...from November 1972 to June 1973..." he was awarded a Gold Star in lieu of the Second Legion of Merit. The citation further states in part: "...Displaying strong leadership and personal dedication, (he) provided the driving force to bring to, fruition a number of important research and development programs..."

On 1 June l973 he was transferred to the Retired List of the US Navy.

Rear Admiral Andrews' hobbies are amateur radio and photography. He is a member of the Masonic Order, the Society of Cincinnati, the American Radio Relay League, the Institute of Electrical and Electronic Engineers, and other professional organizations.