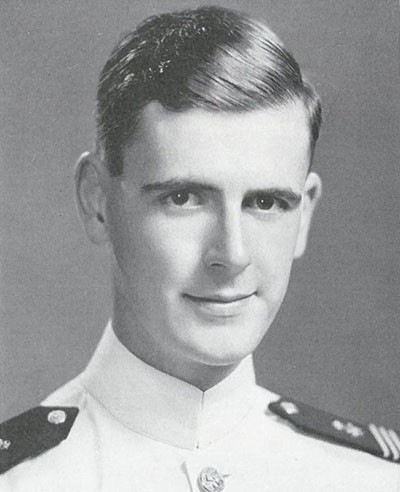 Richard Galt Zimermann was born in Washington, DC on 24 March 1920, son of Captain Alfred G. Zimermann, USN (now deceased) and Mrs. (Susan Duane Galt) Zimermann. He attended high schools in Washington, DC, Newport, Rhode Island, San Marina, California, enlisting in June 1938 in the US Naval Reserve. In 1939 he entered the US Naval Academy, Annapolis, Maryland, on appointment at large. Graduated with the Class of 1943 and commissioned Ensign on 19 June 1942 (accelerated course due to World War II), he subsequently advanced in rank to that of Captain, to date from 1 July 1962.

Following graduation from the Naval Academy in 1942, he joined the USS Frankford (DD 479) to serve as Antisubmarine Warfare Officer, Operations Officer and Assistant Gunnery Officer. While on board that destroyer, he participated in the invasions of Normandy and Southern France. He received a Letter of Commendation, with authorization to wear the Commendation Ribbon and Combat “V”, from the Commander TWELFTH Fleet, for his performance of duty as Combat Information Center Officer of the USS Frankford, during the invasion of France, 6 June 1944. The citation further states:

“…You supervised the CIC personnel whose efficient functioning during this operation can be directly attributed to your direction. Your excellent briefing and instruction of CIC personnel in the minute details of the ship’s part in the operation as screen commander’s flagship was commendable…”

In December 1944 he transferred to USS Wadsworth (DD 476) for duty as Gunnery Officer and Executive Officer. In that assignment, he saw action in the invasions of Iwo Jima and Okinawa Shima. “For conspicuous gallantry and intrepidity…in action against enemy Japanese forces off Okinawa Shima from 1 April to 24 June 1945…” he was awarded the Silver Star Medal. The citation continues: “Demonstrating outstanding courage in the face of twenty-two air attacks, (he) directed the gunfire of his ship in the destruction of six Japanese planes and in the damaging and repelling of others. On 27 April, he coordinated and controlled the main battery director during a night torpedo, strafing and suicide attack, thereby contributing materially to the shooting down of several enemy planes…” He is also entitled to the Ribbon for, and a facsimile of the Presidential Unit Citation awarded USS Wadsworth.

Detached from Wadsworth in January 1946, he then assumed command of USS Carroll (DE 171). In April 1946 he reported as Executive Officer of USS Alexander J. Luke (DER 571) and in May 1947 became Commanding Officer of USS Towhee (AM 388). As such he also served as Commander Mine Division TEN. In December 1948 he joined the Staff of Commander Mine Force, US Atlantic Fleet as Flag Lieutenant and in August 1950 was detached for a tour of duty in the Bureau of Naval Personnel, Navy Department, Washington, DC.

From March 1953 until July 1954 he commanded USS Hambleton (DMS 20), after which he attended the Command and Staff Course at the Naval War College, Newport, Rhode Island. Completing his instruction in June 1955, he reported the next month as Operations Officer of USS Albany (CA 123). In September 1956 he assumed command of USS Healy (DD 672) and in August 1957 was detached to command USS Corry (DDR 817). He was an Action Officer (Intelligence) for Joint Matters in the Office of the Chief of Naval Operations, Navy Department, during the period November 1958 to September 1961 and in November became Commander Landing Ship Squadron ONE. A year later he transferred to Destroyer Squadron NINETY-TWO, which he commanded until February 1964.

Assigned to the Joint Staff, Joint Chiefs of Staff, Washington, DC, he served as Head of the Near East Branch, Middle East, Africa and South Asia Division in the Plans and Policy Directorate from April 1964 until February 1967. In this latter capacity, he received the Joint Services Commendation Medal. The citation states in part, “distinguished himself by exceptionally meritorious service to the United States while assigned to the Plans and Policy Directorate, Joint Chiefs of Staff from April 1964 to January 1967 and contributed significantly to the development of regional planning and policy at the highest level in the security interest of his country.” He performed a leading role on behalf of the President and the Secretary of Defense by briefing a head of state of a foreign government which contributed significantly to the furtherance of United States objectives concerning that country. By his exemplary performance of duty, Captain Zimermann has reflected great credit upon himself, the Organization of the Joint Chiefs of Staff, and the United States Navy.”

He reported as Director of the Navy Recruiting Division, Bureau of Naval Personnel on 3 March 1967. For his performance in this duty he was presented the Meritorious Service Medal. The citation states in part: “…Tirelessly striving to recruit young men and women of sufficient numbers and superior quality to man the Navy, he was also personally responsible for the creation, development, and operation of the Navy’s Minority Recruiting Effort. Under his superb leadership, this outstanding effort has resulted in a doubling of the number of minority officers on active duty between 1967 and 1969. Captain Zimermann’s personal dedication to the ideals of the nation and the Navy was a source of great inspiration to his subordinates, whose efforts reflected directly on his leadership and professional abilities…Always seeking new and better ways of accomplishing his mission, he zealously directed his own efforts and those of his subordinates in many innovative and never before conceived ideas, both in operations and administration…”

On 15 July 1970, Captain Zimermann reported as the Commandant, East Coast Branch of the Defense Language Institute. For his performance in this capacity he received the Legion of Merit. His citation reads in part: “…Throughout his tour—Captain Zimermann displayed conspicuously outstanding leadership and managerial perception in developing the goal of “The Finest Possible Language Training Through Teamwork” and in directing efforts toward its attainment…” He retired after 30 years of commissioned service on 30 June 1972.

On 5 June 1966, he received his Master’s Degree in Personnel Administration from George Washington University, Washington, DC.

Captain Zimermann was a member of the Society of the Cincinnati of Virginia.

He was married to the former Dorothy Mae Dungan of Key West, Florida, and they had two sons.