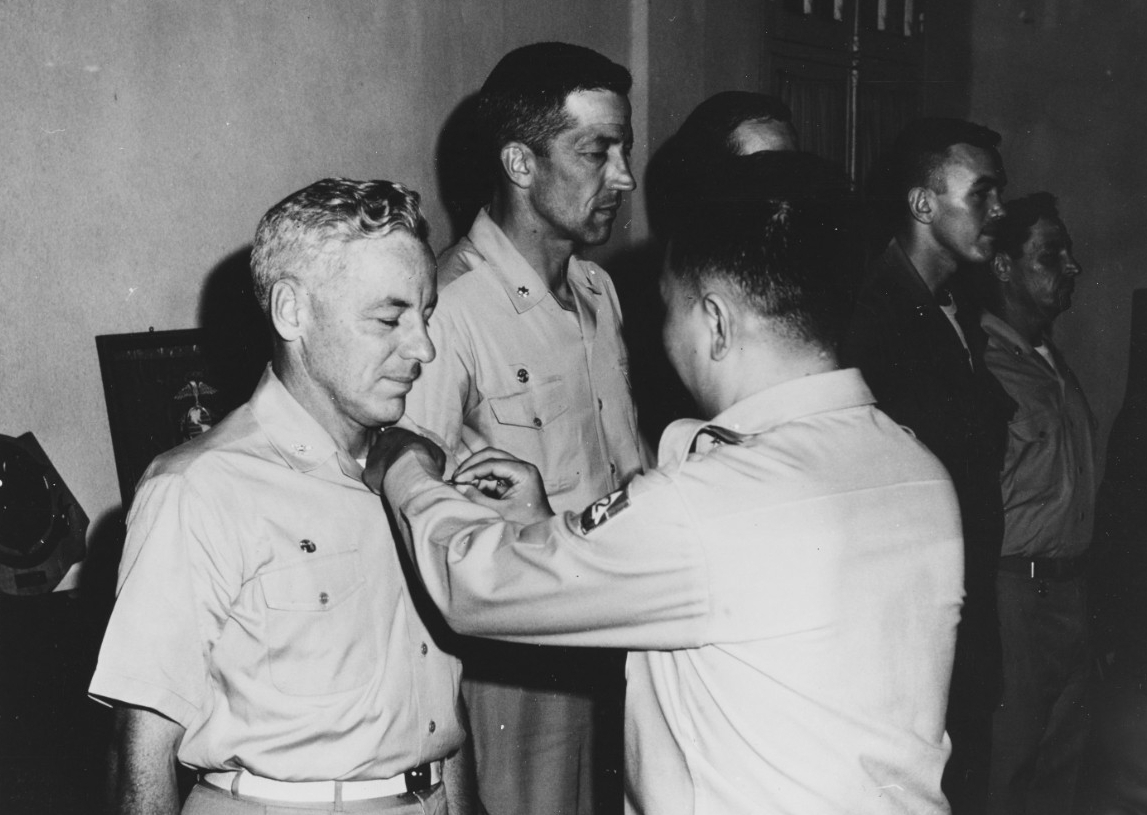 Harry Carl Allendorfer, Jr., was born in Johnstown, Pennsylvania, on 22 February 1919, son of Harry C. and Agnes (Beaujon) Allendorfer. He graduated from Westmont Upper Yoder High School, Johnstown, in 1936 and on a musical scholarship attended Valley Forge Military Academy, Wayne, Pennsylvania, from 1936 until 1938. He won a competitive appointment to the US Naval Academy, Annapolis, Maryland, and entered with the Class of 1942 in July 1938. Gradated and commissioned Ensign on 19 December 1941 (course of instruction reduced due to the war), he subsequently advanced in rank, attaining that of Captain, to date from 1 July 1961.

On graduation from the Naval Academy, he was assigned to USS Wichita which operated with the British Home Fleet on convoy duty in the North Atlantic. He remained on board that heavy cruiser throughout World war II, serving in every theater, including operations at Casablanca, Rennel Island, Aleutian Islands, Marshalls, Asiatic-Pacific raids (1944), Hollandia, Marianas, Western Carolines, Western New Guinea, Leyte, Okinawa, Luzon, and in the THIRD Fleet Operations against Japan. When the Japanese surrendered, his ship was ordered to Nagasaki to expedite the liberation of over 10,000 prisoners of war being held by the Japanese and was one of the first into Nagasaki after the atomic bomb blast.

Detached from the Wichita in October 1945, he joined the Staff of Commander Task Force FIFTY-FIVE (Japanese occupation force) as Operations Officer. He next had duty, February to November 1946, as Assistant Operations Officer on the Staff of Commander Task Group ONE point TWO (Operation CROSSROAD - the first atomic bomb test at Bikini). Reporting as Aide to the General Inspector of the Pacific Fleet, he spent time, while in that assignment, in Samoa, Kwajalein and other Pacific Islands. In April 1947 he was assigned as Flag Secretary and Personnel Officer on the Staff of Commander Destroyer Force Pacific and in August 1948 became Public Information Officer and Aide to the Superintendent of the Naval Gun Factory, Washington, DC.

During the period August 1950 until April 1951 he was seamanship Officer in the Readiness and Training Department on the Staff of Commander Destroyer Force, Atlantic, after which he commanded USS Maloy. Under his command, the Maloy participated in the experimental development of new anti-submarine equipment in addition to the regular fleet exercises of the Atlantic Fleet Destroyer Force. Ordered to the Naval War College, Newport, Rhode Island, he was a student from August 1952 until June 1953, when he became a member of the faculty at the college. He remained there until June 1955, when he assumed command of USS Miller.

He was detached from command of the Miller in September 1957, then served as Head of the Chief of Naval Operations Briefing Section, Navy Department, Washington, DC. In June 1961 he became Commander Destroyer Division TWO HUNDRED TWO, and a year later was assigned as Aide and Executive Assistant to the Commander in US Atlantic Fleet. He reported in December as Chief of Staff and Aide to the commander Carrier Division TWENTY, and in June 1965 reported as Commander Destroyer Squadron THIRTY-TWO. Under his command that squadron operated in the Vietnam area during the period June to December 1966. He was awarded the Vietnamese Cross of Gallantry with Gold Star by the Government of the Republic of Vietnam as a sign of appreciation for effective naval gunfire support provided by his squadron and for his service as Commander of all the naval gunfire support ships. In February 1967 he reported to the Chairman of the Joint Chiefs of Staff, Washington, DC, where he then served with the Special Studies Group assigned to the General Purpose Forces Branch.