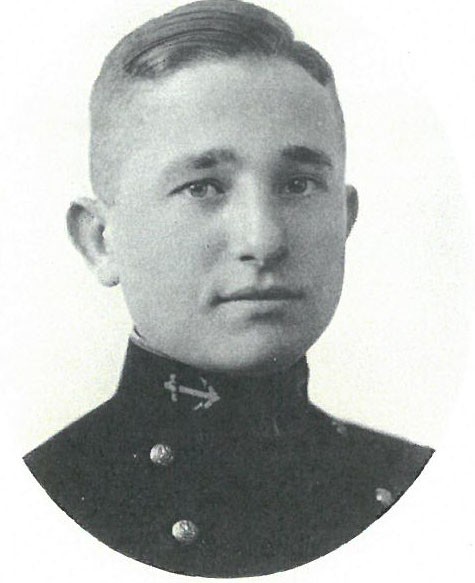 George Henry Bahm was born in Philadelphia, Pennsylvania, July 20, 1900, son of the late William Bahm, and Mrs. Elizabeth Vogel Bahm. Upon graduating from Frankford High School in Philadelphia, he entered the United States Naval Academy, Annapolis Maryland, in June, 1917, by appointment from the Fifth District of Pennsylvania. During the war years he had summer cruises with the Atlantic Fleet. Graduated and commissioned Ensign in June 1920 with the Class of 1921-A, he advanced through the grades until his promotion to the rank of Captain to date from August 7, 1947. On June 30, 1950 he was transferred to the Retired List of the Navy in the rank of Rear Admiral, advanced on the basis of combat awards.

Upon graduation in June, 1920, he was assigned to the USS Florida and served two years in that battleship, having detached duty from July to December, 1921, at the Naval Torpedo Station, Newport, Rhode Island. He then had duty until June, 1933 consecutively in the USS Pittsburgh, USS Raleigh, Headquarters First Naval District, Boston, Massachusetts, and in the USS Childs. For one year thereafter, he attended Naval War College, Newport, Rhode Island, completing the Junior Course, followed by one year under instruction at the Marine Corps School, Quantico, Virginia, for the Field Officers Course.

From June to December, 1935, he was Executive Officer of the destroyer Leary. He then assumed command of USS Schenck, of Destroyer Squadron 10, Scouting Force, with the Eighth Naval District Drill detachment, and served until May, 1937. He transferred to USS Arkansas, also with the Drill Squadron, serving for one year aboard as Gunnery Officer. He then had instruction at the Chemical Warfare School, Edgewood Arsenal, Edgewood, Maryland, before reporting to the Army Industrial College, Washington, DC, for instruction from September, 1938 to June, 1939. Ordered to the Navy Yard, Washington, DC, he served three months before reporting, in September, 1939, for duty in the Office of the Chief of Naval Operations, Navy Department, Fleet Maintenance Division.

After serving briefly on the Board of Inspection and Survey, Rockland, Maine, and in the Office of the Naval Inspector of Machinery, New York Shipbuilding Corporation, Camden, New Jersey, he reported aboard the newly commissioned destroyer tender, USS Dixie, and served as her Executive Officer for three years, April 1940-1943. That vessel, after a brief shakedown cruise out of Philadelphia, cruised down the East Coast, calling at many ports, transited the canal and arrived at San Diego, California. During the war she found herself in such places as New Caledonia; New Hebrides; the Northern and Southern Solomons; and remained with the pacific Fleet throughout the war. He was awarded the Legion of Merit, and cited “For exceptionally meritorious conduct in the performance of outstanding services…as Executive Officer, and later as Commanding Officer of the USS Dixie during operations against enemy Japanese forces in the Forward Pacific War Areas from December, 1941 to April 1943. Organizing his ship into one of the most efficiently operated tenders in the Pacific, Captain Bahm directed the servicing of large numbers of destroyers with great effectiveness during important operations against the enemy in the Solomons campaign…”

Returning to the Navy Department in May, 1943, he assigned to Headquarters, Commander in Chief, US Fleet until January, 1945. When detached, he was given command of USS San Juan, light cruiser, with the Pacific fleet. He was awarded the Gold Star in lieu of the second Legion of Merit, with combat distinguishing device, V, and was cited “For exceptionally meritorious conduct…as Commanding Officer of the San Juan in action against enemy Japanese forces in Kyushi Area of the Japanese Homeland, and in support of the landing at Okinawa from March 22 to May 19, 1945. Maintaining the fighting efficiency of the San Juan at a high peak throughout this period, (he) aided in providing effective defensive antiaircraft fire during numerous hostile air attacks, thereby contributing materially to the success of the Task Group…Participating in the bombardment of Minami on April 21, he directed the batteries of his ship in starting large fires and in destroying Japanese installations…”

He also received a Letter of Commendation with Ribbon awarded by the Commander Third Fleet, stating: “For outstanding services in the performance of his duties as Commanding Officer of a cruiser while operating with a Special Task Group for the evacuation of Allied Prisoners of War from Japan. He skillfully and diligently executed the varied duties assigned him. His initiative and devotion to duty in the prompt liberation, and in many cases the saving of lives of thousands of Allied Prisoners of War…”

When relieved of that command in April, 1946, he had duty as Commanding Officer, Naval Operating Base, Leyte-Samar, Philippine Islands, and from April to September, 1947, he was Chief of Staff to Commander Northern Force, Philippines.

Returning home, he reported in October, 1947, to the Bureau of Naval Personnel, Navy Department, and was assigned to the staff of Commander in Chief, Atlantic Fleet, at Norfolk, Virginia, for duty as Assistant to the General Inspector. Detached from staff duty, he was ordered in May, 1948 to command the Naval Ammunition Depot, Hingham, Massachusetts. He was so serving when relieved of active duty pending his retirement June 30, 1950.