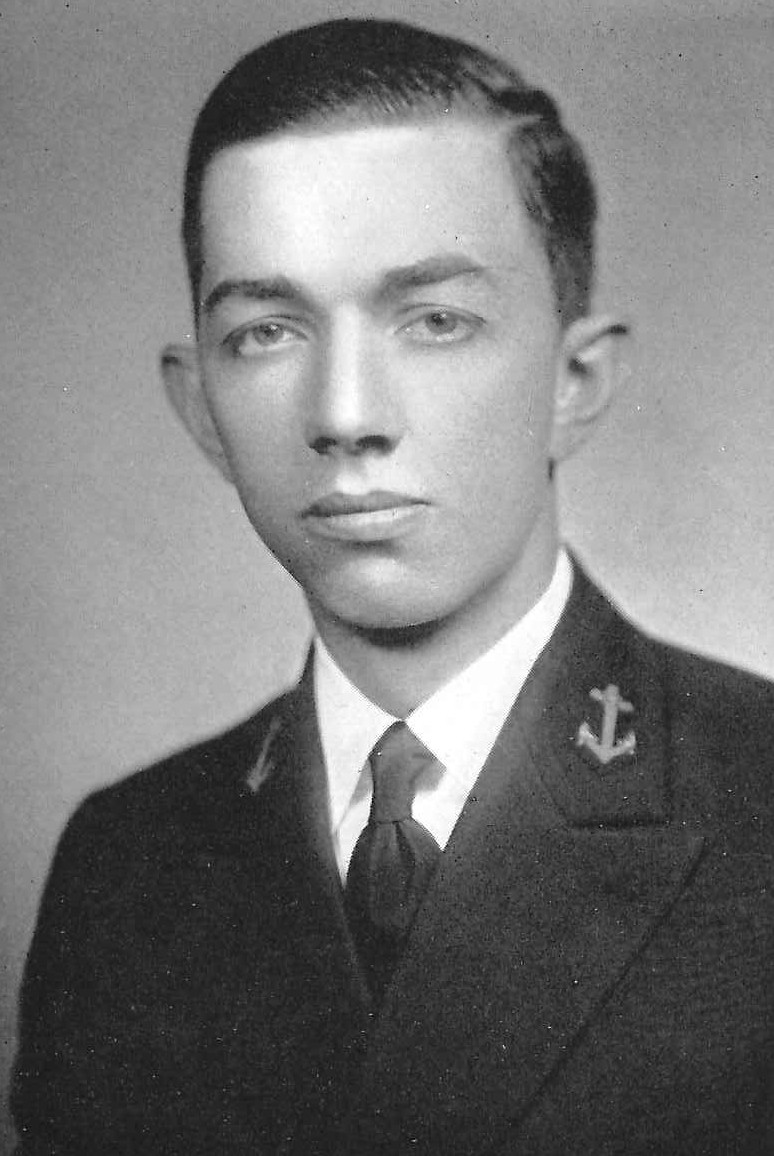 Eugene Alexander Barham was born in Oak Ridge, Louisiana, on December 28, 1911, son of Thomas Eugene and Lillian Pipes Barham.  He attended Swavely Preparatory School in Washington, DC, in 1929-1930, and entered the US Naval Academy, Annapolis, Maryland, on June 30, 1930, on appointment from the Fifth Congressional District of Louisiana.  Graduated and commissioned Ensign on June 6, 1935, he advanced in rank, subsequently attaining that of Captain to date from July 1, 1954.

After graduation in 1935, he was assigned to the USS Nevada (BB 36), and served for eleven months as a junior officer on board that battleship.  Transferring in May 1936 to the USS Overton (DD 239), a destroyer of the Battle Force, he had duty as Communication Officer, and later Executive Officer, before his detachment in November 1937.  During the two year period to follow, he served as First Lieutenant of the USS Cushing (DD 376), and as Communication Officer of the USS Altair (AD 11).

In November and December 1939 he assisted in fitting out the USS Kennison (AG 83), and from her commissioning, December 18, 1939 until June 1940 served as her Engineer Officer.  Ordered next to the USS Gillis (AVD 12), he had successive duty as Engineer Officer, Air Officer and Commanding Officer of that auxiliary-seaplane tender (ex-destroyer) during the period just prior to the United States’ entry into World War II, on December 8, 1941 and until detached in January 1942.

After duty in connection with fitting out the USS Laffey (DD 724), at Bethlehem Steel Company’s Union Plant, San Francisco, California, he joined that destroyer as Engineer Officer at her commissioning, April 1, 1942.  “For meritorious achievement as Engineering Officer of the USS Laffey during a night surface action against outnumbering enemy Japanese forces off Savo Island, on November 13, 1942…” he was awarded the Bronze Star Medal, with Combat “V.”  The citation continues in part:

“Quick to act after his ship had sustained serious damage as a result of enemy shell and torpedo hits, (he) re-entered the steam filled engine spaces to inspect the damage and to determine the possibility of raising sufficient steam for getting underway.  With extensive fire in vital areas spreading rapidly and raging beyond control, the abandon ship order was given and carried out and subsequently Lieutenant Barham rendered invaluable aid in the rescue of survivors after Laffey had exploded and sunk…”

Early in 1943 he assisted in fitting out the USS Dashiell (DD 659) at Federal Shipbuilding and Dry Dock Company, Kearny, New Jersey, and after her commissioning on March 20, served first as Executive Officer, and from December 30, 1943 until August 1944, in command.  He received a Letter of Commendation, with Ribbon, from the Commander in Chief, Pacific Fleet, as Follows: “For meritorious service in connection with operations against the enemy while serving as Commanding Officer of the USS Dashiell in the southwest Pacific from 16 February to 24 July 1944…His ship performed escort duty and conducted shore bombardment on enemy installations at Kavieng and Hollandia…”

Returning to the Naval Academy in September 1944, he completed a tour of duty in the Executive Department, as Battalion Officer, and in September 1946 joined the staff of Commander Operational Development Force, at Headquarters, Norfolk, Virginia.  From July 1948 to May 1949 he was Commanding Officer of the USS English, after which he reported to the Illinois Institute of Technology, for duty as Executive Officer of the Naval Reserve Officer Training Unit until September 1950.  During sixteen months to follow, he served on the staff of Commander Naval Forces, Far East.

He was a student at the Armed Forces Staff College, Norfolk, Virginia, from February to July 1952, and for a year thereafter served as Commander Fleet Training Group, Key West, Florida.  In August 1953 he reported as Commander Destroyer Division TWO SIXTY TWO.  In January 1955 he reported to the Fleet Air Defense Training Center, Dam Neck, Virginia Beach, Virginia, as Commanding Officer.

In addition to the Bronze Star Medal with Gold Star and Combat “V,” and the Commendation Ribbon, Captain Barham has the Ribbon for, and a facsimile of the Presidential Unit Citation awarded the USS Laffey for action on November 13, 1942.  He also has the American Defense Service Medal, Fleet Clasp; the American Campaign Medal; Asiatic-Pacific Campaign Medal; World War II Victory Medal; and the National Defense Service Medal.