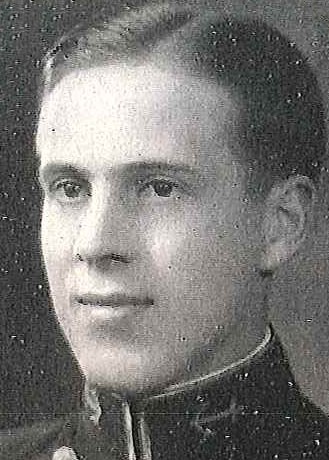 Maxim William Firth was born in Bennington, Vermont, on June 22, 1908, son of William Charles and Mildred LaFountian Firth. He attended Bennington High School and had one year as Massachusetts Institute of Technology, Cambridge, Massachusetts, before entering the U.S Navy Academy, Annapolis, Maryland, on appointment from his native state, on June 14, 1927. As a Midshipman he participated in lacrosse, crew and basketball. Graduated with the degree of Bachelor of Science on June 4, 1931, he was commissioned Ensign in the US Navy from that date, and subsequently advanced to rank of Captain, to date from June 1, 1950.

After graduation from the Naval Academy in June 1931, he was assigned to the Milwaukee, and served as a Watch and Junior Division Officer on board that cruiser until October 1933. During the next eight months he had duty as Communication Watch Officer on the Staff of the Commander Battle Force, and from June 1934 to June 1935 had communication duties on the Staff of the Commander in Chief, US Fleet.

During the period June 1935 to July 1938 he had successive sea duty as Watch and Communication Officer of the USS Wasmuth, Watch and Torpedo Officer of the USS Reid, and Watch and 1st. Lieutenant of the USS Sirius. He was a student at the Naval Postgraduate School, Annapolis, Maryland, during the next nine months, completing the General Line Course, and in June 1939 joined the USS Brooklyn for duty as Watch and Division Officer and Assistant Gunnery Officer. He was serving in the Brooklyn at the outbreak of World War II, in December 1941and, detached in February 1942 was ordered to command the USS Spry (PG-64).

In command of that gunboat, and later commanding the USS Flaherty (DE-135) from May to October 1943, in the Atlantic, Caribbean and South Atlantic Area, he severed as Commanding Escort Division 37 from November 1943 until August 1944. Under his command that Division operated in the South Pacific ad Southwest Pacific Area, and participated in the New Guinea Campaign. He was detached with orders to command of the USS Claxton (DD-571), assuming command in November 1944 and commanding that destroyer throughout the remaining period of hostilities. Participating in amphibious operations in the Philippines and Okinawa, he was awarded the Bronze Star Medal with Combat “V,” and (later) the Silver Star Medal. The citation follow, in part:

Bronze Star Medal:  “For meritorious achievement as Commanding Officer of the USS Claxon prior to and during operations against enemy Japanese forces on the Corregidor Island, Philippine Island, from February 15 to 26, 1945. Maneuvering his ships in waters made dangerous by shoals and enemy mines, Commander Fifth closed Corregidor Island to Point-blank range and directed gun fire in support of Army forces engaged in the recapture of the Island. Under his direction the guns from his ship neutralized enemy offensive and defensive strength, and inflicted heavy material and personnel causalities on the Japanese… (He) was largely responsible for the successful operation of his ship toward the recapture of Corregidor…”

Silver Star Medal: “For conspicuous gallantry and intrepidity as Commanding Officer of the USS Claxton, in action against enemy Japanese forces during the capture and defense of Okinawa Shima and outlying islands in the Ryukyu Chain, from May 16 to August 12, 1945. Staunchly aggressive in combat, Commander First fought his ship gallantry in urgent fire support, screening and radar picket duty despite the savage attacks of Japanese torpedo, bombing and kamikaze planes and , skillfully countering the repeated onslaughts of viciously diving enemy aircraft with the devastating firepower of his heavy guns, executed adroit evasive maneuvers which enabled him to proceed expeditiously in the furnishing of timely warning to our vital shipping concentrations without sustaining material or personnel causalities on board his vessel. Under his able direction, the Claxton’s gunners shot down five of the attacking planes during this critical period of operations…”

In October 1945 he reported to the Navy Department, Washington, DC, for a tour of duty in the Office of Industrial Relations, later transferring to the Naval transferring to the Naval Transportation Service. Detached from the latter in January 1948, he became Executive Officer of the USS Toledo. He served on board that cruiser until June 1949, being in command from October 1948 until January 1949. In July 1949 he reported to the Staff of Commander Atlantic Reserve Fleet, serving as Ordnance Officer and Assistant Material Officer until April 1952, when he was ordered to the Staff of Commander Cruiser Division 6, as Chief of Staff. He remained on duty in that capacity until August 1953.

A student at the Naval War College, Newport, Rhode Island, until June 1954, he completed the course in Strategy and Tactics, then served for 18 months as Logistics Officer on the Staff of the Commander Naval Forces, Germany. In December 1955 he assumed command of the USS Estes (AGC-12) and in March 1957 he was detached for duty as Commanding Officer, Naval Administrative Command, US Naval Postgraduate School, Monterey, California.