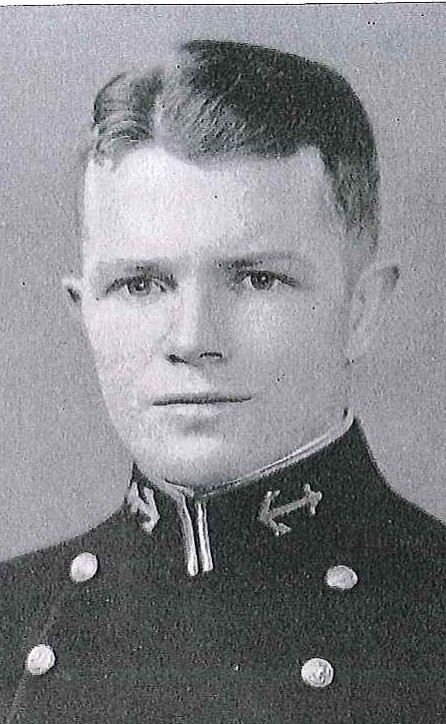 George Woodson Ashford was born in Watkinsville, Georgia, on February 18, 1908, son of William Henry and Hallie Quillen Ashford. He attended Athens (Georgia) High School and had a year at the University of Georgia before entering the US Naval Academy in 1925. As a Midshipman he was Captain of the Naval Academy Wrestling Team for two years. Graduated and commissioned Ensign on June 6, 1929, he subsequently advanced to the rank of Captain to date from March 30, 1945.

After graduation from the Naval Academy in June 1929, he had sea duty on board USS New York and USS Utah, battleships operating with the Battle Fleet and Scouting Fleet, respectively. In 1930, he returned to the Naval Academy for brief duty as Assistant Wrestling Coach, and later that year was ordered for flight training to the Naval Air Station, Pensacola, Florida. He completed flight training and was designated Naval Aviator in December 1930, and during the five years to follow served with Fighting Squadron 3F, based on USS Langley, later on USS Lexington, and with Patrol Squadron 5, operating from Coco Solo, Canal Zone. During that period he was a member of the American Olympic Wrestling Squad in 1932.

From January 1936 until June 1938 he served in USS Colorado, a unit of Battleship Division 4, Battle Force, and for a year thereafter served in USS Barry, operating with Destroyers, Battle Force. He was next ordered to the Georgia School of Technology, Atlanta, Georgia, where he had duty in connection with the Naval Reserve Officer Training Corps, and late in 1940 was detached for duty afloat. At the outbreak of World War II he was serving as Flag Lieutenant on the Staff of Commander Support Force, and continued duty on that staff and as Flag Secretary on the Staff of Commander Task Force 24 until June 1943.

He served during the remainder of 1943 and throughout 1944 as Gunnery Officer of USS Biloxi, operating in the Pacific Area, and “For heroic service (in that capacity) during action against enemy Japanese forces.. on October 13, 1944,…” was awarded the Bronze Star Medal, with Combat “V.” The citation continues: “Opening fire with all of his batteries when hostile aircraft came within range, he promptly checked fire as the range was fouled by other ships of the formation and commenced firing again as the range was cleared. By his precise control of his batteries, he prevented hitting any ships of his formation and assisted materially in repulsing the enemy attack…”

Early in 1945 he transferred from command of the Biloxi to duty as Operations Officer on the Staff of Commander Service Squadron SIX. He was awarded a Gold Star in lieu of the Second Bronze Star Medal “For meritorious service as Operations Officer on the Staff of the Commander of the Logistic Support Group of the THIRD and FIFTH Fleets, during operations against enemy Japanese forces in the vicinity of Iwo Jima, Okinawa, Honshu, Hokkaido and during the occupation of the Tokyo Bay Area, from November 25, 1944, to September 26, 1945…” The citation further states:

“…An able administrator, Captain Ashford rendered valuable assistance in the furnishing of logistic support at sea to ships of the THIRD and FIFTH Fleets engaged in amphibious operations and, by skillfully directing the support of fast carrier strikes, contributed materially to the eminent success of the operations…”

Remaining in the Far East during the occupation of Japan operations, Captain Ashford returned to the United States late in 1945, and in 1946-1947 served in the Office of the Chief of Naval Operations (Publications Panel), Navy Department, Washington, DC. In August 1947 he assumed command of USS Canisteo (AO-99), and when detached a year later reported to the Fifth Navy Recruiting Area, Chicago, Illinois, to be Inspector of Navy Recruiting. Completing that tour of city in June 1951, e was next assigned as Director, Pacific Command Petroleum Office, Service Force, Pacific Fleet, and from March 1953 until July 1954 served as Chief of Staff and Aide to Commander Service Squadron 3.

“For exceptionally meritorious conduct…as Chief of Staff to Commander Service Squadron THREE during operations against enemy aggressor forces in Korea from 14 March to 27 July 1953…” he was awarded the Legion of Merit with Combat “V,” and citation which further states:

“Throughout this period, Captain Ashford discharged his many responsibilities with exceptional skill and initiative and was highly successful in solving the many problems of rendering effective mobile logistic support to the SEVENTH Fleet…and assured the successful replenishment of combat units by Task Force NINETY TWO despite the difficulties imposed by changing conditions… A capable and resourceful officer, he effectively directed staff efforts in the integration of the logistic forces available to meet the requirements of continuous day and night operations, and assured that all replenishment requirements in the combat area were fulfilled, thereby permitting combat units of the SEVENTH Fleet to launch record offensives against the enemy during the final days of the conflict. By his outstanding professional ability, sound judgement and conscientious devotion to duty, (he) contributed in large measure to the combat readiness of the SEVENTH Fleet…”

In October 1954 he assumed command of Destroyer Squadron 22, and after his detachment in January 1956, was designated Chief, Navy Section, Military Assistance Advisory Group, Japan, arriving in Tokyo in March of that year. Under orders of September 17, 1957, he currently serves as Commander Military Sea Transportation Service, Gulf Sub Area/Navy Control of Shipping Office, with headquarters in New Orleans, Louisiana.

Captain Ashford is a member of Kappa Alpha Fraternity (University of Georgia).