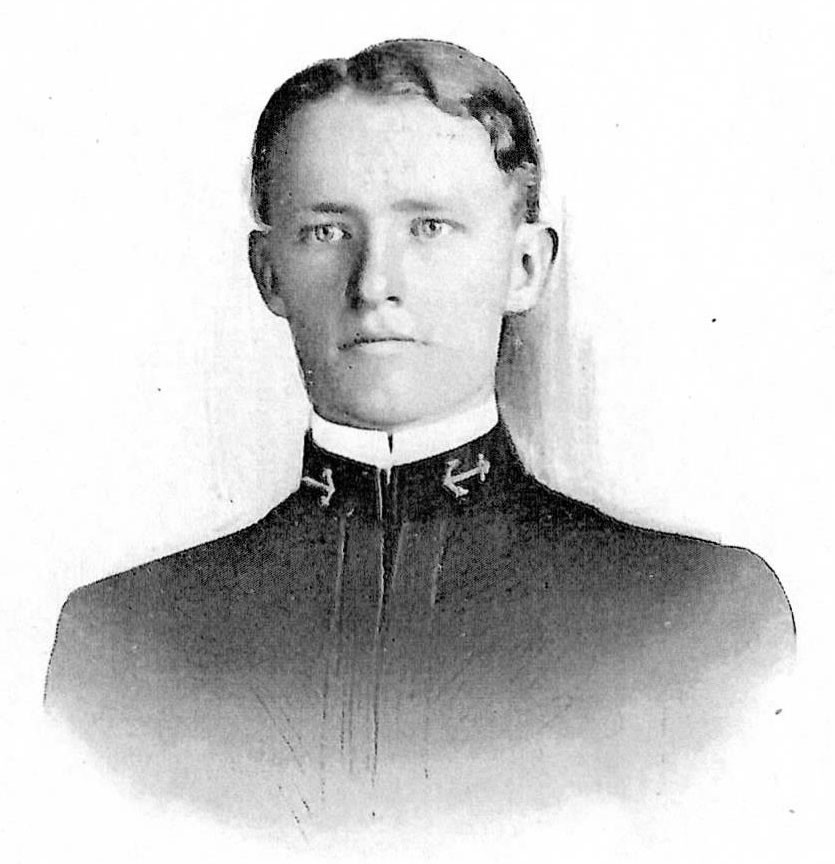 Fleet Admiral Nimitz, born in Fredericksburg, Texas, February 24, 1885, attended Tivy High School, Kerrville, Texas, before his appointment to the US Naval Academy from the Twelfth District of his native state in 1901. He graduated with distinction, seventh in a class of 114, in January 1905. After graduation he joined USS Ohio in San Francisco. California, on February 23, 1905, and cruised in her to the Far East where she became flagship of the Asiatic Fleet. In September 1906 he was transferred to USS Baltimore and was commissioned Ensign, January 31, 1907, while serving in that ship. During his remainder of his stay on Asiatic Station he consecutively commanded USS Panay and USS Decatur, and served in USS Denver.

Fleet Admiral Nimitz returned to the United States in USS Ranger in December 1908, and in January 1909 reported for instruction in the First Submarine Flotilla. In May of that year he was given command of that that flotilla, which additional duty in command of USS Plunger (later renamed A-1). He was commissioned Lieutenant, both grades, on January 31, 1910, and was transferred to command of USS Snapper when that submarine was commissioned on February 2, 1910. On November 18, 1910, he assumed command of USS Narwhal. From October 10, 1911, he had additional duty as a Commander, Third Submarine Division, Atlantic Torpedo Fleet. He assumed command of USS Skipjack (later renamed-1) on February 14, 1912.

On March 20, 1912, Fleet Admiral Nimitz (then Lieutenant) rescued W.J. Walsh, Fireman Second Class, US Navy, from drowning. A strong tide was running and Walsh, who could not swim, was being rapidly carried away from his ship/ When picked up, Fleet Admiral Nimitz and Walsh were exhausted. For that service, he was awarded a Silver Life Saving Medal by the Treasury Department.

From May 1912 until March 1913, Fleet Admiral Nimitz was Commander, Atlantic Submarine Flotilla. After being detached from that command he was ordered to duty in connection with the building of Diesel engines in the tanker USS Maumee  then under construction at the New London Ship and Engine Building Company, Groton, Connecticut. During the summer of 1913 he studied engines at the Diesel Engine plants in Nuremberg, Germany, and Ghent, Belgium, and then returned to the New York Navy Yard where the Maumee was completed. He joined her when she was commissioned October 23, 1916, serving as her executive officer and engineer officer until August 4, 1917. While in that duty he was commissioned Lieutenant Commander on August 26, 1916.

On August 10, 1917, Fleet Admiral Nimitz reported for duty as aid on the staff of Rear Admiral Samuel S. Robison (now Admiral, Retired), Commander, Submarine Force, Atlantic Fleet. On February 1, 1918, he was commissioned Commander and on February 6, he was appointed Chief of Staff to Admiral Robison, and, for service in that duty, was awarded the following Letter of Commendation by the Secretary of the Navy:

“He performed meritorious service as Chief of Staff to the Commander, US Atlantic Submarine Fleet.”

Fleet Admiral Nimitz reported for duty in the Office of the Chief of Naval Operations, Navy Department, Washington, D.C., on September 16, 1918. On October 25, he was assigned additional duty as Senior Member, Board of Submarine Design, Navy Department. He was executive officer of USS South Carolina for May 1919, until June, 1920, when he was detached with orders to command USS Chicago, with additional duty in command of Submarine Division Fourteen, based on Pearl Harbor, TH. He joined USS Argonne on April 7, 1922, and cruised back to the east coast of the United States in her. He had instruction at the Naval War College, Newport, Rhode Island, in 1922-1923, and following that duty had a second tour on the staff of Admiral Robison, serving as aide and assistant chief of staff when the latter was Commander, Battle Fleet, and when he was Commander in Chief, US Fleet.

In August, 1926, Fleet Admiral Nimitz was ordered to the University of California where he installed, and later taught in, one of the first Naval Reserve Officers Training Corps units established in a university. He was commissioned Captain on June 2, 1927. In June, 1929, he was ordered to command Submarine Division Twenty (changed to Submarine Division Twelve, April 1, 1931). In June, 1931, he was transferred to command of USS Rigel and the destroyers out of commission at the Destroyer Base, San Diego, California. In October, 1933, he assumed command of the USS Augusta and cruised in her to the Far East where, in December of that year, she relieved USS Houston as flagship of the Asiatic Fleet. After detachment from command of the Augusta in April, 1935, he served as Assistant Chief of the Bureau of Navigation for three years. He attained flag rank on June 23, 1938, and was Commander, Cruiser Division Two, Battle Force, from July until September, 1938, when he was transferred to duty as Commander, Battleship Division One, Battle Force, holding that command until May, 1939.

On June 15, 1939, Fleet Admiral Nimitz was appointed Chief of the Bureau of Navigation for a term of four years. On December 17, 1941, he was detached from that assignment and ordered to duty as Commander in Chief, Pacific Fleet, with the rank of Admiral, effective from December 31, 1941, the date when he assumed that command. For his service in this capacity, Fleet Admiral Nimitz has been awarded the Distinguished Service Medal, with the following citation:

“For exceptionally meritorious service as Commander in Chief, United States Pacific Fleet. In that position of great responsibility he exercised sound judgment and decision in his employment and disposition of units of the Pacific Fleet during the period immediately following our entry into war with Japan. His conduct of the operations of the Pacific Fleet, resulting in successful actions against the enemy in the Coral Sea, May, 1942, and off Midway Islands, June, 1942, was characterized by unfailing judgment and sound decision, coupled with skill and vigor. His exercise of command on all occasions left nothing to be desired.”

He has also been awarded a Distinguished Service Medal by Congress with the following citation:

“For exceptionally meritorious service to the Government of the United States in a duty of great responsibility as Commander in Chief of the Pacific Fleet since December 31, 1941. At the most critical period of the preset war in Pacific, Admiral Nimitz assumed command in that area and despite the losses at Pearl Harbor and tragic shortage of vessels, planes and supplies, organized his forces and carried on defensive warfare which halted the Japanese advance. As rapidly as hips, personnel and material became available, he shifted from defensive to offensive warfare and, by his brilliant leadership and outstanding skill as a strategist, enabled the units under his command to defeat the enemy in the Coral Sea, off Midway, and in the Solomon Islands; and to capture and occupy the Gilbert and Marshall Islands. As a result of his sound judgment and masterful conducts off naval warfare in the Pacific, our forces have assumed a position of dominance in this vital area.”

On October 5, 1945. Officially designated as Nimitz Day in Washington, DC, Fleet Admiral Nimitz was personally presented a Gold Star in lieu of the third Distinguished Service Medal by the President of the United States. The citation follows:

GOLD STAR in lieu of the third DISTINGUISHED SERVICE MEDAL:

“For exceptionally meritorious service to the Government of the United States as Commander in Chief, United States Pacific Fleet and Pacific Ocean Areas, from June 1944, to August 1945. Initiating the final phase in the battle for victory in the Pacific, Fleet Admiral Nimitz attacked the Marianas, invading Saipan, inflicting a decisive defeat on the Japanese Fleet in the First Battle of the Philippines and capturing Guam and Tinian. In vital continuing operations, his Fleet Forces isolated the enemy-held bastions of the Central and Eastern Carolines[sic] and secured in quick succession Peleliu[sic], Angaur[sic] and Ulith[sic]i. With reconnaissance of the main beaches on Leyte effected, approach channels cleared and opposition neutralized in joint operations to reoccupy the Philippines, the challenge by powerful task forces of the Japanese Fleet resulted in a historic victory in the three-phased Battle for Leyte Gulf, October 24 to 26, 1944. Accelerating the intensity of aerial offensive by pressure exerted at every hostile strong point, Fleet Admiral Nimitz Culminated long-range strategy by successful amphibious assault on Iwo Jima and Okinawa. A wise, Steadfast and indomitable leader, Fleet Admiral Nimitz, by his daring strategy and his faith in the courage and skill of the officers and men under his command, finally placed representative forces of the United States Navy in the harbor of Tokyo for the formal capitulation of the Japanese Empire. Through his mastery of naval warfare, his strategical skill, his sound judgement and his inspiring leadership, he demonstrated the highest qualities of a naval officer and rendered services of the greatest distinction to his country.”

On November 20, 1945, Fleet Admiral Nimitz was nominated to be Chief of Naval Operations in the Department of the Navy, for a term of two years, that nomination confirmed by the Senate on November 26, 1945.

On November 24, 1945, at Pearl Harbor, TH, Fleet Admiral Nimitz hauled down his flag, hoisted in December 1941 aboard the submarine Grayling in a harbor littered with wreckage of American warships from the Japanese attack on December 7, 1941, from the submarine Menhaden and relinquished command of his victorious Pacific Fleet. On December 15, 1945, he relieved Fleet Admiral Ernest J. King, USN, as Chief of Naval Operations, Navy Department, Washington, DC.

Fleet Admiral Nimitz promotion to the permanent grade of Fleet Admiral of the Navy was confirmed by the Senate to rank from December 19, 1944.

Fleet Admiral Nimitz has received Honorary Degrees from the following Universities and Colleges: