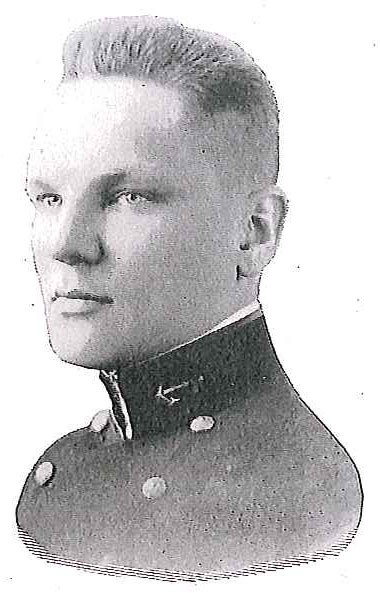 Walter Charles Ansel was born August 25, 1897, in Elgin, Illinois.  He was graduated from the Elgin High School before his appointment to the US Naval Academy, Annapolis, Maryland, from Illinois in 1915.  Graduated from the Academy ad commissioned Ensign with the Class of 1919 n June 1918, he subsequently advanced through the various grades, attaining the rank of Captain on June 17, 1942, and was transferred to Retired List of the Navy in the rank of Rear Admiral on June 30, 1949.

During World War, he served in USS Rambler, engaged in patrol operations off the coast of France.  In subsequent years he had duty in numerous ships and at shore establishments, completed the Naval War College junior course, the course in strategy and tactics and the field officers course at the Marine Corps School, and devoted much time and effort to the development of the technique and corresponding doctrine and manuals for amphibious landing operations.

When World War II started he was on duty in the Office of the Chief of Naval Operations. On January 15, 1942,he reported at the Bethlehem Steel Company, Key Highway Plant, Baltimore, Maryland, for duty in connection with the conversion of the SS Calusa to USS Winooski, oiler.  He commanded his vessel from her commissioning, January 27, 1942, until July 1942 in the North Atlantic operations.  He was then ordered to the Staff of Commander Advance Group, Amphibious Force, Atlantic Fleet, as Plans and Operations Officer.  This Group became the Naval Port Support Group in the United Kingdom for the North African Invasion with oran, Alg[sic], as its objective.  In the landings at Alg November 8, 1942, he commanded the Advance Party, entered the small port of Arzew in the wake of the assault units, secured the shipping and prepared the port for unloading operations.  He was subsequently awarded the Commendation Ribbon with Combat “V,” for these services.

In April 1943, he was transferred to duty as Assistant Chief of Staff and Operations Officer on the Staff of Commander, Amphibious Forces, North African Waters.  For his services in this duty leading up to and during the invasion of Sicily, he was awarded the Legion of Merit and cited “for exceptionally meritorious conduct in the performance of outstanding service…during the invasion of the Island of Sicily in July 1943.  Charged with the preparation and coordination of the plans for all the Task Groups comprising a major assault force,…he contributed in large measure to the highly successful amphibious assault during the invasion of the Island.”

On October 31, 1943, he was ordered to command the cruiser Philadelphia in the Mediterranean.  Early in 1944 the Philadelphia supported the operations at Anzio and Formia and in the summer of 1944 took part in the invasion of Southern France.  In this latter operation, with Marines from the Philadelphia and Augusta, he accepted the surrender of the German garrisons of the fortress islands off Marseilles.  He was awarded a Gold Star in lieu of a Second Legion of Merit (with Combat “V”) and the Croix de Guerre with Silver Star by the French Government.  The citation for the Second Legion of Merit states:  “For exceptionally meritorious conduct in the performance of outstanding services to the Government of the United States as Commanding Officer of the USS Philadelphia, during the amphibious invasion of Southern France in August 1944.”

Returning to the United States with the Philadelphia late in 1944 and during 1945, he served in the Officer of the Chief of Naval Operations.  In December 1946 he was ordered to duty as Chief of Staff and Aide to Commander, Cruiser Division ONE of the Support Group, Japan.  Upon his return from Japan early in 1947, he served in the office of the Under Secretary of the Navy.  On September 29, 1947, he was ordered to Rio de Janeiro, Brazil as a member of the US Naval Mission to that country.  He continued in that assignment until relieved of all active duty pending his retirement on June 30, 1949.

In addition to the Legion of Merit and Gold Star in lieu of a Second Legion of Merit, the Croix de Guerre with Silver Star (France), and the Commendation Ribbon, Rear Admiral Ansel holds the Victory Medal, Patrol Clasp, the China Service Medal; the American Defense Service Medal with Fleet Clasp; the American Campaign Medal the European-African-Middle Eastern Campaign Medal with four bronze stars, and the World War II Victory Medal.