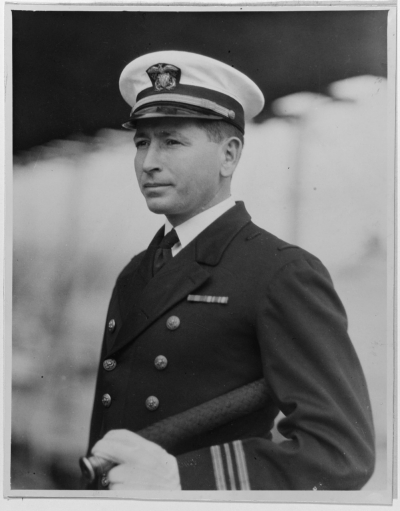 Ellis Mark Zacharias was born in Jacksonville, Florida, on 1 January 1890, son of Alron and Theresa (Bidwig) Zacharias. He was appointed to the US Naval Academy from his native state in 1908. Graduated and commissioned Ensign on 8 June 1912, he progressed through subsequent promotions to the rank of Captain, to date from 1 July 1939. He was transferred to the Retired List of the US Navy on 1 November 1946, and advanced to the rank of Rear Admiral, on the basis of combat citations.

After graduation in June 1912, he served briefly in the battleships Vermont and Kentucky, and in August had duty in connection with fitting out USS Arkansas. He joined that battleship when she was commissioned 17 September 1912, and was aboard when she later transported President William Howard Taft to inspect the Panama Canal before the water was turned into it. In July 1913 he joined the battleship Virginia, and after four years’ service was transferred to duty as Engineer Officer in the survey ship Hannibal. During World War I he had duty as Engineer Officer of the cruiser Raleigh, and as Gunnery Officer of the cruiser Pittsburgh, which operated in the Atlantic and in June 1919 was transferred to the cruiser Huntington.

He was an instructor in the Department of Marine Engineering and Naval Construction, Naval Academy, Annapolis, Maryland from September 1919 until August 1920, when he was appointed Assistant US Naval Attaché to Japan. While attached to the American Embassy, Tokyo, Japan, he studied the Japanese language and people. Shortly before his detachment, he was assigned rescue work following the Japanese earthquake of 1 September 1923, experienced in the city of Yokohama. From November to December 1923, he served as First Lieutenant of the USS Huron, flagship of the Asiatic Fleet.

After his return to the United States, he had two years’ duty as Navigator of USS Rochester, operating around Panama with the Special Service Squadron, and was with General John Pershing, US Army, in Arica, Chile, to assist in settling the Taena-Arica boundary dispute between Chile and Peru. In August 1926, he returned to duty on Asiatic Station, and after commanding the destroyer McCormick, rejoined the Pittsburgh, flagship of the Asiatic Fleet, serving as her navigator from December 1926 until July 1928.

Again temporarily assigned to Tokyo, he served as Acting Naval Attaché until November 1928 when he returned to the United States. He next had duty in charge of the Far East Division of the Office of Naval Intelligence, Navy Department, Washington, DC, for a little more than two years. During that assignment he was designated Aide to His Imperial Highness, Prince Takamatsu or Japan, brother of the Japanese Emperor, during his two months’ visit to the United States in 1931. Later that year he returned to sea in command of the destroyer Dorsey. Detached from that command in June 1933, he completed the senior course at the Naval War College, Newport, Rhode Island, and from June 1934 until June 1936 again had duty in the Office of Naval Intelligence, this time Head of the Far East Division.

From July 1936 until February 1938, he served as Executive Officer of the cruiser Richmond. In May 1938 he reported for duty as District Intelligence Officer, Eleventh Naval District, San Diego, California. During that assignment, which ended in November 1940, he had duty in April 1939 as Naval Aide to His Royal Highness, Crown Prince Frederic of Denmark and Iceland, during the latter’s visit to the Pacific Coast aboard the motor ship Canada. During his tour as District Intelligence Officer, several espionage cases were successfully developed and prosecuted under his direction.

Under his command from 14 November 1940 until 28 May 1942, USS Salt Lake City, heavy cruiser, was in company with a Task Force returning from Wake Island where fighter planes had been delivered to Colonel Devereux, USMC, when the Japanese attacked Pearl Harbor on 7 December 1941. They entered the harbor at noon the following day, and early in January 1942 got underway with a Task Force to the South Pacific. On 1 February 1942, when the US Navy, on the offensive for the first time in this war, carried out the first of a series of raids on the Gilbert and Marshall Islands, Salt Lake City, accompanied by another cruiser and one destroyer, played a prominent part in the effective bombardment of the island of Wotje in the Marshalls. Every enemy coast defense gun was silenced, four or five cargo ships and one patrol boat sunk, two freighters damaged; and all shore installations leveled, after which the Salt Lake City assisted in screening the aircraft carrier Enterprise until the Task Force returned to port.

Under his command on 24 February 1942, Salt Lake City, in company with another cruiser and two destroyers, bombarded Wake Island. Eight days later, on 4 March 1942, she was again at sea, acting as a unit of the screen for the Enterprise while planes from that carrier bombed Marcus Island. In April 1942, she was one of the vessels protecting the aircraft carrier Hornet which launched the ARMY planes of Lieutenant General Doolittle, US Army, for their famous first raid on Tokyo.

Rear Admiral Zacharias received a Letter of Commendation, with authorization to wear the Commendation Ribbon, from the Commander in Chief, Pacific Fleet, as follows: “For distinguished service in the line of his profession in action, and especially for his bold and effective handling of his ship in bombardment of enemy shipping and shore installations during the action on 1 February 1942, in distant enemy waters. By his determined and aggressive action, he inflicted serious damage on the enemy and contributed to the successful retirement of the Task Force in the face of heavy enemy bombing attack.”

Upon his return to the United States, he served from June 1942 until August 1943, as Deputy Director of the Office of Naval Intelligence, Navy Department. He was awarded the Legion of Merit “For exceptionally meritorious conduct…while acting as a advisor and liaison officer between the Office of Naval Intelligence and the Office of Strategic Services from May 10 to 1 September 1943…” The citation states further: “Selected for this work because of his excellent professional training and his extensive knowledge of the naval organization and ordnance developments of foreign powers, Captain Zacharias rendered indispensable aid in the prosecution of subversive undertakings which culminated in eliminating from the war an enemy power and in acquiring a knowledge of secret weapons which proved to be of extreme value to the Allied cause…”

On 9 September 1943, he assumed command of USS New Mexico at the Navy Yard, Puget Sound, Washington, following her participation in the Aleutians Campaign. Under his command, that battleship participated in the recapture of the Gilbert Islands, heavily bombarding the shore of Butaritari Islands in the Makin Atoll before the landings on 20 November 1943. In January 1944, during the largest offensive yet undertaken and directed against the Marshall Islands, New Mexico, part of the Task Force, bombarded Ebeye Island, and on 1 February of that year bombarded Kwajalein and incidentally achieved the distinction of being the first battleship ever to enter the Kwajalein lagoon. During these operations she suffered her first casualty of the war when one of her planes was shot down and lost with its pilot.

During the latter part of February 1944, New Mexico bombarded Taroa Island in the Maleclap Atoll and Wotje Island in the Wotje Atoll, both in the Marshalls. Under his command, she carried the flag of the Commander of a Battleship Division and was the first of the old battleships to operate with escort carriers. Early in March, she formed part of a Task Force which bombarded Kavieng in New Ireland, and in June and July took part in action in the Marianas against Tinian and Guam. After landings had been made at Guam, she provided harassing fire until the island was secured having fired almost continuously for nineteen days. The Marianas campaign completed almost a year of heavy bombardment for New Mexico and she was returned to the Puget Sound Navy Yard for overhaul, and he was detached from command on 14 September 1944.

He was awarded a Gold Star in lieu of a Third Legion of Merit with Combat “V”, “For exceptionally meritorious conduct…as Commanding Officer of the USS New Mexico during action against enemy Japanese forces in the Marshall, Gilbert and Marianas Islands, from 20 November 1943 to 30 July 1944…” The citation continues: “(He) expertly maintained his ship at the peak of efficiency throughout almost continuous offensive action against many heavily fortified enemy held islands in this vital war area and, by his superb ship handling and brilliant leadership, contributed materially to the successful operation of the New Mexico during the bombardment of Makin, Kwajalein, Wotje and Kavieng and during the assault and capture of Saipan, Tinian, Rota and Guam…”

On 20 October 1944 he reported for duty as Chief of Staff and Aide to the Commandant, Eleventh Naval District, San Diego, California. On 10 April 1945, he returned to the Navy Department and was assigned temporary duty with the Commander in Chief, US Fleet, with his services made available to the Office of War Information, the facilities of which were used in conducting the intensive and successful psychological warfare campaign against the Japanese High Command which culminated in the unconditional surrender of the Japanese on 14 August 1945. On 15 June 1945, he was assigned to the Office of Public Information, Navy Department, continuing his availability to OWI.

He was awarded a Gold Star in lieu of the second Legion of Merit and cited “For exceptionally meritorious conduct in the performance of outstanding services to the Government of the United States as spokesman for the United States Government Psychological Warfare Program, from 8 May to 4 August 1945. Undertaking his assignment during a critical period of the war, Captain Zacharias achieved distinctive success in executing this phase of the Psychological Warfare Program against the Japanese Empire. He contributed materially to the reduction of Japanese morale. Administering his responsibilities with care and broad vision, he

rendered invaluable service in the initiation, coordination and execution of plans for the basis of the Psychological Warfare Program…”

On 8 August 1945 he was detached from all other duty and assigned to the Office of War Information. He was later relieved of all active duty pending his retirement on 1 November 1946. He died on 27 June 1961 at his summer home in West Springfield, New Hampshire.