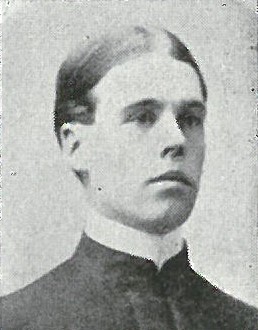 Frank Dunn Berrien was born on August 17, 1877, at Galesburg, Illinois, son of Leonard Budd Berrien and Harriet May (Smith) Berrien. He was graduated from Clinton, Iowa, High School with the Class of 1895, and entered the U.S. Naval Academy the next year as a member of the Class of 1900.  As a Midshipman he participated in the Spanish-American War in 1898, aboard USS Cincinnati.  He was a 3-“N” man, winning his letter in football, baseball and track.  He broke the high hurdle record in 1900, and that year was awarded the Thompson Trophy for having done most for the promotion of athletics at the Naval Academy.

Graduated from the Naval Academy in 1900, he served the two years at sea, then required by law, before being commissioned Ensign in 1902. By subsequent promotions, he attained the rank of Rear Admiral to date from June 3, 1922.  He was transferred to the Retired List in that rank on June 1, 1935.

Following graduation, he served four years on the Asiatic Station in the Flagships Brooklyn and New Orleans, where he participated in both the Boxer War in China and in the Philippine Campaign.  From 1904 to 1907 he served in the Atlantic Fleet on the battleships Kentucky and Missouri.   During the cruise of the Fleet around the world in 1907-1908 he served on the staff of Admiral C. M. Thomas.  He was head coach of the Nay football team at Annapolis during the seasons of 1908, 1909, and 1910. The 1910 season was the only one in which a Navy team completed a season with its goal line uncrossed.  This included a victory over West Point.

From 1911 to 1914 he commanded the destroyer Trippe, participating in the Mexican Campaign of 1914.  After two years in charge of the Naval Magazine at Hingham, he was ordered to Newport, Rhode Island, where he graduated from the Naval War College in 1917.

During World War I, he commanded the destroyer Nicholson   and later the Wilkes, based on Queenstown, Ireland, where he commanded numerous destroyer escort, engaged in protecting troop convoys to France and England.  Just before the Armistice, he commanded the Hospital Ship Comfort on a trip from New York to Brest.   For short periods during the War he served on the staff of Admiral Sims in London and of Admiral Wilson at Brest.

Rear Admiral Berrien was awarded the Distinguished Service Medal, with citation as follows: “For exceptionally meritorious service in sea duty of great responsibility as Commanding Officer of USS Nicholson, engaged in the important, exacting, and hazardous duty of patrolling the waters infested with enemy submarines and mines, in escorting and protecting vitally important convoys of troops and supplies through these waters, and in offensiveand defensive action, vigorously and

“…unremittingly prosecuted against all forms of enemy naval activity and especially for an engagement on November 17, 1917, in association with the USS Fanning, with the German submarine U-58, as a result of which the submarine was forced to come to the surface and surrender.”

Immediately after the Armistice, he became Naval Port Officer at Bordeaux, France, until June 1919, when he returned to the United States to become Chief of Staff to Admiral Wiley, Commander, Destroyer Force Pacific Fleet. From 1921 to 1923 he was in command of the Submarine Base, New London, Connecticut, and of the submarines based there. For two years thereafter he commanded the destroyers in Europeans waters. He returned to the United States in the summer of 1925 and was graduated from the Army War College, Washington, D.C., in 1926.

Later in 1926 he established, and for two years commanded, the Naval Unit at Yale University.  He then had a course at the Naval Air Station, Pensacola, Florida, after which he commanded the aircraft carrier Lexington for two years, 1928-1930. From 1930 until 1934 he served as Captain of the Yard, Navy Yard, Washington, D.C.

Upon his request for active duty during World War II, Rear Admiral Berrien was ordered, in March 1942, to report to the Office of the Chief of Naval Operations Navy Department.  On March 19, 1942 he was assigned duty in the Twelfth Naval District, in connection with convoys, and served until July 29, 1942, when he was again relieved of active duty.

In addition to the Distinguished Service Medal, Rear Admiral Berrien had the following Campaign medals: West Indies Campaign – Spanish American War – 1898; China Relief Expedition – Boxer War - 1900; Philippine Campaign Medal (1900-1904); Mexican Campaign Medal (1914); and the World War I Victory Medal (1917-1918).  He also had the Order of St. Michael and St.  George, awarded by the British Government, for his services in World War I; and the Greek Government made him a Commander of the Order of the Savior.