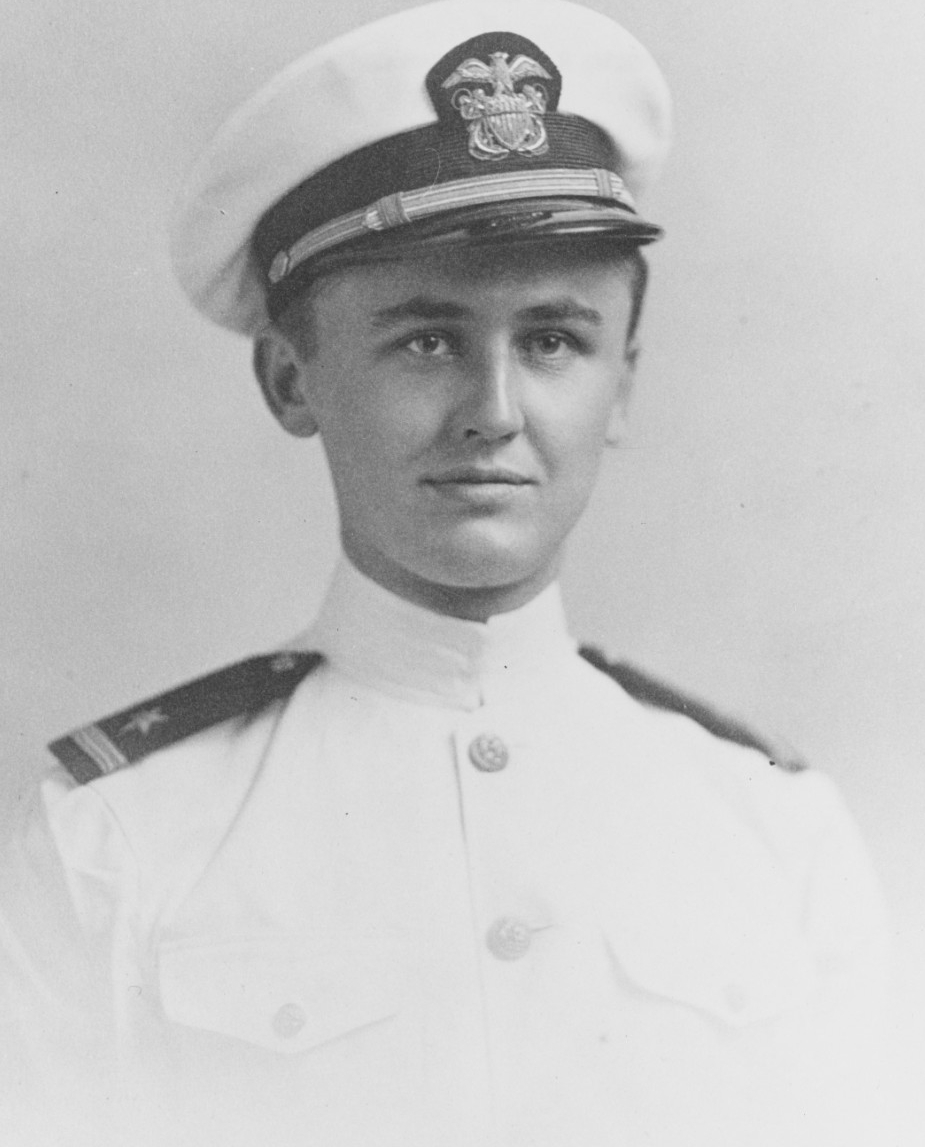 Edward Ackerman was born in Cincinnati, Ohio, on 3 September 1915, son of William A. and Marie Brinkman Ackerman. He attended Walnut Hills High School in Cincinnati and Maryville College, Maryville, Tennessee, prior to his appointment to the US Naval Academy, Annapolis, Maryland, from the Second Ohio District in 1935. Graduated and commissioned Ensign on 1 June 1939, he subsequently advanced in rank to that of Lieutenant Commander, to date from 15 March 1944.

After graduation from the Naval Academy he was assigned to USS Mississippi, and after brief service in that battleship was detached on 13 September 1939, to assist in fitting out USS Overton, at San Diego, California. He went aboard that destroyer at her commissioning 26 September 1939, and served until 22 December 1940, when detached for instruction at the Submarine Base, New London, Connecticut. Completing the course on 29 March 1941, he reported to USS Grayback, then building at the Electric Boat Company, New London, and was on board for the builder's trials, 1 April, and after her commissioning on 30 June 1941.

He served in various capacities on board USS Grayback, Which won the Navy Unit Commendation for heroic service in the Pacific Area, and was personally awarded the Silver Star Medal and a Gold Star in lieu of the Second Silver Star Medal, for service in that submarine. The citations follow, in part:

Silver Star Medal: "For conspicuous gallantry and intrepidity While serving as Diving Officer and Assistant Fire Control Officer...during seven war patrols of the (GRAYBACK) against enemy Japanese forces in alien Waters. Calmly and skillfully maintaining depth control of his ship throughout numerous vigorous torpedo attacks, (he) rendered invaluable assistance to his commanding officer in pressing home each effective assault in the face of extremely severe enemy countermeasures. On one occasion, When a main ballast tank manhole gasket blew out, endangering the safety of his vessel, he immediately took corrective action to prevent loss of trim and serious damage or possible destruction...(and) contributed materially to the sinking and damaging of an important amount of vital Japanese shipping..."

Gold Star in lieu of the Second Silver Star Medal: "For conspicuous gallantry and intrepidity as Assistant Approach Officer of the USS GRAYBACK, during the Ninth War Patrol of that vessel in enemy Japanese-controlled waters from December 2, 1943 to January 4, 1944. Skilled in the performance of duty, Lieutenant Ackerman assisted his commanding officer in conducting successful torpedo attacks against enemy shipping which resulted in the sinking of six enemy ships and an armed trawler totaling 23,955 tons and the damaging of two additional ships totaling 11,021 tons. During enemy countermeasures, he contributed materially to his vessel's success in avoiding damage..."

Detached from Grayback on 24 January 1944, he was ordered to Submarine Division 62 for duty in connection with relief crews, and following brief duty reported to the Supervisor of Shipbuilding, Manitowoc Shipbuilding Company, Manitowoc, Wisconsin, on 3 April 1944, for builders trials. The Kete was commissioned in July 1944, and on 20 February 1945, he assumed command of that submarine. He was awarded a Gold Star in lieu of the Third Silver Star Medal for heroic service in that command, while the Kete operated in hazardous waters off Nansei Shoto. The citation follows, in part:

"For conspicuous gallantry and intrepidity as Commanding Officer of the USS KETE...during the Second War Patrol of that vessel, commencing March 11, 1945. Alert and aggressive as he navigated through waters surrounding Japanese­controlled seas, Lieutenant Commander Ackerman conducted bold attacks against enemy merchant shipping despite severe hostile countermeasures and, by his superb ship-handling and his expert knowledge of submarine combat tactics, sent to the bottom three freighters totaling 12,000 tons. A brilliant and intrepid leader, (he) continued his daring offensive action until an overwhelming concentration of enemy surface vessels subjected his gallant craft to vicious counterattacks. His resolute determination, courageous conduct and unswerving devotion to duty served as an inspiration to the officers and men under his fearless command and upheld the highest traditions of the U. S. Naval Service."

Lieutenant Commander Ackerman was officially determined to be missing in action as of 31 March 1945, when the Kete failed to return from her war patrol in the vicinity of the Nansei Shoto. In compliance with Section 5 of Public Law 490, as amended, death is presumed to have occurred on 1 April 1946.