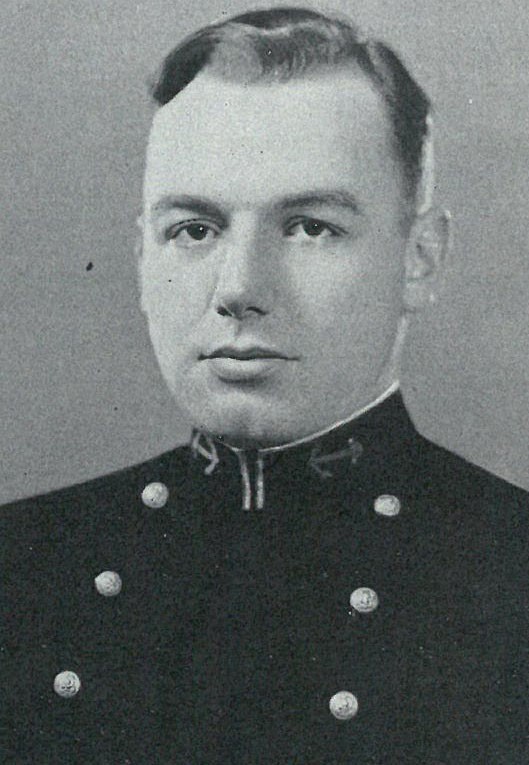 Samuel Clay Anderson was born in Kansas City, Missouri, on 20 February 1907, son of Mr. and Mrs. Mark Anderson of Osawahomie, Kansas. He entered the US Naval Academy, Annapolis, Maryland, on 22 June 1925, on appointment from the state of Iowa, and was graduated and commissioned Ensign on 6 June 1929. Through subsequent promotions he attained the rank of Captain on 1 January 1951, to date from 30 March 1945, having previously served in that rank (temporary) during World War II.

Following graduation from the Naval Academy in June 1929, he was assigned to USS Idaho, and served as a junior officer in that battleship, a unit of Division 4, Battle Fleet, until October 1930. He then reported to USS Louisville building at the Puget Sound, Washington, Navy Yard, and served aboard from her commissioning in March 1931 until June 1933, while that cruiser operated with Cruiser Division 5 of the Scouting Force.

He continued sea duty from June 1933 until April 1936 in USS Dewey, and for two years thereafter he served as Assistant to the Naval Inspector of ordnance at Rochester, New York. He had duty aboard USS Enterprise from June 1938 to September 1951, and when the United States entered World War II in December of that year, he was serving as Executive Officer of USS Worden, in the Pacific. As such he participated in action at Pearl Harbor Midway, Guadalcanal-Tulagi and Eastern Solomons (Stewart Island), before his detachment in March 1943.

On 15 March 1943, her commissioning date, he assumed command of USS McCook, and during the year following, took her on convoy trips to Casablanca, French Morocco; Trinidad; and Ireland. In March 1944 he reported to the Navy Department, Washington, DC, to serve for two years in the Office of the Commander in Chief, US Fleet. He received a Letter of Commendation "For outstanding service in the performance of his duties as Assistant to the Fleet Operations Officer at Headquarters of the Commander in Chief, US Fleet, from 12 March 1944 to 10 October 1945..."

He was attached to the Office of the Chief of Naval Operations for a few months before reporting in April 1946 as Assistant Naval Attaché and Assistant Naval Attaché for Air at Shanghai, China. After his detachment in June 1947 he assumed command of USS Andromeda (AKA-15), remaining in command until September 1948. A student at

the Naval School of General Line, Monterey, California, he completed the postgraduate course in Naval Administration, Island Government, and in February 1949 reported as Deputy High Commissioner, Trust Territory of the Pacific Islands, and Chief of Staff (Administration) on the staff of Commander Naval Forces, Marianas.

After sea duty from 10 September l951 until June 1952 in command of USS Montrose, he returned to the Navy Department for duty ae Head of the Policy Control Branch, Naval Intelligence Division in the Office of the Deputy Chief of Naval Operations (Operations), his present assignment.