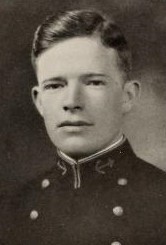 Lieutenant Commander Fairchild was born December 28, 1906, in Monticello, Kentucky, the son of Wilburn F. Fairchild and Mrs. Nannie Frisbie Fairchild. He attended Monticello High School, before enlisting in the U.S Navy on May 16, 1925. On June 17, 1926, he was discharged to accept an appointment, from the U.S Navy at large, to the U.S Naval Academy at Annapolis, Maryland. While a Midshipman he participated in boxing and lacrosse and was a member of the Reception Committee. Graduated and commissioned Ensign on June 5, 1930, he advanced to the grade of Lieutenant, to date from June 30, 1938. Transferred to the Retired List of the US Navy on January 1, 1940, he was promoted, on the Retired List, to the grade of Lieutenant Commander, to date from June 15, 1942.

Following graduation from the Academy in 1930, Lieutenant Commander Fairchild had engineering duty, from July 1930 to January 1931, in the USS California. Detached from the battleship he had fitting out duty in the USS Chicago, and upon her commissioning on March 9, 1931, reported aboard. While serving in the Chicago he received commendatory letters from the Chief of Naval Operations and his Commanding Officer concerning her service as Boiler Officer aboard that cruiser, when she won the engineering trophy for the fiscal year 1932-1933. As Turret Officer he was commended for excellent gunnery performance during the years 1933 and 1934. Again he received a commendatory letter in1935 for training the Scouting Force Boxing Team.

In June 1935, Lieutenant Commander Fairchild joined the USS Kane, operating in European waters. During his tour of duty in her, that destroyer evacuated American refugees from the Spanish war zone, and while on that assignment she repelled an attack, in August 1936, by a large tri-motored bombing plane which made three runs on the Kane. He served, from July 1947 until May 1939 as an Instructor in the Department of Seamanship and Navigation at the Naval Academy, after which he reported aboard the USS Wyoming for duty. He remained aboard that battleship until August 1939, when he was ordered to return to the United States to await further orders pending retirement. He was transferred to the Retired List of the US Navy on January 1, 1940.

Recalled to active duty in November 1940, Lieutenant Commander Fairchild again reported as an Instructor in the Department of Seamanship and Navigation at the Naval Academy. He remained in that assignment until August 1942, after which he attached to the University of California at Berkeley, California, for duty in connection with the Naval Reserve Officers Training Corps Unit at that University. From June 1943 to March, he was assigned to the Naval Reserve Midshipman’s School at the University of Notre Dame. At the time of his death on May 11, 1944 at San Francisco, California, he was serving at the Advanced Base Personnel Depot, San Bruno, California.