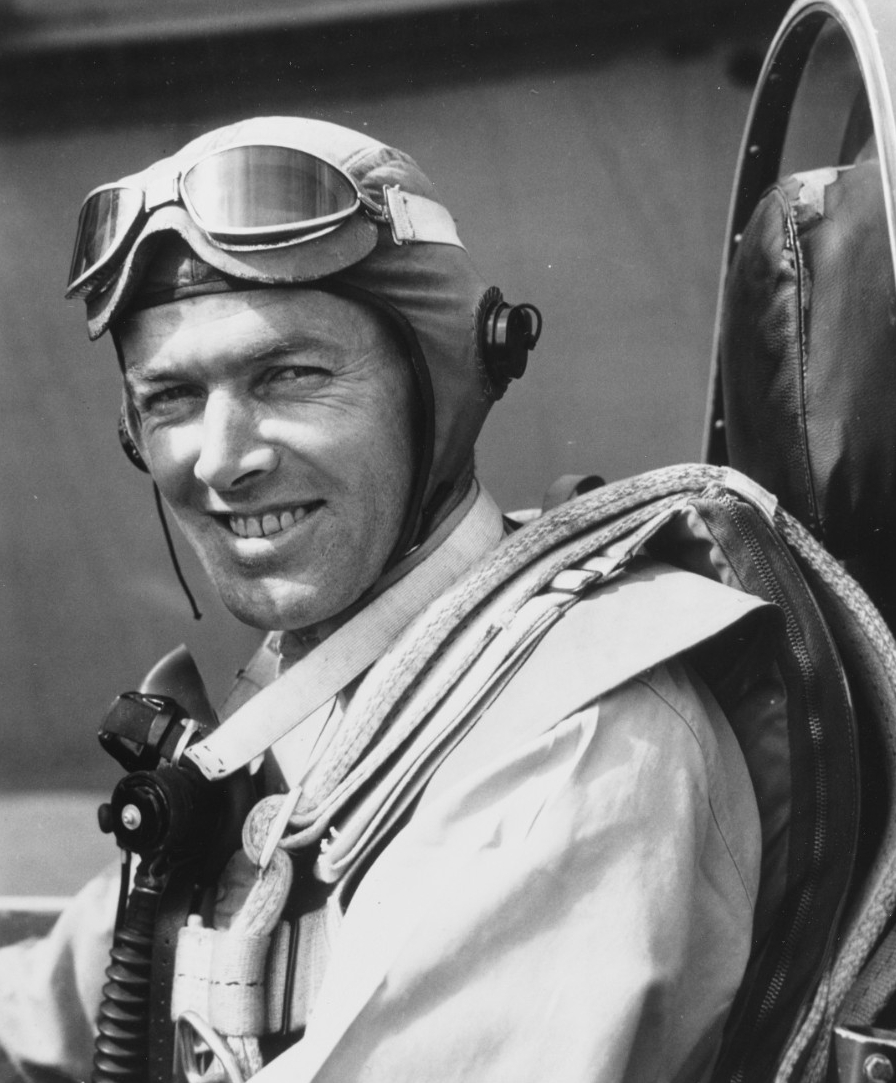 James Henry Flatley was born on 17 June 1906, at Green Bay, Wisconsin, son of James H. and Joan (Nash) Flatley. He attended St. Norbert's College, West DePere, Wisconsin, before his appointment to the US Naval Academy, Annapolis, Maryland, from the Ninth District of his native state in 1925. As a Midshipman he was Manager of the football team, and was a member of the boxing squad. Graduated and commissioned Ensign on 6 June 1929, he subsequently advanced in rank, attaining that of Captain to date from 30 March 1945. On 26 July 1957 his selection for the rank of Rear Admiral was approved by the President, his date of rank 1 December 1957.

Following graduation from the Naval Academy in 1929, he reported as a junior officer on board the USS Saratoga, and in April 1930 was detached for flight training at the Naval Air Station, Pensacola, Florida. Designated Naval Aviator on 23 April 1931, he remained at Pensacola until May of that year, and the next month joining Fighting Squadron Five, attached to Aircraft Squadrons, Battle Fleet (based on board the USS Lexington). In June 1934 he was assigned to Patrol Squadron Four attached to the Naval Air Station, Pearl Harbor, Territory of Hawaii, and from June 1936 until October 1937 had consecutive duty with Fighting Squadrons Four and Six, based aboard the USS Ranger and USS Enterprise respectively. In September 1937 he reported on board the USS Omaha, to serve as her senior aviator, in Mediterranean Squadron 40-T.

In July 1939 he returned to the US for duty at the Naval Air Station, Pensacola, where he was Flight Instructor at the Naval Air Advanced Training Command. Between December 1940 and September 1941, he was Aide to the Commanding Officer of the Naval Air Station, Jacksonville, Florida, after which he was ordered to duty afloat as Executive Officer of Fighting Squadron TWO (the Navy's "White Hat" Squadron made up of enlisted aviation pilots) based on board the USS Lexington, and from April 1942, on board the USS Yorktown with VF-42.

Navy Cross: "For extraordinary heroism and conspicuous courage...(in the latter assignment), in action against enemy Japanese forces in the Battle of the Coral Sea on May 7 and 8, 1942. As leader of the fighting escort of our own planes attacking an enemy Japanese carrier on May 7, Lieutenant Commander Flatley fearlessly engaged fighters, destroying one and assisting in the destruction of another with no loss to his escort group. That evening, he led a seven plane division on combat air patrol in a fierce attack and resultant dispersal of a formation of enemy scouting planes, assisting in the destruction of two of them. On May 8, fighting persistently and at great odds, he again lead a division of the combat air patrol in a courageous attack against enemy aircraft attacking our surface forces and destroyed an enemy fighter harassing our anti-torpedo plane patrol and assisted in the destruction of two others. On all these occasions, Lieutenant Commander Flatley displayed the highest qualities of leadership, aggressiveness and complete disregard for his own personal safety.

He is also entitled to the Ribbon for and a facsimile of the Presidential Unit Citation awarded the USS Lexington.After the Battle of Coral Sea he commissioned and trained Fighting Squadron Ten (the famous "Grim Reapers") and in October 1942 the squadron reported on board the USS Enterprise. They contributed to the "Big E's" days of glory, when alone among carriers, the Enterprise helped hold the battered line in the South Pacific. They participated in the Battles of Santa Cruz, Guadalcanal and Rennell Island and even went ashore at Guadalcanal to aid the hard-pressed Marines by operating their planes off Henderson Field when the fight looked darkest. For services as Commanding Officer of Fighting Squadron Ten, he was awarded the Distinguished Flying Cross and Gold Star in lieu of the Second Distinguished Flying Cross. The citations follow:

Distinguished Flying Cross: "For heroism and extraordinary achievement...while engaged with enemy Japanese naval forces in the Solomon Islands Area during the period from November 13 to 15, 1942. In the face of heavy anti-aircraft fire and enemy fighter opposition, (he) repeatedly led his squadron against Japanese surface and air forces to destroy at least ten enemy aircraft and inflict heavy damage by strafing enemy combatant ships, transports, and shore installations. His outstanding leadership, great courage, and resolute determination were an inspiration to his command..."

Gold Star in lieu of a Second Distinguished Flying Cross: "For heroism and extraordinary achievement... during action against enemy Japanese forces in the Solomons Islands Area, January 30, 1943. While leading a combat air patrol, (he) sighted a formation of twelve Japanese torpedo planes maneuvering for position to attack one of our cruisers. Immediately he led his section into the attack and, pursuing the hostile aircraft through the antiaircraft barrage, shot down one large enemy torpedo bomber and damaged another which was subsequently dispatched by one of his wing mates..."

He is entitled to the Ribbons and facsimiles of the Presidential Unit Citation awarded the USS Enterprise and a similar award given to the First Marine Division, Reinforced.

Detached from command of Fighting Squadron Ten, in February 1943, he returned to the United States and had temporary duty with the Fleet Air Command, West Coast, followed by duty with fitting out the Air Group Five to be attached to the new USS Yorktown. He assumed command of that Air Group, upon the commissioning of the Yorktown on 7 April 1943, and served in that command until September of that year. It was during this period that "The Fighting Lady" documentary was filmed aboard the Yorktown.

"For heroism and extraordinary achievement...in action against enemy Japanese forces on Marcus Island, August 31, 1943..." he was awarded the Air Medal, later recalled in lieu of the Third DFC. The citation further states in part:

"Exercising forceful leadership and tireless effort, Commander Flatley trained his air group efficiently and expeditiously prior to the actual operations and, subsequently effecting an extremely hazardous night take-off, promptly rendezvoused his planes and proceeded with his group to the objective, delivering the first attack before dawn. Later the same day, he accomplished another flight attack and again participated in a daring bombing and strafing raid on this important island. Commander Flatley's superb airmanship, aggressive fighting spirit and valiant devotion to duty contributed materially to the success of these vital missions..."

Legion of Merit: "For exeptionally meritorious conduct...as Operations Officer on the Staff of Commander First Carrier Task Force, Pacific, from December 6, 1944 through May 28, 1945...Captain Flatley planned and conducted air operations in support of amphibious landings for the conquest of Iwo Jima and Okinawa strikes against Tokyo, the Kure Naval Base and Kyushu, support missions in the vicinity of our landings and an air attack on major units of the Japanese Fleet on April 7, 1945. When hits on the flagship by suicide bombers required the Task Force Commander to shift his flag, Captain Flatley swiftly re-established control of operations and expertly carried out his assignment during a protracted series of bitterly fought air engagements..."

Letter of Commendation: "For distinguishing himself by meritorious service...on May 11, 1945. When the ship on which he was embarked was hit by two enemy aircraft, he voluntarily led parties below decks to rescue personnel who had been overcome in the smoke filled compartments..."

He was awarded the Ribbon for and facsimile of the Presidential Unit Citation awarded the USS Bunker Hill.

In June 1945 he returned to duty on the Staff of Commander, Fleet Air, West Coast, and served in that assignment until July 1945, after which he was assigned until September 1945 to Staff of Commander in Chief, US Pacific Fleet, as Aviation Plans Officer. He had temporary duty as liaison officer, Far Eastern Air Force, during the occupation of Japan. In October 1945 he became Director of Training at the Naval Air Basic Training Command, Corpus Christi, Texas. He was a student at the Air War College, Maxwell Air Force Base, Montgomery, Alabama, from July 1947 until July 1948, then joined the Staff of Commander, Air Force, US Atlantic Fleet, as a Assistant Chief of Staff for Operations, Plans, and Training.

In July 1950 he reported as Commanding Officer of the Naval Air Station, Olathe, Kansas, and in July 1952 assumed command of the USS Block Island. During his command Block Island won the Battle Efficiency pennant for ships of her class. Detached from command of that aircraft carrier escort in July 1953, his next duty was as Officer in Charge of Naval Aviation Safety Activity, Norfolk, Virginia. In October 1953 he became Commander Naval Air Bases, Fifth Naval District and Commander Naval Air Station, Norfolk, Virginia. In June 1955 he was ordered as Commanding Officer of the USS Lake Champlain. This ship also won the Battle Efficiency pennant under his command. In July 1956, he moved to the Office of the Chief of Naval Operations as Head of the Special Weapons Plans Branch, Strategic Plans Division, and on 21 October 1957, became Director, Air Warfare Division. He was transferred to the Retired List of the US Navy, effective 2 June 1958 and was advanced to the rank of Vice Admiral on the basis of combat awards. He died at the US Naval Hospital, Bethesda, Maryland, on 9 July 1958.

"Exercising outstanding professional ability and inspiring leadership throughout this period, Vice Admiral Flatley skillfully carried out his varied and exacting assignments. As Officer in Charge, US Naval Aviation Safety Activity and later, Commander, US Naval Air Bases, Fifth District, he administered the responsibilities of his command with astute judgment and foresight. A strong advocate and a relentless worker in support of aviation safety, he developed sound aviation training programs producing results which will remain forever an integral part of the evolution of naval aviation. As Commanding Officer of two aircraft carriers, the USS Block Island (CVE-106) and, later, the USS Lake Champlain (CVE-39), (he) succeeded in winning two highly coveted Battle "E" pennants. In July 1956, he moved to the office of the Chief of Naval Operations as Head, Special Weapons Plans Branch, Strategic Plans Division; and, in October 1957, he became Director, Air Warfare Division. In both these positions, he displayed broad capability and sound judgment in planning, coordinating, and directing the development of improved aviation weapons systems, thus assuring greater readiness of naval combatant forces. Throughout his entire naval career, he has contributed, by his understanding, experience, advice and example, to the moral standards of the Navy. During the later months of 1957 and the early months of 1958, his advice concerning the Navy's moral leadership program was frequently sought and used..."

He was survived by his wife, the former Dorothy McMurray of Bartow, Florida, and four sons.