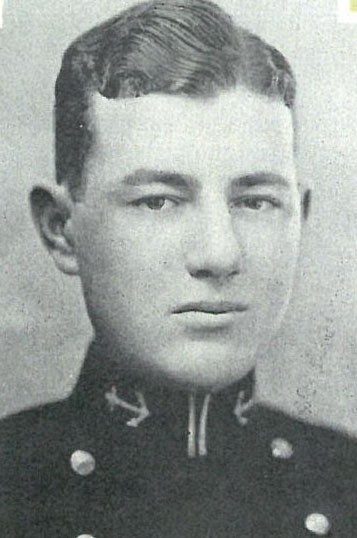 John Bailey was born on October 11, 1904, in Gatesville, Texas, the son of Dr. Ralph Bailey and Mrs. (Lucy Bone) Bailey. He attended the Agricultural and Mechanical College of Texas at College Station, before his appointment to the US Naval Academy, Annapolis, Maryland, from the Eleventh District of his native state in 1923. Graduated and commissioned Ensign on June 2, 1927, he subsequently attained the rank of Captain to date from March 20, 1945.

Following graduation from the Naval Academy in 1927, he remained there until August 1927 for the summer course in aviation, after which he joined USS Idaho, a unit of Division FOUR, Battleship Divisions, Battle Fleet. Detached from the Idaho in May 1928, he had consecutive duty in the destroyers Chase and Melvin, operating with Destroyer Squadron TWELVE, Battle Fleet. In March 1929 he returned to the United States for instruction at the Naval Air Station, Pensacola, Florida. In July 1929 he joined USS Eagle 35, a unit of Submarine Division, Control Force, and in July 1930, after taking passage in USS Chaumont, joined USS Ramapo, operating with the Naval Transport Service. He transferred in June 1931 to USS Texas, flagship of the US Fleet and later flagship of Battleship Division ONE, Battle Force. Detached from the Texas in May 1935 he returned to the United States for duty in the Bureau of Navigation, Navy Department, Washington, DC, until February 1937.

In April 1937 he was assigned to USS Monocacy on Yangtze Patrol, and while aboard was present during the Japanese bombing of Hankov and Kuikiang, China. For a year, from October 1938 to October 1939, he was hospitalized, and thereafter until August 1941 served in USS Portland. After duty in the Office of the Chief of Naval Operations, Navy Department, he reported to Headquarters, Commander in Chief US Fleet, Navy Department.

He joined USS Richmond as Executive Officer in December 1943. The mission of that cruiser was to destroy enemy installations in the Kuriles. The first blow of this phase was struck on February 4, 1944, when the Richmond, with other surface units, bombarded the Northern Kuriles for the first time in the war. The target was the Japanese base at Kurabu Zaki on Paramushiro’s southern extremity. Several fires and large explosion were observed as a result of the bombardment.

The first penetration of the Okhotsk Sea during the war by naval surface units was made by the Richmond and other units of the task force on March 4, 1944. The invasion was accomplished without the presence of out ships being detected. From the entrance point through the Kurile chain the task force proceeded westward across the across the Japanese shipping lanes between Hokkaido and Paramushiro, then turned and scouted northwest. Later they turned southward again for a second sweep down the chain before retiring homeward.

Detached from the Richmond, and following another period of hospitalization, July-December 1944, he was assigned to the staff of the Commander Task Force ONE HUNDRED AND TWENTY FOUR. He became Chief of Staff and Aide in May 1945, continuing to serve with that Task Force until March 1946. He then transferred to the staff of Commander Task Force SIXTY FOUR, and in November 1946 reported as Executive Officer of the Naval Ammunition Depot, Hawthorne, Nevada. He had duty there for two years, before he assumed command of USS Mattaponi.

Detached from command of the Mattaponi in December 1949, he was assigned to the Military Sea Transportation Service, as Head of the Passenger and Transport Division, Navy Department, where he continued to serve until November 1950. He was Commanding Officer of the Military Sea Transportation Office, San Juan, Puerto Rico, and in September 1952 became Professor of Naval Science, Naval Reserve Officers Training Corps Unit, University of Colorado at Boulder.