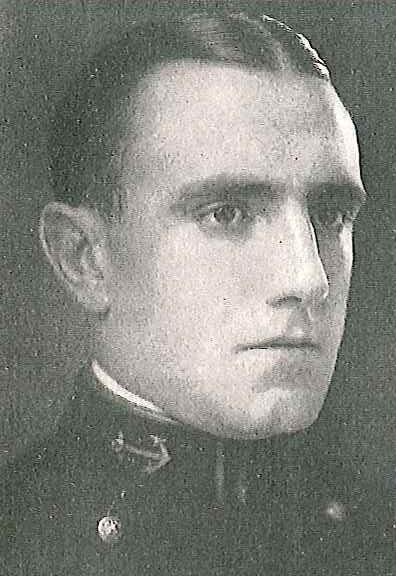 Joseph Malcolm Carson was born in Enniskillen, Ulster County, Ireland, on June 22, 1901, son of Joseph Lougheed Carson and Mrs. Jeanie McNeal Carson. He attended Front Royal, Virginia High School and the Army-Navy Preparatory School, Washington, DC, prior to his appointment to the US Naval Academy, Annapolis, a member of the football “B” squad, and the varsity wrestling squad, and won his letter in lacrosse in 1925. Graduated and commissioned Ensign on June 4, 1925, he subsequently attained the rank of Captain, to date from July 20, 1943. He was selected and approved for temporary promotion to the grade of Rear Admiral in the Navy in July 1952, to date from June 1, 1953.

After graduation from the Naval Academy in June 1925, he served successively for two years in USS Texas, USS Oklahoma, and USS Argonne. In July 1927 he reported to the Naval Air Station, Pensacola, Florida, for flight training, and completing the course was designated Naval Aviator in May 1928. From June of that year until May 1930, he served with Fighting Squadron 3, based on the aircraft carrier Lexington, operating with Aircraft Squadrons, Battle Fleet. He then served for two years in the training divisions and the year following in the experimental division of the Naval Air Station, Norfolk, Virginia.

In June 1933 he joined Observation Squadron 1, aviation unit of the USS Texas, and two years later was transferred to duty with Scouting Squadron 1, based on USS Ranger. Detached from the latter squadron in June 1936, he served for two years at the Naval Air station, Anacostia, DC he returned to sea in June 1938 in command of USS Avocet, and in July 1940 was designated Command Cruiser Scouting Squadron 4 (and later 5), attached to USS Northampton.

He assumed command of the Naval Reserve Aviation Base, Anacostia, DC, in September 1941, and served in that command during the early period of World War II. In May 1943 he joined USS Bunker Hill as Air Officer, and in January 1944 became Executive Officer of that carrier. He is entitled to a facsimile of, and the ribbon for, the Presidential Unit Citation of the USS Bunker Hill, awarded for “extraordinary heroism in action against enemy Japanese forces in the air, ashore and afloat in the South, Central, Southwest and Western pacific, from November 11, 1943 to May 11, 1945...”

He was awarded the Bronze Star Medal with Combat “V,” and cited in part as follows: “For meritorious service as Air Officer and later as Executive Officer of the USS Bunker Hill during operations against enemy Japanese forces in the Pacific Ocean Area from May 25, 1943 to May 1944… Participating in strikes against Nauru, the hostile stronghold at Rabaul, and the Japanese base at Kavieng; the siege and capture of the Gilbert Islands; and the capture and occupation of Kwajalein Atoll, Marshall Islands, he skillfully directed air operations with the result that his ship was not damaged during the many Japanese air attacks, while great damage was inflicted on the enemy by the Bunker Hill aircraft in the air, ashore and afloat…”

Detached from the Bunker Hill in May 1944, he reported for duty on the staff of Commander Carrier Division 22, USS Sangamon, flagship. He was awarded the Navy Cross “For extraordinary heroism as Chief of Staff for Carrier Task Group 77.4 in action against enemy Japanese forces in the Battle for Leyte Gulf, on October 24, 1944…” The citation continues: “An alert and aggressive leader, Captain Carson zealously directed complex operations against the enemy in the face of constant attack from hostile aircraft, thereby contributing to the destruction of a large portion of the enemy force. His cool courage, inspiring leadership and unwavering devotion to duty under fore were important factors in the success of a vital mission…”

He is also entitled to the ribbon for and a facsimile of the Presidential Unit Citation awarded the USS Sangamon.

He assumed command in January 1945 of the Naval Air Station, Glenview, Illinois, with additional duty with the Naval Air Bases, Ninth Naval District. Detached two years later, he went to sea in April 1947 in command of USS Salerono Bay, and in September of that year was transferred to command of USS Mindoro. On May 20, 1948 he was ordered to duty as Chief of Staff and Aide to Commander Carrier Division On. After a year in that duty, including a Mediterranean cruise, he was detached to report to the Office of the Chief of Naval Operations, Navy Department, Washington, DC, and soon thereafter assumed command of Fleet Air Wing 6. He received a Letter of Commendation, with authorization to wear the Commendation Ribbon, from the Commander Naval Forces, Far East, as follows:

“For outstanding performance of duty as Commander, Fleet Air Wing 6 from August 29 to October 8, 1950… Assuming command of Fleet Air Wing 6 soon after it was commissioned, Captain Carson quickly and efficiently brought its staff to a high degree of competency and so coordinated and directed the training and operations of these squadrons and ships under his control that they were able to carry out their mission with increasing success… During the course of naval operations taking place in conjunction with the Korean War, especially in connection with Inchon landing, squadrons under his command rendered invaluable service in anti-submarine patrol, anti-mine patrol, and search and rescue missions…”

In October 1950 he assumed command of USS Valley Forge, and for “exceptionally meritorious conduct in the performance of outstanding service as Commanding Officer (of that aircraft carrier) during operations against the enemy in the Korean Theater from October 10, 1950 until March 22, 1951…” he was awarded the Legion of Merit with Combat “V,”

“Exercising outstanding leadership and foresightedness throughout, Rear Admiral Carson discharged his many responsibilities with sound judgment and skillfully directed the support operations which kept the naval air forces in action against the enemy during the latter part of the Korean conflict and in instant readiness during the uneasy period after the signing of the truce agreement. In executing his command functions, he displayed professional acumen and experience in all fields of naval warfare. By his tireless devotion to the fulfillment of exacting assignments, Rear Admiral Carson contributed materially to the success of the United States naval operations in the Far East…”

In April 1955 he reported as Chief of Staff and Aide to Commander Air Force, US Pacific Fleet, and on March 15, 1957 became Commander Carrier Division Seven. He continued to serve in that capacity until January 1958, when he assumed duty as Chief of Naval Basic Training, with headquarters at the Naval Air Station, Pensacola, Florida. He was Commander Naval Forces, Philippines with additional duty as Commander in Chief Pacific Representative, Philippines, from October 27, 1959 until June 1961 when he was assigned as Commander Fleet Air, Jacksonville, with headquarters at the Naval Air Station, Jacksonville, Florida, with additional duty as Commander Naval Air Bases, Sixth Naval District.