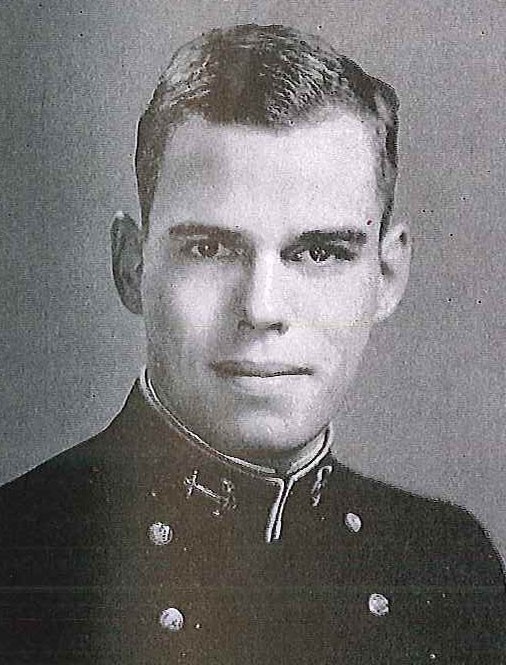 William Guy Eaton was born in Charleston, South Carolina, on March 26, 1922, son of Mrs. (Edna S. Smith) Eaton ad the late Commander William G. Eaton, USN. In May 1940 he enlisted as a Seaman in the US Naval Reserve, and in July 1941 was honorably discharged to enter the US Naval Academy, Annapolis, Maryland, on appointment by the Secretary of the Navy. Graduated and commissioned Ensign on June 7, 1944, with the Class of 1945 (course reduced to three years due to World War II), he progressed periodically in rank to that of Lieutenant Commander, to date from September 1, 1955.

Following graduation from the Naval Academy in 1944, he served briefly as a Technical Observer at the Naval Air Station, Jacksonville, Florida. In August 1944 he joined USS Marshall as Assistant Gunnery Officer, and in that capacity saw action during operations in the Western Carolines and at Leyte and Luzon. When USS Franklin was hit by a horizontal bomber off Kyushu, Japan, on March 19, 1945, USS Marshall aided in the rescue of survivors and escorted the aircraft carrier from the combat area.

Detached from the Marshall in September 1945, he joined USS Blue to serve as Gunnery Officer, Navigator and First Lieutenant. He remained on board that destroyer, operating with the SEVENTH Fleet on Korean patrol, until March 1947, and from April of that year until April of the next was Executive Officer of USS EPCE(R) 855. He next had flight training at the Naval Air Station, Pensacola, Florida and Corpus Christi, Texas, and on September 16, 1949, was designated Naval Aviator. He had further training with Fleet Airborne Electronics Training Unit, Atlantic, and in December 1949 was assigned as Communications Officer of Patrol Squadron TWENTY-ONE.

Between April 1952 and June 1954 he was an Instructor with the Naval Reserve Officers Training Corps Unit at the University of South Carolina at Columbia, after which he had duty as Personnel Officer of Patrol Squadron FORTY-FIVE. Transferred to Fleet Aircraft Service Squadron ONE HUNDRED TWENTY-ONE, he served as Operations Officer until August 1957, then reported for instruction in nuclear engineering at the Naval Postgraduate School, Monterey, California. In June 1959 he joined the staff of Commander Task Group SEVEN POINT THREE as Liaison Officer to the Chief of Naval Operations.