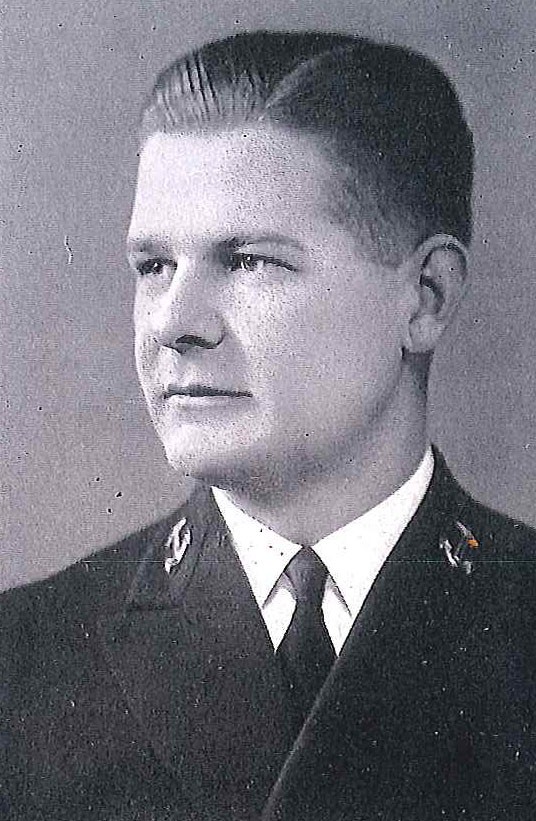 Arthur Henry Berndtson was born in San Francisco, California, on December 2, 1917, son of the late Commodore Charles Arthur Berndtson of the Matson Line and Mrs. Berndtson. He attended University High School, Oakland, California, and Drew School in San Francisco, prior to entering the US Naval Academy, Annapolis, Maryland, on appointment from his native state in June 1936. Graduated and commissioned Ensign, on June 6, 1940, he subsequently advanced in rank, to that of Captain, to date from July 1, 1959.

After graduation from the Naval Academy in 1940, he was assigned as a Gunnery Division Officer in the aircraft carrier Enterprise, in which he served during the carrier task force raids on the Marshall, Wake, and Marcus Islands. These raids were followed by the Battle of Midway, the Guadalcanal Landing, and the Battle of the Eastern Solomons. He is entitled to the Ribbon for the First Presidential Unit Citation awarded the USS Enterprise. Detached from the Enterprise in August 1942, he reported as Executive Officer of Motor Torpedo Boat Squadron TEN on commissioning at New York, New York, and subsequently operated in the Solomon Islands area.

“For conspicuous gallantry and intrepidity in action as Division Leader of a Motor Torpedo Boat Squadron, operating against enemy Japanese forces during the New Georgia Campaign in the Solomon Islands area in 1943…” he was awarded the Silver Star Medal.

In September 1944, he returned to the United States and was Executive Officer, and also Commanding Officer of Motor Torpedo Boat Squadron FOUR, the training squadron, at Newport, Rhode Island. Detached in May 1945, he next served as Executive Officer of USS Massey (DD-778), which participated in the operations in the Philippines and Okinawa areas, and after the cessation of hostilities, in the occupation of Japan. In February 1946 he assumed command of USS Hambleton (DMS-20), operating in the Atlantic area, and in September 1946 reported for postgraduate training at George Washington University Law School, Washington, DC, from which he received the degree of Bachelor of Laws in June 1949.

After completing his law course, he next served as Flag Secretary and Aide to Commander Cruiser Division THREE in the Pacific, embarked successively in USS Helena and USS Toledo during the Korean action. He was awarded the Navy Commendation Medal with Combat “V,” for “exceptionally meritorious service in the performance of outstanding duties to the Government of the United States as Flag Secretary on the Staff of Commander Japan-Korea Support Group and later Korean TWO Blockade Group from July 26, 1950 to October 23, 1950…”

In May 1951, he assumed command of USS Stickell (DD-888), and returned to the Korean Combat zone. He was awarded a Gold Star in lieu of the Second Bronze Star Medal with Combat “V,” “for meritorious service as Commanding Officer of the USS Stickell during operations against enemy aggressor forces in Korea from February 19, to August 10, 1952…”

From January 1953 until April 1955 he performed legal duties in the Legal Office of the Twelfth Naval District, with headquarters in San Francisco, California, after which he served until May 1957 as Fleet Schools Officer on the Staff of Commander Training Command, US Pacific Fleet, in San Diego. Returning to sea, he was Executive Officer of USS Toledo (CA-133), a Regulus equipped heavy cruiser, until July 1958. Ordered to the Bureau of Naval Personnel, Navy Department, Washington, DC, he served first as Head, Enlisted Training Branch, and later as Director, Training Management Division until August 1960, when he reported as a student at the Industrial College of the Armed Forces, Washington, DC. Completing the course in June 1961, he commanded USS Oglethorpe (AKA-100) until July 1962. He then reported for duty in the Office of the Chairman of the Joint Chiefs of Staff, Washington, DC, where he served as a military assistant to General Lyman L. Lemnitzer, Maxwell D. Taylor, and Earle G. Wheeler, in succession. In August 1965, he became Commander Amphibious Squadron Six and in August 1966 was ordered detached for duty with the Bureau of Naval Personnel, Navy Department.

Captain Berndtson is a member of the District of Columbia Bar.