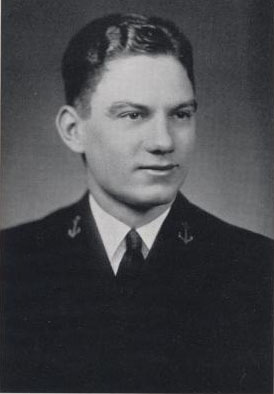 John Sterett Crittenden Gabbert was born in Lewisport, Kentucky, on 1 December 1911, son of Roy F. and Haddie Sterett Gabbert. He was graduated from Owensboro High School, Owensboro, Kentucky, and had a year at the University of Kentucky before entering the US Naval Academy, Annapolis, Maryland, as a Midshipman from Kentucky on 7 July 1931. He was graduated with the degree of Bachelor of Science and commissioned Ensign in the US Navy on 6 June 1935, and through subsequent advancement attained the rank of Captain, to date from 1 July 1954.

After graduation from the Naval Academy he was assigned to the USS Idaho (BB-42) in which he had gunnery, engineering and communications duties as a junior officer from July 1935 until December 1938. In February 1939 he joined the USS Pecos (AO-6), flagship of the Asiatic Auxiliary Fleet, and served as that ship's Gunnery and Communications Officer until assigned as Gunnery Officer of the USS Alden (DD-211), in December 1939. At the outbreak of World War II in December 1941, he participated in a minor surface night engagement in Bali Straight, and subsequently in the major surface engagement, the Battle of the Java Sea. The USS Alden was one of the four US destroyers which survived the battle, of the original fifteen Allied ships.

As Executive Officer of the USS Abbott (DD-629) in February and March 1943, he participated in the Invasion of the Marshall Islands. In April, that year, he assumed command of the USS Bell (DD-587), which operated with Fast Carrier Task Force 58. USS Bell, under his command, took part in raids on Truk, Ponape, Ulithi, Palau, Guam, Saipan, and action at Iwo Jima, Okinawa, the Philippine Islands, Morotai, and Formosa. She participated in the Battle of the Philippine Sea and the Battle of Leyte Gulf, and assisted in sinking one Japanese submarine and in destroying three Japanese planes. He was awarded the Silver Star Medal and the Bronze Star Medal with Combat "V," and the following citations:

Silver Star Medal: "For conspicuous gallantry and intrepidity as Commanding Officer of the USS Bell, operating in enemy Japanese-controlled waters, from October 13 to 17, 1944. With his vessel assigned as a screening unit to a task group protecting the withdrawal of two severely damaged ships under tow, Commander Gabbert directed the transfer of personnel from other ships during an enemy air attack and, despite adverse weather conditions, completed the rescue and contributed materially to the successful accomplishment of the salvage mission..."

Bronze Star Medal, Combat "V": "For meritorious achievement as Commanding Officer of the USS Bell during action against enemy Japanese forces in the Pacific Ocean Area, on January 31, 1945. When his ship was ordered to proceed to the scene of an enemy submarine contact, Commander Gabbert skillfully maneuvered to close the hostile craft and deliver two depth-charge barrages before other vessels arrived to make continuous coordinated attacks. By his sound judgment and leadership, (he) contributed materially to the probable destruction of the submarine as evidenced by several heavy underwater explosions, the odor of burned powder and loss of sonar contact..."

He also received a Letter of Commendation, with Ribbon and Combat "V," from the Commander in Chief, US Pacific Fleet, as follows: "For distinguishing himself by meritorious achievement as Commanding Officer of a United States Destroyer in Central Pacific Waters in connection with operations against the enemy from 6 May 1944 to 6 August 1944. During this period his ship participated in carrier strikes on the Marianas and Bonin Islands; contributed substantially to the rescue of our aviators after the air attack of important units of the enemy fleet; and assisted in the day bombing of the Bonin Islands..."

Detached from command of the USS Bell in April 1945, he returned to the United States, and during the latter months of the war, and until June 1948, served in the Bureau of Naval Personnel, Navy Department, Washington, DC, attached to the Separation Activity. From August 1948 until June 1950, he was at sea as Commander LSR Division 11, and the last fourteen months of that period, he also served as Chief Staff Officer to the Commander Tractor Squadron. The next year he served as Gunnery, Training, and Readiness Officer on the Staff of Commander Amphibious Force, Pacific Fleet, returning to the United States in July 1951, after taking part in a commando raid on East Coast Korea in April.

From August 1951 until June 1952 he was a student (Strategy and Tactics) at the Naval War College, Newport, Rhode Island, after which he returned to the Navy Department for a second tour of duty in the Bureau of Naval Personnel, serving this time as Head of the Enlisted Discipline Section. In August 1954 he assumed command of Destroyer Division 92, being promoted to Captain in October of that year. On 23 August 1955, he was ordered detached and to duty as Chief of Staff and Aide and Operations Officer to Commander Cruiser Division 5, and later had similar duty on the Staff of Commander Striking and Support Forces, Southern Europe. On 8 September 1958, he was ordered to duty as Commanding Officer of the USS Rankin (AKA-103).