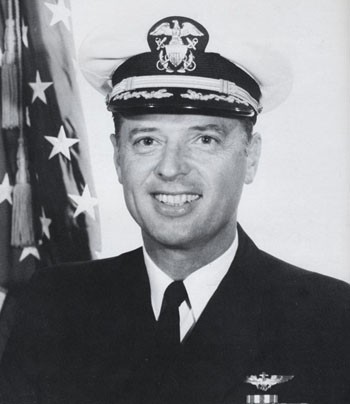 Ernest Eugene Tissot is the son of Ernest E. and Beulah Louise (Rehkopf) Tissot. He graduated from North Hollywood (California) High School and on 2 July 1945 enlisted in the US Naval Reserve. Under the V-12 Program, he attended Occidental College, Los Angeles, California; California Institute of Technology at Pasadena and the University of Southern California at Los Angeles and from October 1946 to March 1947 had preflight training at the Naval Air Station, Ottumwa, Iowa. As an Aviation Midshipman, he had flight training at several naval air facilities, including the Naval Air Station, Pensacola, Florida. He was designated a Naval Aviator on 10 June 1948, and was commissioned Ensign in December of that year. He was subsequently advanced in rank to that of Captain, to date from 1 January 1969. His selection for the rank of Rear Admiral was approved by the President on 28 March 1973.

After receiving his commission in 1948, he joined Fighter Squadron ONE HUNDRED NINETY-TWO and while serving with that squadron, operating from the USS Princeton (CV-37), participated in the Korean area of hostilities. "For meritorious achievement...during operations against enemy aggressor force in Korea..." he was awarded the Air Medal with Gold Stars in lieu of the Second and Third similar awards. He is also entitled to the Ribbon for, and a facsimile of the Navy Unit Commendation awarded the USS Princeton. From July 1951 to July 1953 he was an Advanced Flight Instructor with Advanced Training Unit THREE HUNDRED, after which he served as Aviator and Maintenance Officer of Fighter Squadron THIRTY-THREE.

In April 1956 he reported for postgraduate instruction at Stanford (California) University, from which he received the degree of Bachelor of Science in Engineering in March 1958. He continued instruction at the Naval Postgraduate School, Monterey, California, receiving his Master of Science Degree in Aeronautical Engineering in July 1960. He next served as Operations Officer with Carrier Air Group EIGHT and from February to July 1963 attended the Armed Forces Staff College, Norfolk, Virginia.

After completing a period of training while attached to Attack Squadron ONE HUNDRED TWENTY-FIVE, he reported in November 1963 as Executive Officer of Attack Squadron ONE HUNDRED NINETY-TWO and assumed command of that squadron, operating from the USS Bon Homme Richard (CVA-31), in December 1964. He was awarded the Distinguished Flying Cross and a Gold Star in lieu of the Second Distinguished Flying Cross. The citations follow in part:

Distinguished Flying Cross: "...in an Air Wing strike against Dong Phong Thuong Bridge in North Vietnam (on June 1, 1965) (he)...was to attack the extremely narrow and heavily defended bridge with a Bullpup "B" missile... He Guided his missile to a direct hit on the bridge which weakened the structure and allowed a subsequent hit to collapse a span into the river..."

Gold Star in lieu of the Second Distinguished Flying Cross: "...During the period May 26 through December 1, 1965...(he) led elements of his squadron in eight major air strikes against heavily defended primary targets of great military importance in North Vietnam... He contributed greatly to the success of these combat flights, which destroyed over 285 buildings, damaged over 250 buildings, destroyed 13 sampans and junks and accounted for at least 175 enemy dead..."

He was also awarded Gold Stars in lieu of the Fourth through the Fifteenth Air Medals "for meritorious achievement on aerial flight in Southeast Asia from September 24, 1964 to November 17, 1965..."

In January 1966 he joined the Staff of Commander Naval Air Force, US Pacific Fleet as Attack Squadron Training Officer and in September 1966 was assigned to Ready Attack Carrier Air Wing TWELVE as a Prospective Carrier Air Wing Commander. In January 1967 he assumed command of Attack Carrier Air Wing FOURTEEN, which, embarked on the USS Constellation (CVA-64), participated in operations in the Vietnam area. For outstanding services while in command of that air wing, he was awarded the Silver Star Medal, a Gold Star in lieu of the Second Silver Star Medal, the Legion of Merit with Combat "V," Gold Stars in lieu of the Third, Fourth and Fifth Distinguished Flying Crosses, the Navy Commendation Medal, Gold Stars in lieu of the Second, Third, Fourth and Fifth Navy Commendation Medals with Combat "V" and twelve additional Air Medals. Citations follow for the three highest awards.

Silver Star Meal: "...As strike leader of a daring and extremely hazardous major coordinated air wing strike against the enemy's valuable army barracks and missile storage complex at Ban Yen Nhan, eleven miles southeast of Hanoi, North Vietnam...(on July 8, 1967)... All aircraft completed the dangerous mission without a single plane being hit by enemy fire. (His) own bombs detonated precisely on his aim point, leaving a large building totally destroyed and nearby missile canisters in flames..."

Gold Star in lieu of the Second Silver Star Medal: "...while leading a major air wing strike on October 26, 1967 against the heavily defended Van Dien vehicle storage and repair depot adjacent to the North Vietnamese capital of Hanoi... The effectiveness of the attack and the courageous leadership in the face of extremely hazardous and formidable opposition shown by Commander Tissot ensured the successful execution of a most demanding mission..."

Legion of Merit: "...His keen foresight in the development of highly effective air wing coordinated strike tactics enabled the wing to meet the unprecedented demands of increased operations in the extremely heavily defended Northeast Sector of South Vietnam. Over one hundred coordinated air wing strikes against every major assigned target in this sector were conducted by Air Wing FOURTEEN. In personally leading twenty-three of these major strikes, he inspired the wing pilots to achieve devastating results against the enemy with minimum losses to the assigned forces..."

He is also entitled to the Ribbon for, and a facsimile of the Navy Unit Commendation awarded the USS Constellation and Attack Carrier Air Wing FOURTEEN.

From March 1968 to February 1969, he was Assistant for Tactical Aircraft in the Aviation Plans Branch, Office of the Naval Operations, Navy Department, Washington, DC, after which he attended the Naval Nuclear Power School, Bainbridge, Maryland. He reported in September 1969 for further training at the Nuclear Power Training Unit, Idaho Falls, Idaho and in April 1970 was assigned to the Naval Amphibious base, Coronado, California, for amphibious orientation. In June 1970 he assumed command of the USS Thomaston (LSD-28) and in April 1971 transferred to command of the USS Enterprise (CVAN-65). In April 1974 he was ordered detached for duty as Assistant Director (Strategic and Support Systems Test and Evaluation) in the Office of the Director of Defense Research and Engineering, Washington, DC.

He is married to the former Mildred Ellen Patton of Oakland, California and they have two sons. Rear Admiral Tissot retired from naval service in May 1981.