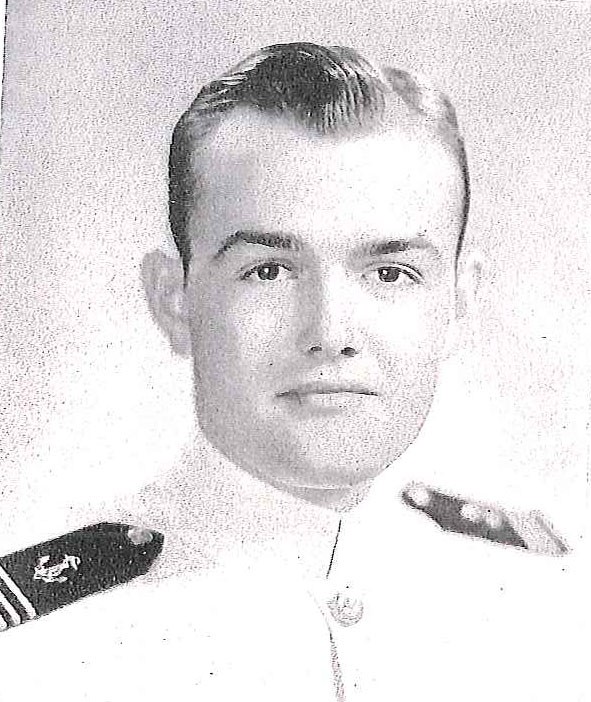 Albert Pinson Carpenter was born in Honea Path, South Carolina, on April 14, 1920, son of Robert Henry and Corrie (Pinson Carpenter, both now deceased. He attended Technical High School, and the Georgia School of Technology, both in Atlanta, prior to entering the US Naval Academy, Annapolis, Maryland, on appointment from the State of Georgia in 1940. Graduated with the Class of 1944 on June 9, 1943 (course of instruction reduced to three years due to World War II) and commissioned Ensign, he subsequently advanced in rank, attaining that of Captain, to date from September 1, 1963.

Following graduation from the Naval Academy in 1943, his first assignment afloat was on board USS Sigsbee, in which he served throughout World War II and until December 1945. While attached to that destroyer he saw action during the Choiseul Island diversion and in operations in the Gilbert Islands, Marshall Islands, Hollandia, Marianas, Western New Guinea, Luzon, Leyte, Iwo Jima and Okinawa Gunto areas. On April 14, 1945, while participating in the Okinawa Campaign the Sigsbee was hit and heavily damaged by a Japanese Kamikaze. In January 1946 he reported as Executive Officer and Navigator on board USS Cruise and in April of that year transferred to similar duty in USS Revenge.

Returning to Annapolis in August 1946, he attended a course in command communications at the Postgraduate School until June 1947, when he joined the presidential yacht Williamsburg as Operations Officer. While in that assignment he also served as a White House Aide and Naval Communications Officer on the Staff of the President of the United States. During the period February 1950 to February 1951 he had duty as Flag Lieutenant on the Staff of the Commander in Chief, US Atlantic Fleet, after which he had command of USS Sage. Detached from command of that mine sweeper in September 1952, he continued duty afloat until March 1954, as Navigator of the USS Mississippi, then was assigned to the Surface Warfare Branch, Office of the Chief of Naval Operations, Navy Department, Washington, DC.

In May 1956 he reported as Executive Officer and Navigator on board USS Allen M. Sumner, and in January 1958 transferred to USS Des Moines to serve as Operations Officer. In July 1959 he became Assistant Officer in Charge of the Atlantic Fleet Operations Control Center, with headquarters in Norfolk, Virginia, and in March 1961 assumed command of USS Lowry. Regularly assigned as flagship of Commander Destroyer Squadron Thirty-two, the USS Lowry was employed from August to December 1962 as temporary flagship for Commander Destroyer Squadron TWENTY-EIGHT, which participated in operations (October-November 1962) in the Quarantine Area during the Cuban Crisis. For his outstanding service while commanding the Lowry, he was commended by the Commander in Chief, US Atlantic Fleet.