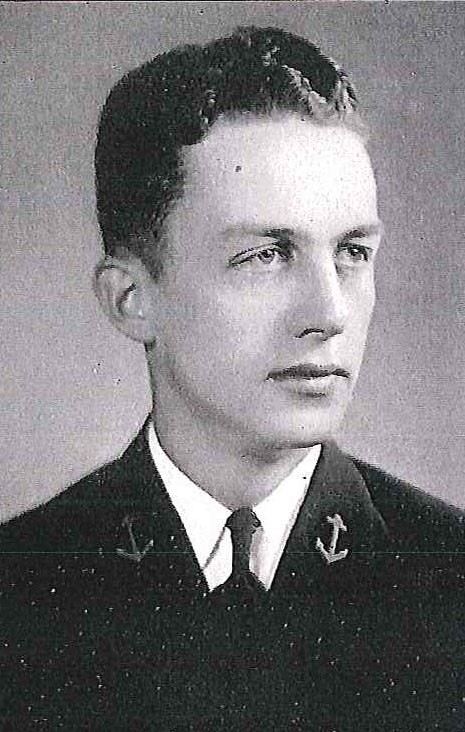 Arthur Turn Decker was born in Scranton, Pennsylvania, on January 3, 1912, son of Arthur Augustus and Mary Lou (Turn) Decker, both now deceased. He attended Harding High School, Aliquippa, Pennsylvania and Wyoming Seminary, Kingston Pennsylvania, prior to entering the US Naval Academy, Annapolis, Maryland, on appointment from his native state in 1931. Graduated and commissioned Ensign on June 6, 1935, he subsequently advanced in rank to that of Captain, to date from July 1, 1954.

Following graduation from the Naval Academy in 1935, he joined USS Louisville and in June 1938 was detached from that cruiser for flight training at the Naval Air Station, Pensacola, Florida. Designated Naval Aviator on August 1, 1939, he joined Scouting Squadron FIVE, based on board USS Yorktown, to serve as Assistant Flight Officer, Gunnery Officer and Engineering Officer until July 1941. He next had duty as an Instructor and Engineer-Officer with the Advanced Carrier Training Group, Atlantic, headquartered at Norfolk, Virginia, and from October 1942 to January 1943 was Assistant to the Officer in Charge of the Scouting-Bombing Unit at the Operational Training Command, Cecil Field, Florida.

In February 1943 he became Executive Officer of bombing Squadron NINE, based on USS Essex, and in September of that year assumed command of the squadron. For outstanding services with Bombing Squadron NINE he was awarded the Distinguished Flying Cross with Gold Star in lieu of the Second Distinguished Flying Cross and the Air Medal with Gold Stars in lieu of the Second, Third and Fourth Air Medal. The citations follow:

Distinguished Flying Cross: “For heroism and extraordinary achievement…in action against enemy Japanese forces near Truk Atoll, Caroline Islands, February 16-17, 1944. Gallantly leading his squadron in three daring strikes against this Japanese bastion of the Pacific, (he) unhesitatingly flew into the face of extremely heavy, accurate hostile antiaircraft fire and fierce enemy fighter opposition to press home vigorous attacks on Japanese shipping, scoring a direct hit on a large cargo ship, completely enveloping it in flames and assisting in the infliction of severe damage to a light cruiser, five large armed cargo ships and a destroyer…”

Gold Star in lieu of the Second Distinguished Flying Cross: “For heroism and extraordinary achievement…in action against enemy Japanese forces in Rabaul, New Britain, on November 11, 1943. Flying through unfavorable weather conditions, heavy fighter opposition and intense antiaircraft fire from shore installations and combatant ships, (he) led his squadron in an attack against enemy shipping which enabled his squadron to score a thousand pound bomb hit on each of two light cruisers, a thousand pound bomb hit on a light or heavy cruiser and several damaging near misses and to shoot down two fighters…”

Air Medal: “For meritorious achievement…in action against enemy Japanese forces at Wake Island on October 5 and 6, 1943. Boldly leading his squadron through intense withering antiaircraft fire, (he) skillfully maneuvered for maximum striking power to press home his own daring powerful attacks, scoring a direct hit on one important target and contributing to the extensive damage inflicted on vital installations on this strongly fortified island…”

Gold Star in lieu of the Second Air Medal: “For meritorious achievement operating against an enemy Japanese base at Tarawa, Gilbert Islands, November 18 to 25, 1943. Participating in the assault and occupation of these islands, (he) boldly led his squadron through intense and withering enemy anti-aircraft fire to carry out repeated, swift and aggressive strikes against an important hostile base in this area, inflicting extensive damage on Japanese aircraft and base installations…”

Gold Star in lieu of the Third Air Medal: “For meritorious achievement…during the initial strike against enemy Japanese forces on Saipan, Marianas Islands, on February 22, 1944. Braving adverse weather conditions which obscured the skies to an altitude of 12,000 feet, (he) led his squadron in an assault on the Japanese installations in the face of enemy antiaircraft fire…”

Gold Star in lieu of the Fourth Air Medal: “For meritorious achievement during the assault and occupation of Roi-Namur, Kwajalein Atoll, Marshall Islands, from January 29 to February 3, 1944. Flying through intense enemy anti-aircraft fire, (he) successfully led his squadron in many attacks, inflicting severe damage to enemy installations…”

He is also entitled to the Ribbon for, and facsimile of the Presidential Unit Citation awarded the USS Essex.

In September 1944 he reported as Aviation Officer on the Staff of Commander Amphibious Group SIX, USS Rocky Mount, flagship. “For heroic service…(in that capacity) in action enemy Japanese forces during five major amphibious assault landings in the Philippines and Borneo, from September 11, 1944 to June 12, 1945…” he was awarded the Bronze Star Medal, with Combat “V.” The citation further states in part:

“Formulating plans for complex air coordination and bombing required to protect our shipping and destroy enemy opposition, Commander Decker created new ideas in conjunction with Army and Marine air group representative for the support of amphibious landings and developed a high degree of coordination by preliminary conferences between all ground, Naval and air units, thereby contributing materially to the success of all operations in which he participated…”

He is also entitled to the Ribbon for, and a facsimile of the Navy Unit Commendation awarded the USS Rocky Mount.

Assigned duty ashore, he served during the period August 1945 to July 1947 in the Aviation Plans Division, Office of the Deputy Chief of Naval Operations (Air), Navy Department, Washington, DC, after which he commanded Air Group THREE, based on USS Kearsarge. In January 1949 he reported as Training Officer on the Staff of Commander Fleet Air, Quonset, with headquarters at the Naval Air Station, Quonset Point, Rhode Island, and from July 1950 to June 1951 was a student at the Naval War College, Newport, Rhode Island.

In July 1951 he joined USS Oriskany as Operations Officer, and in January 1952 transferred to USS Ticonderoga to serve as Executive Officer. He returned to the Oriskany in April 1952 and had duty as Operations Officer and Executive Officer on board her until July 1953. He was awarded a Gold Star in lieu of the Second Bronze Star Medal, with Combat “V,” for meritorious service in Korea from October 31, 1952 to April 21, 1953…”

After an assignment as Director of Service Test at the Naval Air Test Center, Patuxent River, Maryland, he reported in August 1955 as Head of the Air Warfare Division on the Staff of Commander Operational Development Force. Again assigned to the Naval Air Test Center, Patuxent River, he was Test Coordinator from September 1957 until August 1958, then commanded USS Canisteo (AO-99). During the period July 1959 to June 1961 he had duty as a member of the Faculty (Department of Political Affairs) of the National War College, Washington, DC, and in August 1961 was assigned to the Joint Staff (Branch Chief) of the Commander in Chief, Pacific. He was ordered detached in February 1963 for duty as Chief of Staff and Aide to Commander Fleet Air, Jacksonville/Commander Naval Air Bases, Sixth Naval District, with headquarters at the Naval Air Station, Jacksonville, Florida.