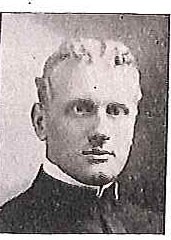 Rear Admiral Ellis was born in Macon, Georgia, on August 26, 1877. On September 5, 1896, he entered the United States Naval Academy, Annapolis, Maryland from the Sixth District of Georgia. As a Midshipman he had active duty during the Spanish-American War, serving aboard USS Minneapolis during the summer of 1898. following graduation form the Naval Academy and the then required two years of service at sea, he was commissioned Ensign on July 1, 1902, and subsequently was promoted progressively until he attained the rank of Rear Admiral on November 13, 1933. On June 23, 1938, he entered the upper half of the list of Rear Admirals and on September 1, 1941, was placed on the Retired List of the Navy.

Rear Admiral Ellis was assigned in August 1900 to USS Brooklyn, and during a year’s service aboard participated in operations in China and the Philippines during the Boxer and Filipino Rebellions, respectively. He remained at sea until September, 1905, during which time he served aboard various ships of the US Navy. He returned to the United States, and to the Naval Academy, for a year’s duty in 1905-1906 and again, after a few months’ service in the battleships Nevada and Arkansas, in September 1906 and remained there until June 1907, when he was ordered to USS Connecticut. He was transferred in 1909 to USS Arethusa and from October, 1909, to September, 1911, had command of USS Iris.

In September, 1911, Rear Admiral Ellis reported to Mendocino, California, for duty with draft of insane patients for Washington, DC, and reporting in October as assistant to the Officer in Charge of the Navy Recruiting Station at Kansas City, Missouri, he became Officer in Charge of that station on November 30 1911. Detached on August 4, 1913, he reported to USS Connecticut, and served as navigator of that battleship until February 1916, during which time he practicpated in the Mexican and Haitian Campaigns. On February 9, 1916, he assumed command of USS Sterling, to serve until July of that year. He then returned to the United States for duty in the Navy Department, Washington, DC, and served first briefly in the Bureau of Navigation, later from November 1916 to August 1917 in the Hydrographic Office, and throughout the remainder of World War I in the Bureau of Navigation.

Detached from the Bureau of Navigation, Navy Department, on April 1, 1919, Rear Admiral Ellis commanded USS Salem until May 1921, when he returned to the Navy Department, this time for duty on the Naval Examining Board, and from September 28, 1921 until February 1922, he had additional duty as Aide and Liaiso. Officer in connection with the Limitation of Arms Conference. From February 24, 1922 until March 28, 1924 he served as Aide to the Secretary of the Navy, the Honorable Edwin Denby. From March 1924 until February 1926 he commanded USS Rochester, after which for the succeeding two years he was a member of the Naval Examining Board and the Naval Retiring, Navy Department, Washington, D.C.

Following command of the battleship Arkansas from June 30, 1928, until May 24, 1930, Rear Admiral Ellis had instruction (Senior Course) at the Naval War College, after which for three years he was Director of Naval Intelligence, Navy Department, Washington, DC. He assumed command of Training Squadron, Scouting Force, USS Arkansas, flagship, on May 24, 1934, and served in that command until May 26, 1936. The following year he had instruction with the advanced class at the Naval War College, after which he returned to the Navy Department for briefduty in January 1937 on the Selection Board. On January 30, 1937, he reported for duty as Commanding Ninth Naval District, and Commanding Naval Training Station Great Lakes, Illinois, and served in that capacity until August 1939.

On September 30, 1939, Rear Admiral Ellis assumed command of Atlantic Squadron, and relieved of that command on November 1, 1940, he became Commander, Parto Force, US Fleet, serving as such until December 17, 1940. He served from January 20, until June 30, 1941, as a member of the General Board, Navy Department Washington, DC. He was relieved of all active duty and placed on the Retired List of the Navy on September 1, 1941.