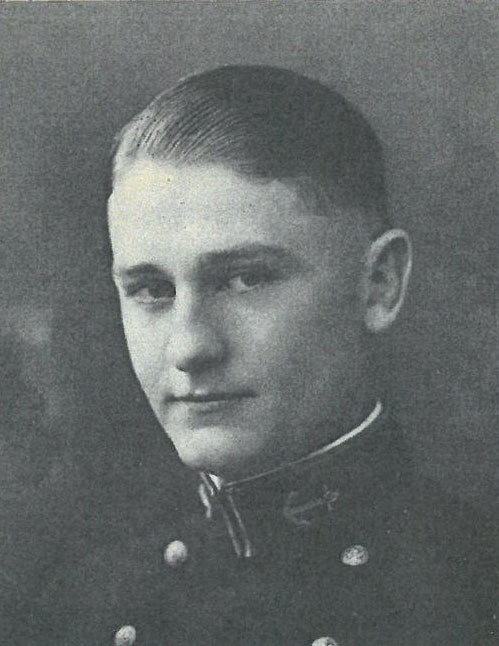 Joseph William Callahan was born in Basin, Montana, on June 28, 1904, son of Corneilius Patrick and Anne Driscoll Callahan. He attended Butte (Montana) High School, before entering the US Naval Academy, Annapolis, Maryland, from his native state in 1922. As a Midshipman he participated in class football and soccer. Graduated and commissioned Ensign on June 3, 1926, he subsequently attained the rank of Captain, to date from August 1, 1943. He was transferred to the Retired List on June 30, 1956, and advanced to Rear Admiral on the basis of combat citations.

Following graduation in 1926, he joined USS Robert Smith, operating in Nicaraguan waters, and between 1928 and 1931 served consecutively in USS Edsall and USS Pittsburgh, units of the Asiatic Fleet. During this period of sea service he made cruises to the Philippines, Japan, and China, operating on the Yangtze River. While he was aboard the Pittsburgh she made good will tour of the East Indies with Governor General Davis of the Philippines aboard, visiting the ports of Saigon, Indo-China; Bangkok, Siam; Singapore; Sumatra; Batavia, Java; Bali; and Macassar Sulu.

Returning to the United States via Europe, in 1931, he transferred, upon arrival to USS Concord. Detached from that cruiser in June 1933, he attended a course in marine engineering at the Postgraduate School, Annapolis, Maryland. Completing his instruction in June 1935, he became Engineer Officer of USS Childs, and served as such until January 1936.

Following fitting out duty in USS Reid at the Federal Shipbuilding and Dry Dock Company, Kearny, New Jersey, he joined that destroyer as Engineer Officer upon her commissioning, November 2, 1936. From June 1938 to June 1940 he served as assistant to the Engineering Member on the Board of Inspection and Survey, Navy Department, Washington, DC, after which he reported as Squadron Engineer on the Staff of Commander Destroyer Squadron Four. He continued staff duty subsequent to the United States entry into World War II, December 8, 1941, and until July 1942, when he assumed command of USS Ralph Talbot.

He was awarded a Letter of Commendation with Ribbon for participant in the Battle of Savo Island in which the Ralph Talbot engaged an enemy cruiser at range of approximately 3000 yards. He brought the Ralph Talbot safely into port in spite of severe damage due to fires, 6 shell hits and flooding of compartments, forward and aft.

He was also awarded the Navy Cross for “extraordinary heroism as Commanding Officer of USS Ralph Talbot during action against enemy Japanese forces on Rendova Island and during subsequent operations incident to the occupation of the New Georgia Islands from June 30 to July 13, 1943…” The citation further states “During the assault on Rendova, (he) directed ship providing cover for transports engaged in landing troops despite attacks by enemy torpedo an dive bomber and threat of enemy submarines and fire from shore batteries. In the restricted waters of the area, he engaged in hazardous operations involving the landing of reinforcements and participated in two effective bombardments of Munda Point. In the second battle of Kula Gulf, he fought his ship aggressively, contributing materially to the destruction of four and probably six Japanese Vessels. When one of our ships was severely damaged by an enemy torpedo during this engagement, he pulled alongside the stricken vessel, took her in tow and removed personnel…”

Relieved of command of the Ralph Talbot in August 1943, he had instruction at the Sound School, Key West, Florida, before reporting, in November 1943, to the Bath (Maine) Iron Works Corporation, for fitting out USS Barton. He assumed command of that destroyer upon her commissioning on December 30, 1943, and for “conscious gallantry and intrepidity (in that command)…during the initial assault on the enemy-held Coast of France and the bombardment of enemy installations at Cherbourg, in June 1944…” he was awarded the Silver Star Medal. The citation continues in part:

“Maneuvering his ship through heavily mined waters and under heavy and accurate gunfire from hostile shore batteries, (he) protected vessels of the Western Task Force Area from enemy surface and submarine forces. Although his ship was damaged by hostile gunfire during the bombardment of Cherbourg, he maintained continuous fire as he covered the retirement of the minesweepers and battleships on two separate occasions by interposing the Barton between the hostile shore and his units, thereby diverting the fire of the shore batteries from these vessels…”

He was also awarded the Croix de Guerre, Order of the Division, by the French Government for his gallantry at Cherbourg.

In October 1944 he became Commander Destroyer Division One Hundred and Two, receiving a Letter of Commendation, with authorization to wear the Commendation Ribbon, from the Commander in Chief, US Pacific Fleet, for “excellent service…from November 1944 to July 1945.” The citation continues in part: “Destroyer Division One Hundred and Two supported the Lingayen Gulf operations by screening CVEs furnishing cover for transports. In June and July 1943 the division conducted shore bombardment, furnished close-in fire support and rendered harassing fire for the invasion of Brunei Bay and Balikpapan in Borneo. These operations took place in hazardous and poorly charted waters. His leadership and professional skill contributed materially to the success of these operations…”

Returning to the United States, he reported, in September 1945, as Commanding Officer of the Naval Reserve Officers Training Corps Unit, Alabama Polytechnic Institute at Auburn. He remained there until June 1948, when he assumed command of Destroyer Squadron Nine, with additional duty as Commander Destroyer Division Ninety-one. From August 1949 to June 1950 he attended a course at the industrial College of the Armed Forces, Washington, DC, after which he had duty in the Office of the Joint Chiefs of Staff, Washington, DC.

In February 1951 he was assigned to the Office of the Deputy Chief of Naval Operations for Logistics where he served as Head of the Transportation and Petroleum Branch, he was ordered detached in December 1951, and in January 1952 reported as Commander Service Squadron Four. A year later he became Assistant Director for Logistic Plans, the Joint Staff Office, Joint Chiefs of Staff, Washington, D. C. In June 1955 he was designated Commanding Officer and Naval Port Control officer, Naval Port Control, Naval Base, San Diego, California and remained in that assignment until retirement, effective June 30, 1956.