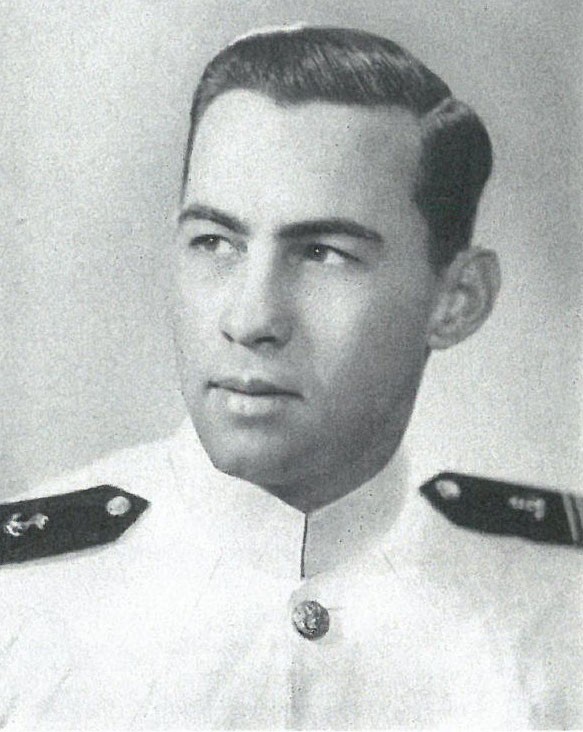 Alan Russel Cameron was born in Los Angeles, California on July 10, 1920, son of  Dougal and Mary (Harvy) Cameron. He attended Alhambra (California) High School, and the University of California at Berkeley, before entering the US Naval Academy, Annapolis, Maryland in July 1939. As a Midshipman he participated in basketball and football, was captain of the football team in 1942, and was the recipient of the Thompson Trophy in 1943. Graduated with the Class of 1944 and commissioned Ensign on June 9, 1943, he subsequently advanced to the rank of Captain, to date from January 1, 1964.

Having had previous service in 1938-1939 in the US Marine Corps Reserve, he reported after graduation from the Naval Academy in July 1943 for two months' duty as Instructor at the Naval Academy. During the period September to December 1943 he was an Air Observer at Naval Air Station, Jacksonville, Florida, after which he served in USS Drayton (DD-366) in the Western Pacific. From November 1945 until February 1946 he had instruction at the Gunnery School, Washington, DC, and the next month was assigned as Engineering Officer of USS Taussig (DD-746), which operated in the China Area. In January 1947 he became Executive Officer of USS Goselin (APD-126), and in April 1948 reported as Flag Lieutenant to Commander Amphibious Group ONE. He had similar duty to Commander Amphibious Force, Pacific from January 1950 until July 1951, then served as Assistant Professor of Naval Science with the Naval Reserve Officers Training Corps Unit at the University of California at Los Angeles for the next two years.

From August 1953 to June 1954 he attended the Command and Staff Course at the Naval War College, Newport, Rhode Island, and in September that year assumed command of USS Diachenko (APD-123). Under his command, the Diachenko served as flagship for the Evacuation Unit Commander during the "Passage to Freedom" operation which carried refugees out of North Vietnam. Between December 1956 and Augus 1958 he was Assistant Operations Officer on the Staff of Commander in Chief, Pacific Fleet, and for the next three years was Assistant Head, Naval Amphibious Warfare Section, Office of the Chief of Naval Operations, Navy Department,Washington, DC.

In October 1961 he assumed command of USS Prichett, (DD-561), and in March 1963 became Commanding Officer of USS Preble (DLG-5). In August 1964, he reported for instruction at the Industrial College of the Armed Forces, Washington, DC.