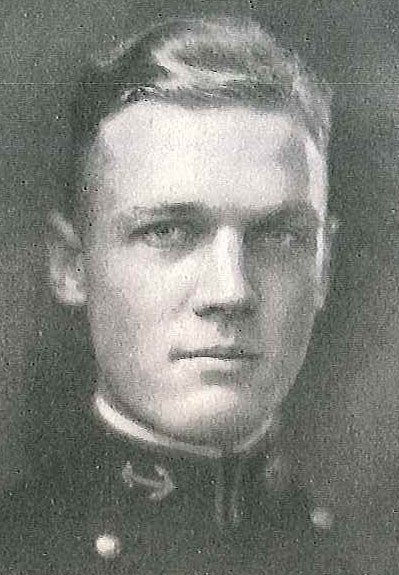 Maurice Mortimer DeWolf wad born in Hart, Michigan, on April 26, 1901, son of Dolph S. and Eva Feltzer DeWolf. After attending Marion Military Institute, Marion, Alabama, he entered the US Naval Academy, Annapolis, Maryland, on appointment from his native state on June 11, 1920. Graduating with a Bachelor of Science degree, he was commissioned Ensign in the US Navy on June 4, 1924, and was promoted to Lieutenant (junior grade) three years later. He resigned his commission in October 1927, and a month later was appointed Lieutenant (jg) in the US Naval Reserve. Through subsequent promotions and his transfer from the Naval Reserve to the regular Navy, he attained the rank of Captain, to date from March 15, 1945.

After graduation from the Naval Academy in June 1924, he reported to USS Concord, and served for two years as a junior officer in that light cruiser, then flagship of Destroyer Squadrons, Scouting Fleet, operating in the Atlantic. He had brief instruction at the Naval Torpedo Station, Newport, Rhode Island, and in July 1926 joined USS Lardner, a destroyer operating with US Naval Forces, Europe, and served on board until his resignation from the Navy became effective on October 31, 1927.

While in inactive status as a Member of the Naval Reserve from 1927 until 1940, he conducted his own commodity business as a floor trader and broker on the New York Coffee and Sugar Exchange. He was called to active duty in July 1940, and served until March 1942 as an instructor in the Department of Seamanship and Navigation at the Naval Academy. He was then ordered to the Bethlehem Steel Company’s plant at Quincy, Massachusetts, to assist in fitting out USS Massachusetts, and from her commissioning, on May 12, 1942, until June 1944, he served in that battleship, first as Assistant Damage Control Officer, then Deck and General Service Officer.

During his period of duty on board the Massachusetts, that battleship participated in action off Casablanca and the Algeria-Morocco landings, in the European-African Theater, and, transferring, via the Panama Canal, to the Pacific Combat Area, took part in the Gilbert Islands operations; the occupation of Kwajalein and Majuro Atolls; the Marshall Islands operation (Truk and Marianas attacks, and raids on Palau, Yap, Woleai, Truk, Satawan and Ponape); and the Hollandia (New Guinea) operation.

He received a Letter of Commendation, with Ribbon, from the Commander in Chief, Pacific Fleet “For excellent service…as First Lieutenant and Damage Control Officer of the USS Massachusetts from 28 September 1943 to 8 April 1944, in connection with improving the efficiency of the ship’s defense against enemy aircraft, and for increasing her battle efficiency…”

He again returned to the Naval Academy in August 1944, and for a year was Executive Officer of Reina Mercedes, station training ship there. In September 1945 he reported to the Naval Air Station, Jacksonville, Florida, where he established, and became Commanding Officer of the Personnel Separation Center. He continued in command of that post-war activity until September 1946. He was awarded a Letter of Commendation, with authorization to wear the bronze star on his Commendation Ribbon, from the Secretary of the Navy, as follows:

“For outstanding performance of duty as Commanding Officer of the US Naval Personnel Separation Center, Jacksonville, Florida, from 13 August 1945 to 21 September 1946. Serving with extraordinary organizational and administrative proficiency, Captain DeWolf achieved distinctive success in the rapid development of an efficient and orderly separation process. Under his skilled and understanding leadership, the Center provided comprehensive advice to separatees as to their rights as veterans under existing legislation; gave complete physical examinations; furnished all documents to which personnel were entitled and processed accurate records and documents constituting a protection both to the individual and to the Government in years to come…”

He was detached to report to the Commandant, Seventh Naval District, Jacksonville, and during the seven months following served as Assistant Chief of Staff (for Personnel). In May 1947 he joined the staff of Commander Naval Forces, Guam, serving until November 1948 as Liaison Officer with the Chinese-Marianas Service Command, Office of Foreign Liquidation Commission for Marianas, Marshall-Gilbert Area, and Guam Islands. In January 1949 he assumed command of USS Elokomin (AO-55), remaining in command until April 1950.

In May 1950 he was sent to Yale University, New Haven, Connecticut, to be Professor of Naval Science in the Naval Reserve Officer Training Corps Unit, and during the period ending March 1952, had additional duty concerning the administration and supervision of Naval Officers enrolled under the Naval five-term college training program. In April 1952 he reported as US Naval Attache and US Naval Attache for Air, at the American Embassy, Paris, France. There he had additional duty as Attache for Naval Questions, Berne, Switzerland. He is now under orders to duty as Chief of Staff and Aide to the Commandant, Third Naval District, Headquarters at New York, New York.