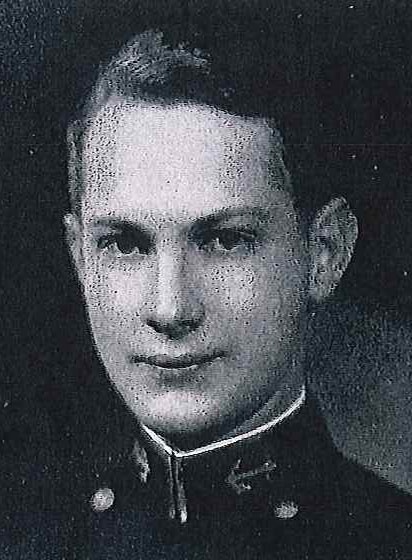 Daniel Lynn Carroll, Jr, was born in Stillwater, Minnesota, on March 5, 1910, son of Daniel L. and Pearl Tuttle Carroll. He attended University High School in Minneapolis, Minnesota, and entered the US Naval Academy, Annapolis, Maryland, on appointment from his native state, on July 9, 1928. Graduated with the degree of Bachelor of Science and commissioned Ensign in the US Navy on June 2, 1932, he subsequently advanced to the rank of Captain, to date from January 1, 1951.

After graduation from the Naval Academy in June 1932, he served until May 1934 as a junior Officer on board USS Saratoga, and for four years thereafter as Engineer of USS Decatur. In July 1938 he returned to Annapolis for instruction at the Naval Postgraduate School, and continued the course in Naval Engineering, Design at Massachusetts Institute of Technology from July 1940 until June 1941. That mouth he joined the Staff of Mine Squadron Two, as Engineer, and in September was transferred to Engineering duty on board USS Maryland. He was on board the Maryland when the Japanese bombed the Fleet at Pearl Harbor, December 7, 1941, and returned to the West Coast with her (the Japanese had reported the Maryland sunk with four other battleships on that day) twenty-three days later for battle-damage repair.

Detached from the Maryland in September 1943, he served from October, that year, until September of 1945 at the US Naval Dry Docks, Treasure Island, California, with a year as Plant Superintendent and ten months as Repair Superintendent. He received a Letter of Commendation with Ribbon from the Secretary of the Navy, which follows, in part:

“For outstanding performance of duty which serving successively as Planning Superintendent and Repair Superintendent at the US Naval Dry Dock from November 1943 to July 1945. Instrumental in the development of a major repair yard despite critical manpower and material shortages, Commander Carroll made a signal contribution to the war effort in the fulfillment of urgent Fleet requests for the speedy repair and conversion of numerous vessels while the base was still in the construction stage. When the Navy was carrying the flight to the Japanese Empire in the closing phase of the war, and operations demanded every available vessel within the shortest period of the time, his intelligent administration and tireless efforts insured the completion and repair of many important ships of the Fleet…”

During the period September 1945 until February 1947 he was assigned to the Office of Industrial Management at San Pedro, California, serving as Executive Officer until June 1946, and as Assistant Industrial Manager the last nine months. In March 1947 he reported to the Office of the Superintendent of Shipbuilding, Quincy, Massachusetts, where he was Inspection Officer and Assistant Superintendent of Shipbuilding until November 1949. Transferring to the New York Naval Shipyard, he served until September 1951 as Industrial Engineering Officer until September 195. The next three years were spent in the Mediterranean as Fleet Maintenance Officer on the Staff of the Commander in Chief, Naval Forces, Eastern Atlantic and Mediterranean, and upon his return to the United States in September 1954, he was ordered to the Bureau of Ships, Navy Department, Washington, DC. There he served for two years as Director, Field Inspection Division.

Under orders of July 3, 1956, he had tour of duty at the Norfolk Naval Shipyard, Portsmouth, Virginia, and on April 22, 1959, was again ordered to the Bureau of Ships, Navy Department, where he currently serves as Assistant Chief of the Bureau, for Field Activities.