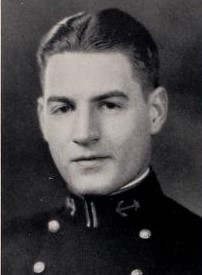 Walter Dan Coleman was born in Lincoln, Illinois, on March 25, 1910, son of Dr. William Walter Coleman and Mrs. (Bida Ellen Dunham) Coleman both now deceased. He attended Lincoln Community High School and Kemper Military Academy, Bonneville, Missouri, before entering the US Navy Academy, Annapolis, Maryland, on appointment from his native state on June 18, 1928. As a Midshipman he played basketball for two years, football three years, and was a member of the Track Team for four years. Graduated with the degree of Bachelor of Science and commissioned Ensign in the US navy on June 2, 1932, he subsequently advanced to the rank of Captain, to date from January 1, 1951.

After graduation from the Naval Academy in June 1932, he was assigned to the USS Tennessee, in which he served as a junior Deck Division Officer from July 1, that year until June 1 of the next. He then served as Assistant Ordnance Officer and Assistant Engineer Officer of the USS Mississippi until December 1, 1934. Both vessels were then units of Battleship Divisions, Battle Force. In February 1935 he joined the USS Pecos, operating on Asiatic Station, and after duty as Communications Officer in the auxiliary vessel, he was transferred in August 1, 1935, to the USS Augusta, Flagship of the Commander in Chief, Asiatic Fleet. In the latter he served as Deck Division Officer, Assistant Gunnery Officer, and as Communication Officer on the Staff of the Commander in Chief, Asiatic Fleet.

From October 1, 1937 until June 1, 1938, he served as Gunnery of the USS Roper (DD-147), a unit of Destroyer Squadron 10, Drill Detachment, and during the next three years he was a student in Ordnance at the Naval Postgraduate School, Annapolis, Maryland. On July 1, 1941, he joined the USS Monssen (DD-436) and was serving as that destroyer’s Gunnery Officer at the outbreak of World War II in December, that year. He later moved up on Executive Officer of the Monssen, and as such participated in the Guadalcanal-Tulagi landings (including First Savo), the capture and defense of Guadalcanal, and operations in the Eastern Solomon (Stewart Island). \

Detached from duty in the Monssen on November 1, 1942, he reported the same day for duty as Ordnance and Gunnery Officer on the Staff of Commander Destroyers, Pacific Fleet. He returned to the United States in June 1944, and after fitting out the USS Hart (DD-594) at the Puget Sound Navy Yard, Bremerton, Washington, assumed command of that destroyer at her commissioning on November 4, 1944. Under his command, during the later period of the war, the Hart too part in the assault and occupation of Okinawa and the Borneo operations (Brunel Bay and Balikpapan).

He received a Letter of Commendation, with Ribbon, from the Commander in Chief, US Pacific Fleet, as follows: “For meritorious service in connection with operations against the enemy while serving as Commanding Officer of the USS Hart from 19 February to 15 August 1945. Taking part in the assault and invasion of Brunei Bay, his ship furnished accurate fire support to landing troops. His professional skill and outstanding seamanship materially contributed to the USS Hart’s success in this and other Borneo operations…”

Detached from command of the hart on June 1, 1946, he reported a month later to the Bureau of Ordnance, Navy Department, Washington, DC, for a tour of duty in the Mine Procurement division. He attended the Armed Forces Staff College, Norfolk, Virginia, during the period January 1 to June 1, 1949, and for a year thereafter served as Assistant Gunnery on the Staff of Commander Service Force, Pacific Fleet. On June 1, 1950, he became Chief Staff Officer to Commander Service Squadron Three, and remained on duty in that capacity until November 1, 1951, including operations in the Korean Area for more than seven months.

“For exceptionally meritorious conduct in the performance outstanding service as Chief Staff Officer on the Staff of Commander Service Squadron Three from 15 July 1950 to 28 February 1951, in support of US Naval Forces operating against the enemy in the Korean Theater….” He was awarded the Legion of Merit. The citation continues: “Displaying a professional knowledge in organization and administration, as well as exemplary foresight, outstanding professional skill and brilliant comprehension of all phases and scopes of mobile logistics services, he contributed in large measures to the successful execution of Service Squadron Three’s assigned missions of furnishing mobile replenishment to the Fleet while performing sustained operations against the enemy….”

From December 1951 until April he served as Material Officer on the Staff of the Commander Operational Development Forces, Atlantic. He next commanded the Naval Ammunition Depot at Oahu, Territory of Hawaii, May 1953 to July 1955, and on September 1, 1955 assumed command of the USS Henrico (APA 45). Detached in October 1956, he had command of Transport Division 52 from November of that year until September 4, 1957, when he became Commander Amphibious Squadron Five. After five months in the latter command, he reported on February 8, 1958, as Assistant Chief of Staff for Operations, Plans, and Training, in the Staff of Commander Amphibious Force, Pacific. On March 5, 1958, he was designated Chief of Staff and Aide to Commander Amphibious Force, Pacific, and on December 22, 1949 he was ordered detached for duty as Commander Naval Ordnance Laboratory, white Oak, Maryland. On July 1, 1962, he was transferred to the Retired List.