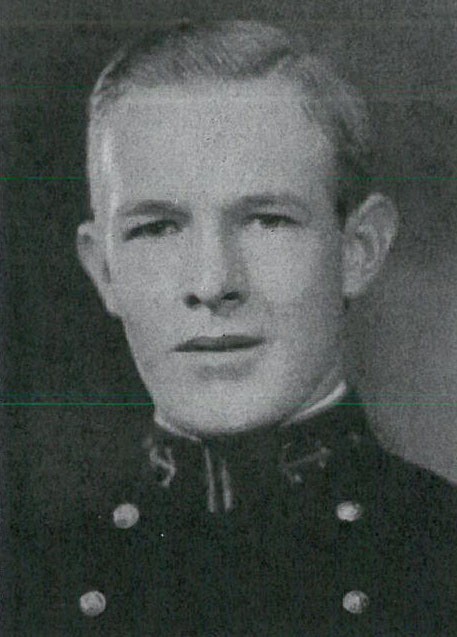 Commander Baker was born on February 19, 1909, in Yakima, Washington, son of Wilfred Francis Baker and Mrs. Alzadia Brownfield Baker. He attended Lower Naches High School in that city and the University of Washington in Seattle for a year before his appointment to the US Naval Academy from the Fourth Congressional District of Washington. While a Midshipman he was Literary Editor of “The Log,” and received his “N” in Rifle (service and smallbore calibers). He was graduated and commissioned Ensign on June 2, 1932, and advanced progressively to the rank of Commander, his date of rank November 18, 1942.

From June 30, 1932 until June 11, 1934, Commander Baker served aboard USS Milwaukee. He was then ordered to the Submarine Base, New London, Connecticut, and after a period of instruction ending December 14, 1934, his submarine service began on January 3, 1945. He served successively aboard USS Narwhal, USS S-33 and USS S-26, qualifying in June 1938 to command submarines. Under order of May 21, 1938 he reported to the Postgraduate School, Annapolis, Maryland, for instruction in Ordnance Engineering. Continuing the course at the Navy Yard, Washington, DC, the Naval Powder Factory, Indianhead, Maryland, and the University of Michigan, Ann Arbor, he received the degree of Master of Science from the latter in 1940.

Following a brief tour of duty in the Bureau of Ordnance, Navy Department, Washington, Commander Baker reported on November 1, 1940, to the Naval Powder Factory, Indianhead, Maryland, where he served until July 16, 1941. He was detached with orders to Submarine Squadron Twenty, Asiatic Fleet, reporting in August of that year and remaining until shortly after the Japanese attack on Pearl Harbor, TH on December 7, 1941, aboard USS Permit. For service aboard that vessel in defense of the Philippines, under Army Command, he is entitled to wear the Army Distinguished Unit Badge.

He had duty on the staff of Command Submarines, US Asiatic Fleet before assuming command, on May 28, 1942, of USS Snapper (SS-85) and served in that command until October 20 of that year. He then proceeded via the Twelfth Naval District, San Francisco, California, to command USS Cuttlefish (SS-171), reported December 31, 1942. On September 3, 1943, he was relieved and in October reported for duty with Commander Submarines, Seventh Fleet. In November he was assigned to the staff of Commander Submarine Squadron Sixteen.

For outstanding service as Operations and Gunnery Officer on the staff of Submarine Squadron Sixteen, Commander Baker was awarded the Bronze Star Medal with citation as follows:

“For meritorious service as Operations and Gunnery Officer of Submarine Squadron SIXTEEN and of several additional Task Groups operating from Advanced Pacific Bases from October 30, 1943, to June 28, 1945. Skilled in the performance of his duty, Commander Baker supervised the operations of submarines undergoing training, the assignment of training areas, the administration of gunnery needs and problems and, in addition, provided escort and target services for submarines and anti-submarine training exercises. His leadership and devotion to duty were in keeping with the highest traditions of the United States Naval Service.”

Upon his return to the United States, Commander Baker began duty in the Bureau of Ordnance, Navy Department, Washington, DC, on August 7, 1945. He served in that Bureau until December 19, 1947, when he reported for duty as Commanding Officer of USS Rich (DD-820), present command.