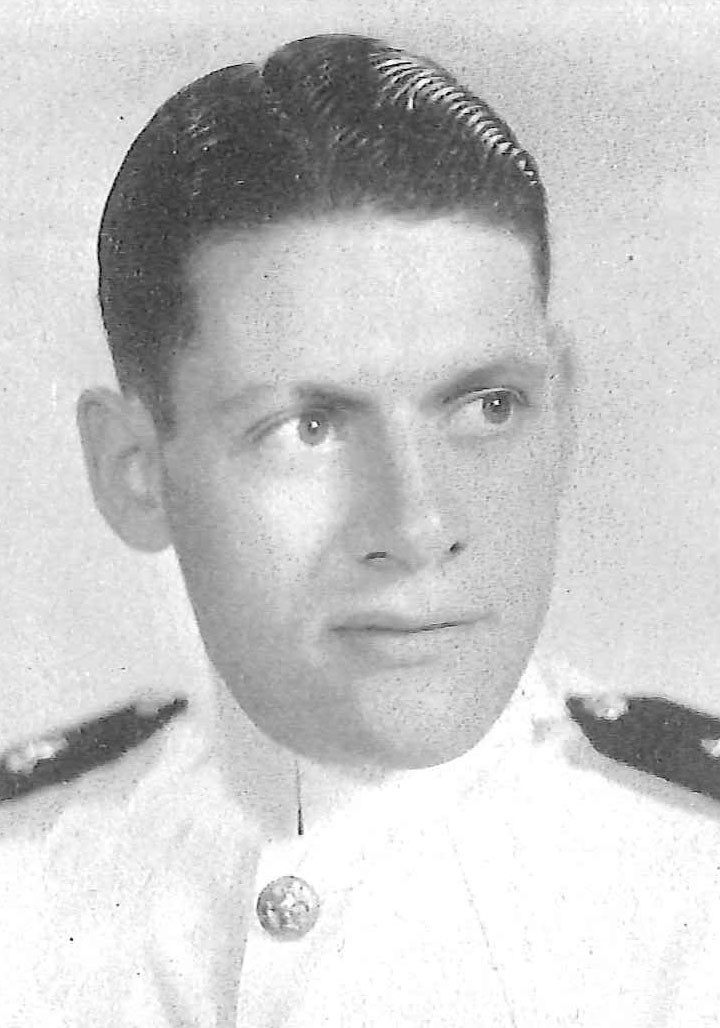 Vincent Louis Cassani, Jr., was born in Cambridge, Massachusetts, on December 16, 1921, son of Vincent L. and Dora (Bonzagni) Cassani. He attended Chelsea Senior High school, Chelsea, Massachusetts, and Severn School, at Severn Park, Maryland, prior to entering the US Naval Academy, Annapolis, Maryland, on appointment from his native state in 1940. Graduated with the Class of 1944 on June 9, 1943 (course accelerated due to war emergency), he was commissioned Ensign in the US Navy to rank from that date. He subsequently advanced to the rank of Captain, USN, to date from July 1, 1964.

After graduation from the Naval Academy in 1943, he joined USS Trippe (DD-403) and served as Assistant Gunnery Officer, later Fire Control Officer in the Atlantic and Mediterranean Theatres until April 1945, participating in the Salerno and Anzio landings and Atlantic Convoys to the Mediterranean and Southern Europe. The Trippe was transferred from the Atlantic to the Pacific War Area, and as her Gunnery Officer he participated in convoy operations to Ulithi, Saipan and Okinawa, during the period April to July 1945. He served as her Navigator for a month, and after the cessation of hostilities in August 1945 served for a year as Executive Officer and Navigator. In that capacity he participated in the occupation of Chichi Jima, and later in Operations Crossroads, the atom bomb tests in the pacific in that summer of 1946.

From November 1946 until January 1948 he was Executive Officer and Navigator of USS Jeffers (DMS-27) of the Mine Force, Atlantic Fleet, and for almost three years thereafter served as Assistant Readiness and Training Officer, as well as Assistant Ordnance Material Officer and Flee Navigator on the Staff of Commander in Chief, US Atlantic Fleet. In October 1950 he assumed command of USS Seer (AM-112), which also operated with Mine Force, Atlantic Fleet, and from April 1952 until May 1953 he commanded Mine Division Thirty Three which participated in wartime minesweeping operations in North Korean waters in support of the United Nations Blockade of North Korea,

He was awarded the Bronze Star Medal with combat “V,” for meritorious service in that command while in the Korean Area from April 6, 1952 to February 25, 1953, and is also entitled to the Ribbon for, and the facsimile of the Korean Presidential Unit Citation awarded Mine Division Thirty-Three. During August and September 1952, while in the above command, he had temporary additional duty as Commanding Officer of USS Chief (Am-315), engaged in minesweeping in North Korean waters, and in February and March 1953 he observed British minesweeping exercises in the Singapore Area, while temporarily assigned as an Observer with British Minesweeping Squadron Six.

After his return to the United States, he reported in July 1953 for duty with the Fleet Training Group, Key West, Florida, and served as Training Officer, with collateral duty as Chief Staff Officer during the two years he spent in that assignment. He was a student at the U.S. Naval War College, Newport, Rhode Island, from August 1955 until June 195, when he completed the Command and Staff course. In July of that year he joined USS Northampton as Navigator, also serving as Special Service Officer, until detached in March 1958 for duty as Assistant Training Officer with the Fleet Training Group, Guantanamo Bay, Cuba. While in that assignment he also served as Senior Observer on Arrival and Operational Readiness Inspection of ships in training. In April 1959 he became Damage Control Officer with the Fleet Training Group, at Guantanamo Bay.

He commanded USS Damato (DDe-871) from July 1960, until June 1962 and the next month reported for duty at the U.S. Naval Academy. He was Battalion Officer, Operations Officer, and Head of the Administration Division for one year each and when detached in June 1965 assumed command of  USS Frontier (AD-25) the next month. In October 1966 he became Head of the Career Activities Branch, Bureau of Naval Personnel, Navy Department, Washington, D.C.