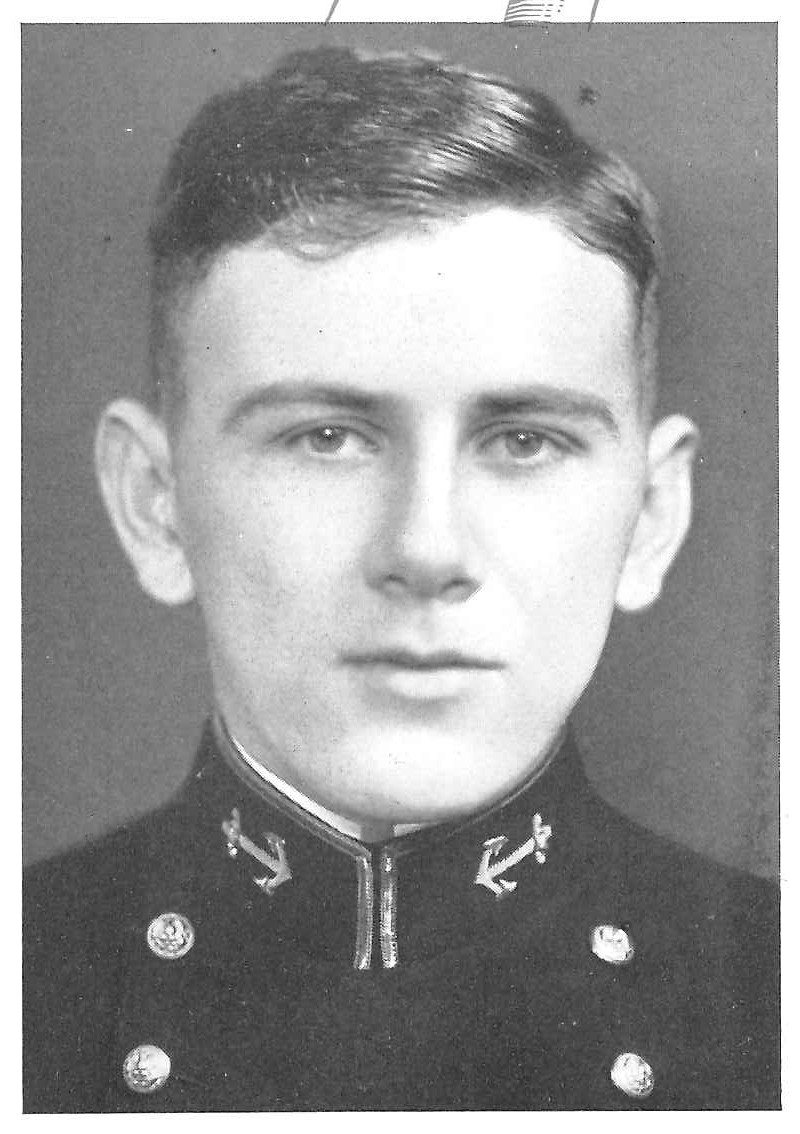 Harry Brinkley Bass was born in Chicago, Illinois, on July 4, 1916, son of Percy and Verna (Maulding) Bass.  He attended Beaumont (Texas) High School, Lamar Junior College in Beaumont and US Halls War College, Columbia, Missouri, prior to his appointment to the US Naval Academy, Annapolis, Maryland, from the Sixth District of Arkansas in 1934.  Graduated and commissioned Ensign on June 2, 1938, he subsequently advanced in rank, attaining that of Lieutenant Commander, to date from March 1, 1944.

Following graduation from the Naval Academy in 1938, he reported aboard the USS New Orleans, and in June 1939 transferred to the destroyer Farragut.  Detached from the latter in August 1940, he was ordered to the Naval Air Station, Pensacola, Florida, for flight training.  Designated Naval Aviator on February 18, 1941, he was next assigned for two months’ further instruction, to the Naval Air Station, Miami, Florida.  In May of the same year, he joined Bombing Squadron TWO, based on the USS Lexington and as a member of that squadron, participated in the Army maneuvers held in Louisiana in September of that year.  Three months later the United States entered World War II, and the Lexington, with her embarked aircraft, was ordered to the Pacific.

Operating with a Task Force off Bougainville, New Guinea, in February 1942, the Lexington was sighted by two Japanese four-engine Kawanishi flying boats on patrol.  Pilots of the Lexington's aircraft shot down both enemy planes, but not before they had him radioed their forces of the presence of United States ships.  Eighteen Japanese twin-engine bombers set out in two flights of nine planes to bomb the ships of our forces.  Sixteen of these were shot down by pilots of the Lexington and the remaining two fled.

On the morning of March 10, 1942, he participated with other planes from the Lexington in a surprise raid upon Japanese ships at Lae and Salamaua, New Guinea, returning with a credit of fifteen enemy vessels sunk or damaged, with a loss of only one plane from the Lexington.  This raid was so effectively executed that carrier and other ships left the area without being located.  Later during the Battle of the Coral Sea, May 7-8, 1942, he, flying with other planes from the Lexington, aided by those from the carrier, the damaging of another, and in the shooting down of sixty-seven Japanese planes.  The Lexington, under counter-attack by the Japanese during the latter stages of this battle, was hit by two torpedoes and at least two bombs and as a result was sunk.

For outstanding services as a pilot of Bombing Squadron TWO, he was awarded the Navy Cross and a Gold Star in lieu of a Second Navy Cross.  The citations follow in part:

Navy Cross: “For distinguished service…when on March 10, 1942, in enemy waters, he pressed home, in the face of heavy anti-aircraft fire, a vigorous and determined dive bombing attack on enemy ships, sinking one of them.”

Gold Star in lieu of the Second Navy Cross: “For extraordinary heroism and conspicuous devotion to duty as a pilot of a dive bomber in action against Japanese forces in the Coral Sea on May 7, 1942.  In the face of heavy antiaircraft fire and fierce fighter opposition, he dived his plane at an enemy Japanese aircraft carrier and released his bomb with calm and accuracy.  By grim determination and expert appraisal of his objective, he contributed materially to the high percentage of hits inflicted by his particular squadron and assisted in ultimate destruction of the enemy carrier.  His individual action as an important factor in the collective success of those United States Naval Forces which engaged the enemy in the Battle of Coral Sea.”

After the loss of the Lexington in May 1942, he was ordered to duty in connection with fitting out Escort Fighting Squadron TWENTYNINE, to be assigned to the USS Santee, hastily converted from a fleet oiler to a “baby flattop.”  The squadron joined the Santee upon her commissioning, July 20, 1942, and subsequently got underway from Norfolk, Virginia, to take part in the North African invasion.  He became Commanding Officer of Escort Fighting Squadron TWENTY NINE on December 21, 1942.  Awarded the Silver Star Medal and the Air Medal, he was cited in part as follows:

Silver Star Medal: “For conspicuous gallantry and intrepidity as pilot of an airplane in Escort Fighting Squadron TWENTY NINE…during the occupation of French Morocco, November 8-10, 1942.  Leading a three-plane raid on a hostile airfield, Lieutenant Bass, with bold determination and utter disregard for his own personal safety, contributed to the destruction of six planes and damage to four others.  On subsequent occasions he led vigorous attacks against enemy gun emplacements, aircraft, and truck columns which resulted in the silencing of two 75-mm. guns and the destruction of nineteen planes and fourteen trucks…”

Air Medal: “For meritorious achievement…in action against an enemy submarine on July 14, 1943.  When a hostile undersea craft was sighted during an anti-submarine patrol (he) immediately maneuvered his plane into position for a daring, effective strafing run.  Pressing home repeated attacks with superb skill and accuracy, he inflicted severe damage on the submarine’s conning tower and dispersed her exposed personnel, thereby forcing the enemy ship to submerge and rendering her extremely vulnerable to the subsequent bombing attacks of a companion plane…”

He also received a Letter of Commendation, with authorization to wear the Commendation Ribbon, from the Commander in Chief, US Atlantic Fleet, for outstanding services in connection with “the anti-submarine activity…of the planes of Fighting Squadron TWENTY NINE during the period June 15, 1943 to August 6, 1943…”  He was also entitled to the Ribbon for, and a facsimile of the Presidential Unit Citation awarded the USS Santee.

In April 1944 he joined Fighting Squadron SEVENTY FOUR, attached to the USS Kasaan Bay, as Commanding Officer and was serving in that capacity at the time of his death as a result of a plane crash in the combat area of the Mediterranean on August 20, 1944.  “For heroism and extraordinary achievement…during the amphibious invasion of Southern France in August 1944…” he was awarded the Distinguished Flying Cross.  The citation further states in part:

“Courageously leading his flight on several extremely hazardous armed reconnaissance missions deep into enemy territory, Lieutenant Commander Bass repeatedly carried out daring low-level strafing attacks on troop concentrations, motorized convoys and strongpoints in the face of intense, accurate antiaircraft fire, thereby seriously disrupting the movements of the enemy to the rear and effectively facilitating the advance of our ground forces.  On one occasion, he initiated an attack on a hostile plane which resulted in the immediate destruction of the aircraft and, by his consistently skillful execution of his perilous missions throughout this important period, was highly instrumental in the acquisition of vital information concerning enemy troop movements and concentrations…”

A Destroyer the USS Brinkley Bass (DD 897), has been named in honor of the late Lieutenant Commander Harry Brinkley Bass, USN.  The vessel, sponsored by his mother, Mrs. Percy Bass, was launched at the Consolidated Steel Corporation, Shipbuilding Division, Orange, Texas.