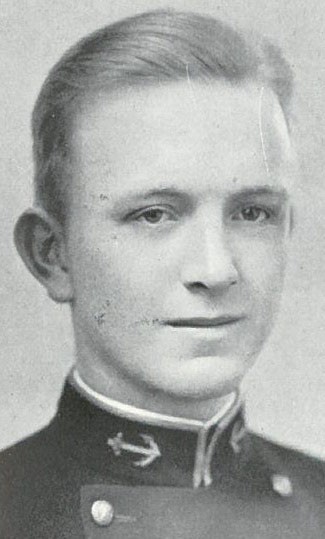 Earl Kendall Van Swearingen was born in Kansas City, Missouri on 15 June 1905. He attended public schools in Los Angeles, California, and Mount Vernon, Missouri, and upon graduating from Manual Training High School in his native city in 1923, he received an appointment to the United States Naval Academy, Annapolis, Maryland. As a midshipman he was member of the Glee Club, Naval Academy Choir, was cartoonist for The Log, and in 1927 was Associate Editor of the Lucky Bag, yearbook. Graduated and commissioned Ensign in June 1927, he advanced in grade to the rank of Captain to date from 20 March 1945.

Upon graduating in 1927, he was assigned to USS New York and served in Junior Officer duties. In 1928 he qualified as an aircraft gunnery observer, and in January 1929, he transferred in that duty to USS Colorado. In May 1931 he was detached as Anti-aircraft Control Officer aboard the Colorado, and ordered to the Naval Air Station, Lakehurst, New Jersey, for instruction in lighter-than-air aviation and qualified as a Naval Aviator (Lighter-than-air). He flew in the Los Angeles, the Akron, various non-rigid airships, but was not attached to those ships. In July 1934 he was ordered to USS Macon and served until the Macon made a forced landing and was lost at Point Sur, California, on 12 February 1935. He was then ordered to Lakehurst, where he served until April 1936 as Parachute Test and Material Officer, and Officer in Charge, enlisted men’s airship and parachute schools.

The years 1936-41, he served consecutively in USS Manley with the Special Service Squadron, and USS Bagley as Gunnery Officer, and was Executive Officer of the latter when detached in February 1941. From March, 1941 he served as Gunnery and Operations Officer on the staff of commander Destroyer Squadron 4, and participated in the defense of Pearl Harbor, 7 December 1941, later being with the destroyers screening USS Saratoga which attempted the relief of Wake Island, and in supporting forces during raids on Marshall Islands.

As Commanding Officer of USS Henley on escort duty in 1942, he participated in the first Savo Island battle and Guadalcanal-Tulagi landings, the night action in which USS Blue was lost, and later in operations with Southwest Pacific Forces in Australian waters. In 1943 he was ordered as Commanding Officer of USS Izard. Assigned to a Fast Carrier Task Force, he participated in the capture of the Gilbert Islands, bombardment of Nauru, capture of Marshalls, raids on Truk Atoll, the Marianas, Palau, Yap, Woleai, and other actions until detached in February 1944. He was awarded the Letter of Commendation with Ribbon by the Commander in Chief, Pacific Fleet, “for exceptionally meritorious conduct in the performance of outstanding services,” while serving in that command, from 25 January to 27 February 1944.

Returning from the Pacific Fleet, he was assigned as Officer in Charge, Fleet Gunnery and Torpedo Schools on the staff of Commander, Destroyers, Pacific Fleet. Given duty at sea a year later, he served as Commanding Officer consecutively of that attack transports, USS Sumter and USS Monrovia. When relieved of that command in the summer of 1946, he reported to the Naval Gun Factory, Washington, DC, where he served two years, followed by one year as Officer in Charge, Naval Gunfire Support School, Naval Amphibious Training Unit, Naval Amphibious Base, Little Creek, Virginia.

When detached in the spring of 1949, he assumed command of Destroyer Squadron SIX, and in March 1950 reported as Director of the Performance Division, Bureau of Naval Personnel, Navy Department, Washington, DC. Continuing duty in the Bureau, he served from December 1950 until May 1953, as Director of the Research Division. He then commanded USS Newport News.