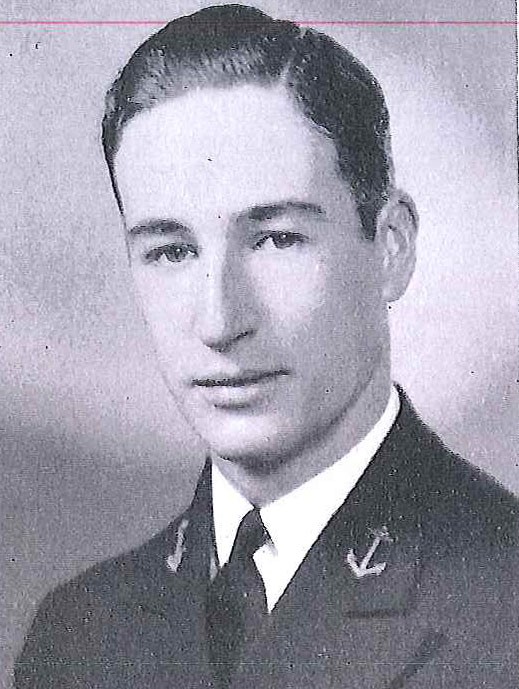 Born in Arpan, South Dakota, Lawrence George Bernard attended schools in Deadwood, South Dakota and Annapolis, Maryland, prior to his appointment to the Naval Academy in 1933. Graduating in June 1937, his first assignment was on board the battleship California (BB-44), in which he served for two years. Following submarine training, he joined the submarine S-29 early in 1939, and was attached to her, operating in the Philippines area, when the United States entered World War II, December 8, 1941. He subsequently made five war patrols in that vessel before he was detached, and was awarded the Silver Star Medal for “conspicuous gallantry and intrepidity” in connection with certain of these operations.

Transferred to USS Puffer, then building at Manitowoc, Wisconsin, he participated in one war patrol on board that submarine and for service at that time was awarded the Bronze Star Medal with Combat “V.” In the spring of 1944 he assumed command of the submarine R-2, and in July 1945 reported on board USS Archerfish as Prospective Commanding Officer. While he was attached to the Archerfish he made one war patrol prior to the cessation of hostilities in 1945 and was present on board that submarine in Tokyo Bay during the surrender ceremonies.

Between 1945 and 1948 he had consecutive command of the submarines Stickleback and Brill after which he served for two years as Executive Officer of the Naval Reserve Officers Training Corps Unit at Iowa State College of Agriculture and Mechanic Arts, Ames, Iowa. Following a short assignment as Inspector-Instructor at the Naval Reserve Training Center, Baltimore, Maryland, he reported in May 1951 as Gunnery Officer on the Staff of Commander Submarine Force, US Atlantic Fleet. In January 1953 he became Commander Submarine Division TWENTY-TWO and in April of the next year was detached for duty in Washington, DC, with the Weapons System Evaluation Group, Office of the Secretary of Defense, where he served until June 1957.

From July 1957 until July 1958 he served as Commanding Officer of the submarine tender Howard W. Gilmore. This assignment was followed by a two and a half year tour of duty as a member of the Naval Advisory Group at the Air University, Maxwell Air Force Base, Alabama, where he served as Navy Advisor to the Commandant of the Air College and as a faculty member. In March 1961 he became Commander Submarine Squadron SEVEN with additional duty later as Commander Submarine Flotilla FIVE, homeported in Pearl Harbor, Hawaii. He remained in this capacity until March 1962, when he was detached to become Chief of Staff and Aide to Commander Submarine Force, US Atlantic Fleet, with headquarters located in Norfolk, Virginia. Following detachment from this duty in December 1963, he reported to San Diego, California, where he assumed command of Submarine Flotilla ONE in January 1964. In February 1965 he was transferred to Washington, DC, for duty in the Office of the Chief of Naval Operations, where he served from May 1965 as Director of the Ships Material Readiness Division.

From November 1967 to February 1969 he commanded Submarine Flotilla SIX and “for exceptionally meritorious service…” in that capacity was awarded the Legion of Merit. He reported in February 1969 as Deputy Naval Inspector General, Navy Department and in May 1969 became Director of the Shore Installations Division, Office of the Chief of Naval Operations, Navy Department. He was awarded a Gold Star in lieu of the Second Legion of Merit “for exceptionally meritorious service…(in) the development and management of the Navy’s shore installations…” On June 1, 1971 he was transferred to the Retired List of the US Navy.

Philippine Defense Ribbon with one Star

Silver Star Medal: “For conspicuous gallantry and intrepidity while serving as Diving Officer and Executive Officer of the USS S-39 during the three aggressive and successful war patrols in enemy-held waters. When his ship, despite vigorous anti-submarine measures on the part of the enemy, sank an armed auxiliary vessel in Philippine waters and a hostile tanker in the Java Sea, Lieutenant Commander Bernard rendered invaluable service to his Commanding Officer by maintaining expert depth control throughout and following each attack. His courageous skill and conscientious devotion to duty contributed materially to the safety of his ship…”

Legion of Merit: “For exceptionally meritorious service from October 1967 to January 1969 as Commander Submarine Flotilla SIX…Rear Admiral Bernard was responsible for the successful operations of the flotilla, thereby contributing directly to the readiness of the Submarine Force. He initiated and implemented advanced training and management programs which resulted in the increased proficiency of personnel and the economical operation of the flotilla. Through his astute guidance and exceptional dedication, he was instrumental in enhancing the level of morale in personnel and increasing the retention rate of junior officers. As representative of commander Submarine Force, US Atlantic Fleet in the Charleston, South Carolina area, (he) was highly effective in coordinating the efforts of the tenders and support ships with the Charleston Naval Shipyard to achieve and maintain a high state of readiness of Flotilla SIX submarines. In addition, he has been Senior Officer Present Afloat during his entire tour and, as such has offered firm direction and cooperation to the Fleet units in Charleston. He has shown keen interest and enthusiasm for civic relations and community projects, establishing a rapport with the civilian community that will have lasting effect on Charleston’s Navy/civilian relationship…”

Gold Star in lieu of the Second Legion of Merit: “For exceptionally meritorious service from May 1969 to May 1971 as Director, Shore Installations Division in the Office of the Chief of Naval Operations. Rear Admiral Bernard’s guidance in planning, program and budgeting the Navy’s Military Construction Program has resulted in effective and responsive worldwide support of US Naval Forces. In addition to directly supervising Vietnamese Navy welfare programs in furtherance of the President’s Vietnamization Plan, he coordinated the planning and budgeting for a new Naval Communications Station in the Indian Ocean which is of importance to national strategic objectives. (His) personal attention and leadership in developing Navy initiatives for the Defense Family Housing Program have led the way toward substantial improvements in living conditions for all military personnel. In support of the National Program for Environmental Quality Control, he insured that all deficiencies in air and water pollution control at all naval shore installations were identified and that an aggressive program for correcting these deficiencies was pursued. As cognizant officer for physical security at all naval shore installations, he made substantial contributions to the improvement of physical security and the safeguarding of weapons, ammunition and explosives. In all the diverse areas of his responsibility, he exemplified singular dedication and skillful managerial ability…”

Bronze Star Medal; “For heroic service as Diving Officer on board the USS Puffer during the First War Patrol of that vessel in enemy-controlled waters. When his ship was endangered by temporary loss of depth control caused by damage from the enemy anti-submarine measures, Lieutenant Commander Bernard skillfully effected restoration of control and maintained it for a period of thirty-one hours until the vessel was brought to the surface and into port…”