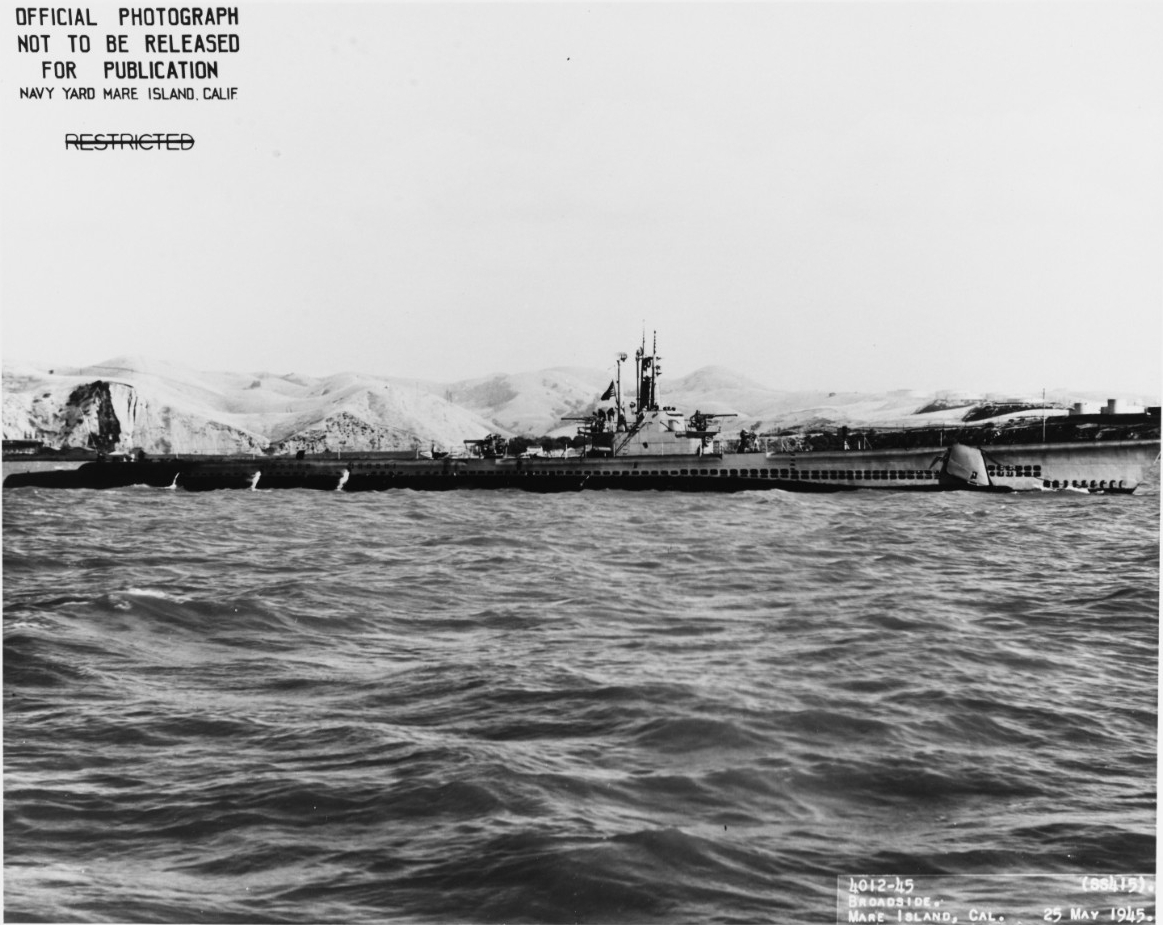 Any of numerous small scale less fish having two or more free spines in front of the dorsal fin.

Stickleback completed outfitting on 21 May 1945 and proceeded to San Diego, Calif. Assigned to Submarine Squadron (SubRon) 44, she held her shakedown cruise and multiple training exercises off the California coast from 28 May–10 June, after which she moored at Mare Island for the next twelve days.

On 25 June 1945, Stickleback stood out for Submarine Base, Pearl Harbor, Territory of Hawaii. She arrived in the Hawaiian Islands six days later on 1 July. After three days of post voyage repairs, the submarine conducted training exercises from 6–18 July.

In accordance with Commander, Task Force Seventeen, Operation Order 186-45, on 6 August 1945, Stickleback got underway for her first war patrol in the Sea of Japan. A week later, she began patrolling between Japan and the Korean peninsula. On 15 August, the submarine received orders to cease attacks against enemy vessels and remain in her patrol area.

Six days after the end of the war, Stickleback sighted two bamboo rafts with 19 survivors from the Japanese freighter Teihoku Maru, sunk by Jallao (SS-368) on 11 August 1945. Over the next 18 hours, she provided food, water and medical care to the stranded mariners and then set them afloat again a short distance from Utsuryo-do [Ulleungdo], Korea [South Korea].

Stickleback returned to Guam on 9 September 1945, and sailed for the United States the next day. Immediately after her arrival in San Francisco on 28 September, she participated in the Third Fleet parade that celebrated the return of Fleet Adm. William Halsey, Jr. to the United States. A little less than a month later, she steamed north and made port visits to Tacoma, Wash. (24 October–2 November) and Esquimalt, British Columbia, Canada (2–11 November). The submarine returned to San Francisco on 14 November.

On 26 June 1946, the Navy decommissioned Stickleback at Mare Island and attached her to the Pacific Reserve Fleet. She remained in reserve for the next five years. 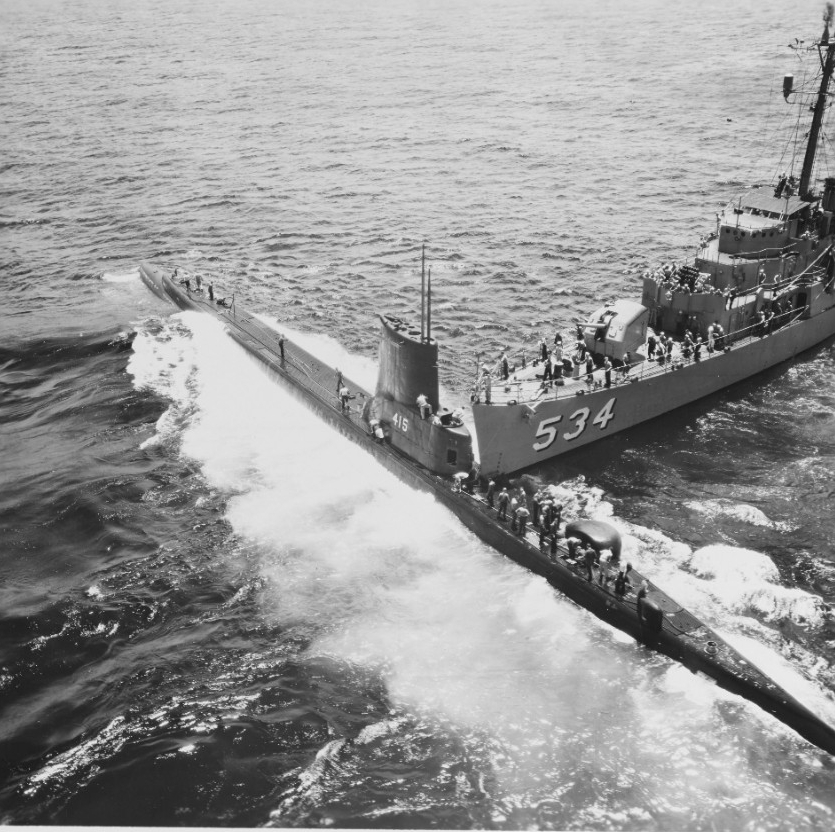 Because of the outbreak of the Korean War on 25 June 1950, the Navy recommissioned Stickleback on 6 September 1951, Lt. Cmdr. Roy J. Robinson in command. Assigned to SubRon Five, she conducted training operations off San Diego, Calif. for the next year. On 14 November 1952, she was decommissioned at Mare Island for a second time and began conversion into a Greater Underwater Propulsive Power (GUPPY) Type IIA submarine.

Over the next ten months, Stickleback received an upgraded battery, sonar, the Mk. 106 fire control system and a snorkel. She was recommissioned on 26 June 1953, Lt. Cmdr. Robert H. Gulmon in command. Shipyard workers completed her conversion on 9 September. Reassigned to SubRon Seven, the submarine stood out of Mare Island en route to Pearl Harbor a week later.

After her arrival in the Hawaiian Islands, Stickleback conducted drills and training exercises until early 1954. Reassigned to Submarine Group Western Pacific, she departed Pearl Harbor en route to Yokosuka, Japan on 5 January. Twelve days later on 17 January, the submarine made a brief ten-hour port visit to Chichi Jima Naval Base. She moored at her new homeport two days later.

Stickleback got underway on her first Cold War patrol at 1557 on 29 March 1954. Two days later, she transited through the western entrance of Tsugaru Strait. Over the next four weeks, she made contact with 29 Soviet ships, 15 of which were photographed, 14 were sketched and 13 were tentatively identified. The submarine transited back through the Tsugaru Strait on 23 April and moored at Yokosuka two days later. She returned to Pearl Harbor on 2 July and conducted training exercises in the Hawaiian Islands for the next year.

On 27 July 1955, Stickleback stood out of Pearl Harbor on her second Cold War patrol. A week later, she sighted several small islands in the Aleutian Islands chain off the coast of the Territory of Alaska. On 8 August, she rendezvoused with Tang (SS-563) fifteen miles west of Chibukak, T.A. Two days later, she began a reconnaissance patrol in the shipping lane between Cape Chaplino, Soviet Union and the Bearing Strait.

At 0639 on 15 August 1955, the submarine’s snorkel flooded, forcing her to depart from her patrol area and surface at 1153. Two sailors donned shallow water diving suits and inspected the boat’s external piping. Fortunately, the inspection found the snorkel piping in good condition. The submarine returned to her patrol area and submerged without incident.

Three days later on 18 August, Stickleback sighted and photographed two Sverdlov-class cruisers steaming in company with multiple naval auxiliary ships and twelve submarines at 0242. The next evening at 2221, she photographed twelve Kronshtadt-class submarine chasers at only 1,000-2,000 yards. Only a couple hours later at 0100 on 20 August, she identified and photographed the Soviet submarine tender Neva.

On 9 September 1953, Stickleback briefly rendezvoused with Carp (SS-338) from 0750–0936. She completed her patrol and set course for Pearl Harbor via the Amukta Pass two days later. The submarine returned to the Hawaiian Islands on 19 September. Overall, Stickleback made contact with 149 Soviet ships, including 55 naval vessels, during her nearly two-month patrol.

Stickleback underwent a routine overhaul at the Pearl Harbor Naval Shipyard from 30 September 1955–10 February 1956. She subsequently engaged in a month of training before steaming to Yokosuka, Japan on 9 March. After her arrival in Japan, she went into drydock in an unsuccessful attempt to remedy a squeal emanating from her port shaft. Despite the noise, Stickleback deployed on her third Cold War patrol at 0544 on 10 May 1956.

On 23 May 1956, Stickleback detected and recorded multiple underwater explosions throughout the day. The same day she sighted the Soviet hydrographic research vessel Vityaz and a Skoryy-class destroyer, which led her to conclude that the explosions were likely related to hydrographic experimentation. Unfortunately, her malfunctioning port shaft limited the submarine to only fourteen days in her designated patrol area, east of North Korea at latitude 40°30'N to longitude 137°00'E. She ended the patrol and moored in Yokosuka at 0200 on 1 June.

Rather than returning to Pearl Harbor, Stickleback remained in Yokosuka. On 20 June 1956, she steamed to Hong Kong for six days of leave and recreation. On 2 July, she departed Hong Kong en route to Kaohsiung, Republic of China [Taiwan], where she operated from 3–7 July. At the conclusion of operations off Taiwan, Stickleback operated with Task Group 70.4 from 7–27 July. She returned to Yokosuka and underwent a routine maintenance and repair period from 27 July–9 August. Two days later, the submarine made a brief recreational visit to Tokyo (11–12 August) followed by two days of operations in Sagami Bay, Japan. Stickleback returned to Yokosuka on 14 August and entered a second routine maintenance period the next day.

Stickleback stood out from Yokosuka on her fourth Cold War patrol on 24 August 1956. A week later, the submarine arrived in her assigned patrol area, the shipping lanes off Petropavlovsk, Soviet Union. Over the next several weeks, she photographed and collected sonar information on 119 Soviet vessels. She ended the patrol and moored at Pearl Harbor on 10 October.

On 6 June 1957, Stickleback stood out of Pearl Harbor on her fifth Cold War patrol. During this patrol, she returned to the Siberian coast and patrolled the shipping lanes between Petropavlovsk and Provideniya, Soviet Union. During this brief patrol, the submarine collected intelligence information on 40 Soviet ships before returning to Pearl Harbor on 26 July.

On 28 May 1958, Stickleback participated in an antisubmarine warfare exercise with Silverstein (DE-534) and a torpedo retriever boat off Oahu, T.H. The exercises continued into the afternoon of the next day when the submarine completed a simulated torpedo run on Silverstein. As Stickleback was going to a safe depth, she lost power and broached approximately 200 yards ahead of the destroyer escort. Silverstein backed full and put her rudder hard left in an effort to avoid a collision but holed the submarine on her port side.

Stickleback's crew was removed by the retriever boat and combined efforts were made by Silverstein, Sabalo (SS-302), Sturtevant (DE-239), and Greenlet (ASR-10), to save the stricken submarine. The rescue ships put lines around her, but compartment after compartment flooded and, at 1857 hours on 29 May 1958, Stickleback sank in 1,800 fathoms of water.

Stickleback was struck from the Naval Register on 30 June 1958. 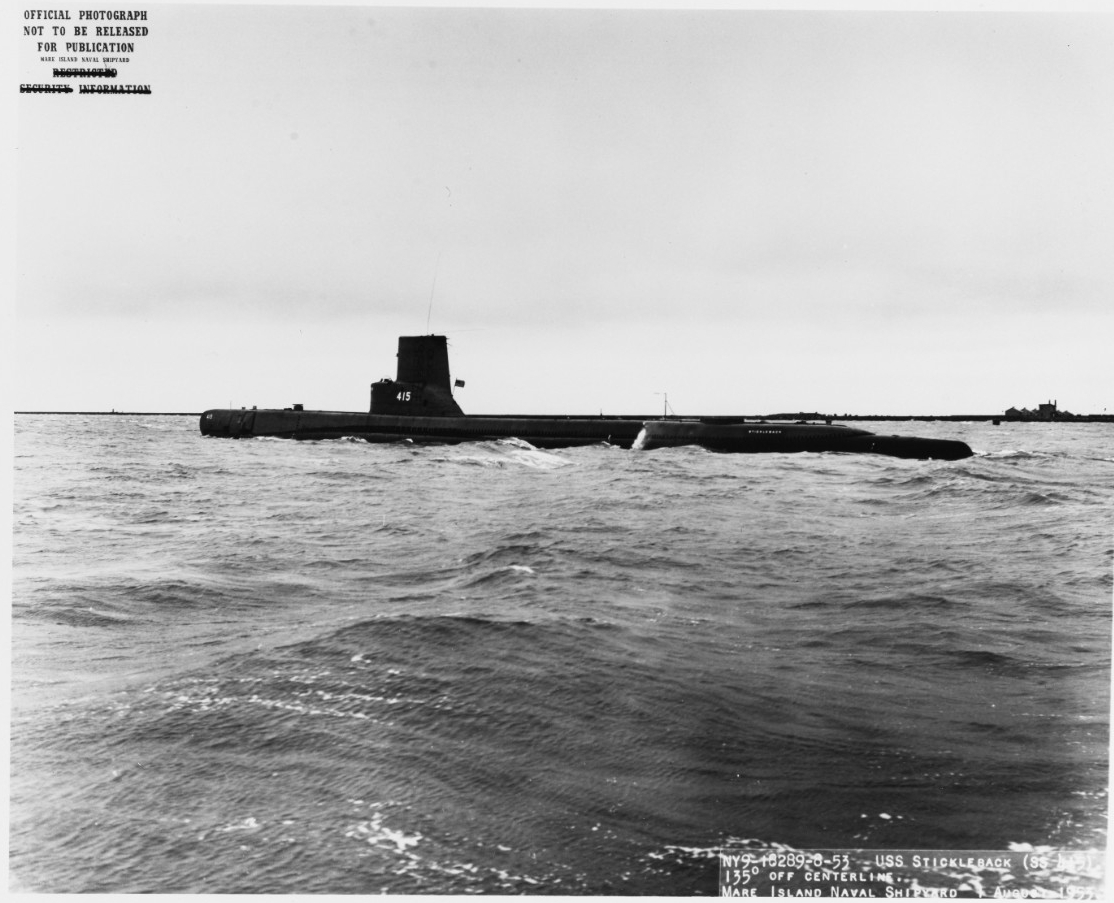