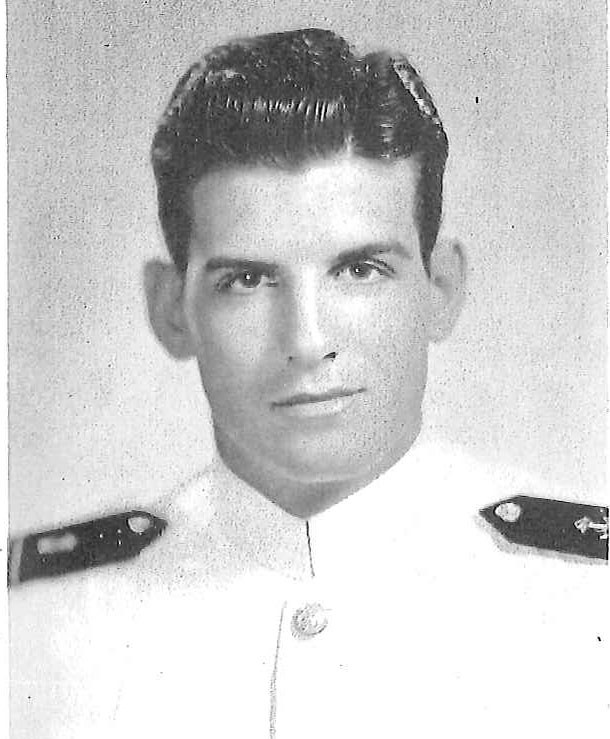 Charles Becker was born in Kaufman, Texas, on July 3, 1921, son of George and Florence Minerva (Nash) Becker. He attended Kaufman High School and Texas Military Academy at Terrell, prior to entering the US Naval Academy, Annapolis, Maryland, on appointment at large in 1940. He was graduated and commissioned Ensign on June 9, 1943, with the Class of 1944 (course of instruction reduced to three years due to World War II). Advancing progressively in rank, he attained that of Rear Admiral, to date from July 1, 1970, having transferred to the Supply Corps of the US Navy in January 1948.

Following graduation from the Naval Academy in 1943, he reported on board USS Braine (DD-630) and while on board that destroyer participated in the Treasury-Bougainville and Bismark Archipelago actions; Wake Island raid; capture and occupation of Saipan; Leyte and Lingayen Gulf landings; assault and occupation of Okinawa Gunto; Mariveles-Corregidor action and landings on Mindanao Island. Detached from Braine in November 1945, after the cessation of hostilities the previous August, he next attended the Gunnery Officer Ordnance School, Washington, DC, and in April 1946 joined USS Holder (DD-819) to serve as Gunnery Officer, Executive Officer and Navigator.

From July to December 1947 he was a student at the Navy Supply Corps School, Bayonne, New Jersey, after which he served as Assistant Supply Officer at the Marine Corps Air Station, Quantico, Virginia. He remained there until October 1948, when he reported as Assistant to the Supply Officer at the Naval Air Station, Jacksonville, Florida. In August 1950 joined USS Minos (ARL-14) as Supply and Disbursing Officer and in August 1951 was detached for graduate instruction at Harvard Graduate School of Business Administration, Boston, Massachusetts, from which he received the degree of Master of Business Administration, with honors, in June 1953.

Following an assignment as Assistant to the Supply Officer at the Naval Supply Depot, Scotia, New York, he reported in July 1954 as Assistant Director of the Special Projects Division, Bureau of Supplies and Accounts, Navy Department, Washington, DC. In April 1955 he transferred to the Office of the Chief of Naval Operations, Navy Department, where he served as Supply Assistant in the Foreign Military Assistance Branch, Material Division until November 1956. In January 1957 he joined the Staff of Commander Service Squadron THREE as Supply Plans Officer and in January 1959 reported as Director of the Equipment Support Division at the Electronics Supply Office, Great Lakes, Illinois.